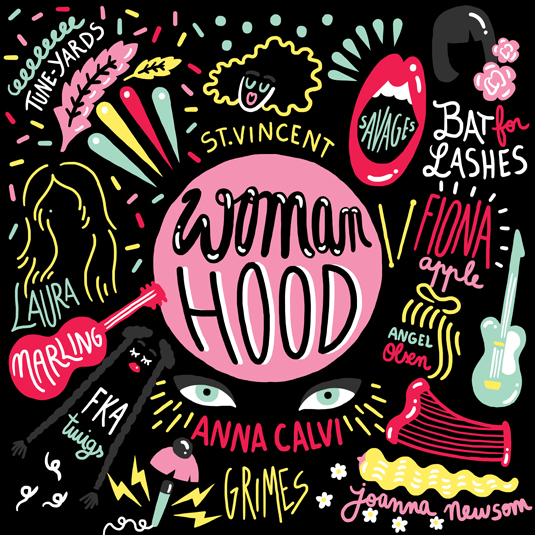 On International Woman’s Day, I found myself musing over all the intelligent, talented female musicians and artists the world has to offer at the moment. And I thought about how it’s a shame that my sister isn’t really at all exposed to any of it. I feel like, growing up in the 90s, there was a lot more diversity offered to us – in the cartoons and the mainstream media there was a greater crossover with the counter-cultures or the ‘alternative.’
I am getting older though. And this may just be an inevitable rant about how ‘the music was so much better, back in my day… Last decade…’ Today, it seems, the greatest diversity, is of pop reality shows that spout out the same superficial, mass produced, industry made sound; originality and weirdness is condemned; and talent and creativity, although not sparse, is well hidden. Which is a shame, because the contemporary pop positions were so essential in opening my eyes to a broader spectrum of music. It was artists like these, who made me realise that the best song isn’t always the single, it’s ok to not be conventional, and there’s a lot of great skilful, autonomous and individualistic music out there, which in turn opens you up to a world of music history.
So, without further ado, here’s my list. Woo girl power:
tUnE-yArDs // Merril Garbus of the tUnE-yArDs is most definitely my girl crush at the moment. She has completely subverted the way that I think about music performance and composition. The development and set up becomes part of the music in a captivating way, so skilfully, that I’m sure if she tripped in the stage and brought the whole set down with her , she would work it into the piece and it would be amazing. The main reason my sister should be listening to tUnE-yArDs, though, is the way she makes different music, that is so enjoyable and fun that I become so caught up in enjoying it that I don’t think about unusual structures, sounds or instruments.
St. Vincent // The way that Annie Clark aka St. Vincent synthesises modern technology and pop music with 80s dance synth (no pun intended) is a nice refreshing take on contemporary pop music . After working with David Byrne, her style seems to have altered dramatically, but she has maintained the catchy riffs, blending off beat rhythms and melodies, sexy guitar shredding and a musical voice, that can somehow achieve those weird intervals, effortlessly. St. Vincent is great because: it is her aim to make accessible pop music; her roots are diverse and eclectic; her image and alter ego is super cool and inspired; and on her new album, she talks about stuff that’s current and relevant. While St. Vincent does have a very distinctive sound and voice, she is still very versatile and is consistently exploring different styles and genres.
Savages // An all female band, from the UK, that are modern and post-punk? What more could one ask for? Seeing the Savages live is most probably closest I can get to feeling like I was alive in the late 70s when post-punk was coming into itself. Savages are channelling Sex Pistols, The Clash and PiL vibes as well as other strong female roles The Slits, Patti Smith and Siouxsie and the Banshees. The music is original and thought provoking, as are the lyrics. And the band are so effortlessly cool, in black tops and jeans, nonchalant attitudes, and a sudden, immense talent. Just check out the drummer’s upper body strength.
Anna Calvi // There is nothing conventionally kitsch or female about Anna Calvi, the way she dominates and usurps attention, at the centre of the stage, with a solid stance and simple outfit, is effortless and intrepid. On top of that, she taught herself to sing and play the guitar, and her songs demonstrate this keenness and ability. I was lucky enough to see Anna Calvi live at End of The Road festival, and that powerful, tuneful voice is really coming out of  that mouth, which is really situated on that tiny body, and is definitely something worth seeing.

Fiona Apple // Fiona Apple’s honest and intimate lyrics are chillingly obsessive and penetrating, delivered in that rough, knowing voice that. Her music, while always outside the norm and super interesting, is consistently progressing. Each album is distinctly different from the last whilst still in keeping with that Fiona Apple sound that her fans love so much. One thing that’s particularly great about Fiona is that she is someone who’s not afraid to get angry. She doesn’t feel she has to undermine her integrity or conform to a squeaky clean female pop image. Her early work combined all of the best things of the grungy 90s era, and could be a good way to get into that style – from Cat Power, PJ Harvey and Sonic Youth, to the whole riot grrrl thing.
Angel Olsen // Angel Olsen nicely proves that there is a lot more to singing than annoying vocal acrobatics and staying in tune. She experiments with the sounds her voice can make in a piquant and hauntingly beautiful way. Her stripped back guitar playing compliments and highlights her vocal talent and dark lyrics.
Angel Olsen’s latest album Burn Your Fire No Witness is out now.
Laura Marling // Laura Marling has an understated, yet effervescent talent, that has developed a large and diverse following. Her taste in music is so eclectic and mature, and is obviously a large part of the reason her music speaks to so many different people. She immensely talented at both music and song writing and greatly independent and autonomous. Laura also puts on a great show without the need for false theatrics and drama; the attention is solely on the instrumentalists and her playing, yet she commands the attention of all and has such great stage presence.
Joanna Newsom // While there’s probably a whole list of instruments that women don’t usually play, you rarely see anyone singing whilst plucking a harp. The technical skill and complex intricacies in the abundant compositions that Joanna Newsom boasts, make it impossible to watch her sing and play the harp, without falling in love. Joanna has a  unique voice, whose  tones allude to the musical Goddesses, that are Kate Bush and Björk. The lyrics also create a depth and colourful atmosphere, evoking images of Kit Williams and Lewis Carroll (off topic, but stay with me), feeding the imagination in an extraordinary way.
FKA Twigs // FKA Twigs’ position in this list encompasses a whole movement of electronic, alternative R&B that is spearheaded by cool women, including Jessie Ware, Julia Holter, Ryat, Quadron and Anna Wise of Sonnymoon, to name a few. As well as subverting the image of female sexuality and power through her music and videos, FKA Twigs (or Tahliah Barnett, as she’s probably known to her friends) also contemporises soul music in a way that speaks to young people.  The provocative and minimalist simplicity, wildly popular at the moment, also echoes remnants of Trip Hop pioneers, Portishead.
Grimes // Well for a start, she’s unashamedly weird, in both her sound and her look. Grimes (aka Claire Boucher), like FKA, is modernising the electronic and R&B movement in an innovative way. The interesting ways that she plays with technology, her voice and her surroundings, making her music an interactive experience, shows how key creativity and originality is, in making music. The unusual music she makes is catchy  and dancy, and something that basically anyone can get into. In this way, she’s quite similar to Little Dragon (who gets an honourable mention here) for making upbeat, fun and modern electronic music. By also dj-ing, sampling sounds and just being electronic, Grimes fits a quite standard boyish image. She tops this off with a geeky young female look that’s natural, unself-conscious and unconventional. I definitely wish I had Grimes when I was younger. Also she kind of reminds me of Jiggly Puff from Pokemon.
Bat For Lashes // Her voice is dark and mystical  She’s a talented, multi-instrumentalist, who makes music that stands starkly in contrast with that of her contemporaries. Natasha Kahn makes immersive music that is both mysterious and catchy, delicate and fierce, upbeat and sombre, and has a domineering and eclectic sound.  There’s a great artistic presence behind her image, and she’s developed a persona that isn’t particularly feminine or masculine. By doing this, she draws attention to the sound and art – her album covers are understated, and aesthetically appealing, while challenging ideas of sexuality.
If my sister liked Bat for Lashes then we could start talking about other modern female vocalists who play the piano. We’d start at Agnes Obel and Regina Spektor. And from there I’m sure she’d like Lykke Li, or, at least, Florence and The Machine. We would talk about PJ Harvey’s piano album and how it is possibly her best album, from an objective viewpoint. Then perhaps she would say that, while she agreed, Dry was, for her, definitely a fave. And I would say I feel the same about Rid Of Me. But I digress…
::
Exclusive illustration by Marylou Faure]]>