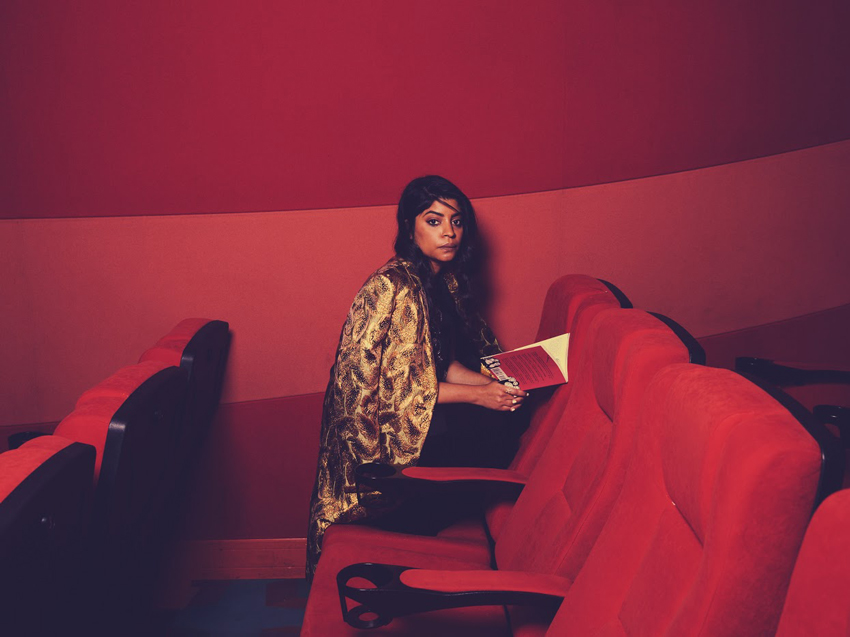 I read somewhere that creativity is the new gold rush; a new monetary and social currency.

The way the world is evolving, with tech taking over and natural resources getting limited, I truly believe a mental shift is underway and a new world order is taking shape.

A self-described ‘artist who is currently making films’, Kenyan born Amirah Tajdin is the co-founder of the dynamic visual agency, SEVEN THIRTY Films. Back in 2014 she took part in a Connect ZA project that brought together a sharp and savvy selection of South African and UK creatives. Since then, she’s been working between Africa and the Middle East, with a long view to ‘make a mark’ on African cinema in and beyond the continent. Visual themes of urban life in documentary shorts such as the UAE-located Baqala, or challenges to Kenyan ideals of beauty and sexuality in her 2011 Flourescent Sin highlight an inquisitive – and mesmerising – visual language that’s sometimes playful and always aesthetically driven. In a recent conversation, she shared some thoughts about her past, present and upcoming work.

Q) The last time we spoke you were splitting your time between two cities; Nairobi and Cape Town. Now you’re based in the Middle East. When did you make this move and how have the different locations influenced your work?

I moved back to Dubai at the end of 2014. Before that I was between Kenya and South Africa for eight years, although I still make time to spend a few months in either space over the summer. In terms of how every city impacts me, my friends in South Africa nourish my soul in completely different ways. Nature in Kenya and South Africa also play a big role in my inspiration. The Middle East reminds me that I come from so many histories and pushes me to constantly want to play the commercial game. It also provides me with nostalgia for my young adulthood that feeds my creative process in my film work.

Q) Can you give a sense of how and why SEVEN THIRTY Films was set up – and what its creative vision is?

It was founded by my sister, Wafa Tajdin, and myself when we moved back to Nairobi in 2011 and started our journey as a creative duo. She’s the producer and handles all the business side of things while I’m the director who handles the creative side. We hope to one day grow large enough to truly make a mark on African cinema in the continent and the world over, bringing along with us fellow talented film makers and image weavers. We’re both story tellers and this is our chance to share.

Q) What kind of work are you doing at the moment?

I’m taking photos again and the past two months had me doing an online radio show called Cassette Love Letters where I would interview my friends on the state of modern romance while playing love songs. It’s a creative outlet I needed during the commercial season out here.

Q) In the past you said in the next five years you’d like to be on the set of your third feature film ‘with an amazing budget and lots of horses’. Are you on your way to that project – or have you taken a creative detour?

Oh to be young and full of hope! Well, I’ve still got two years to go for the manifestation. Fortunately no creative detours have been taken, just growth and patience. I’m on my way to my first feature film; it doesn’t have horses, but I’m hoping to land a commercial job with horses, soon. Wish me luck for my pitch.

Q) I remember watching a trailer for a lovely film you were working on called Ornate African. Is this going to be feature-length?
I ended up revisiting the subject in a different city. I made Raw Metropolis, which is set in Dubai and takes a similar structure. Unfortunately the executive producer on Ornate African – which became DOWNTOWN TRIBES – never came through for us with the finishing funds. I’m hoping to pitch something similar for one of the AFROPUNK fests next.

Q) Street style is regularly featured in your work. Are there additional themes you explore?

Yes – in my commercial work. It’s almost anthropological and I guess in a way I’m always drawing from social norms, graces and pariah’s, especially when it comes to documenting the marginalized and more magical elements of society.

Q) Do you think there’s more respect for the creative industry within your chosen environments, compared to a few years ago?

Entirely. I read somewhere that creativity is the new gold rush; a new monetary and social currency. The way the world is evolving, with tech taking over and natural resources getting limited, I truly believe a mental shift is underway and a new world order is taking shape. We’re still figuring it out, but with limited resources comes greater creativity and as long as there’s money to be made or future generations to be secured it will be respected and given its space.

Q) Have you felt this directly?

Yes. A great example is the mega rise of instagram over the past four years. As a creative platform of expression, narcissism, personal worth, social currency, business revenue and political statements it’s creativity at its best and worst. I hire cinematographers based on their instagram feed photos.

Q) Which current or future projects are you most excited or anxious about?

My feature film, Hawa Hawaii, which is set in Mombasa and will be filmed there. I’ve been developing it for the past four years and now I’m ready to just make it. We’ve just begun the financing and hopefully it will all come to pass soon.

This interview comes from a partnership between Let’s Be Brief and People’s Stories Project (PSP) — part of the British Council’s arts programme in sub-Saharan Africa. Click here for more info.