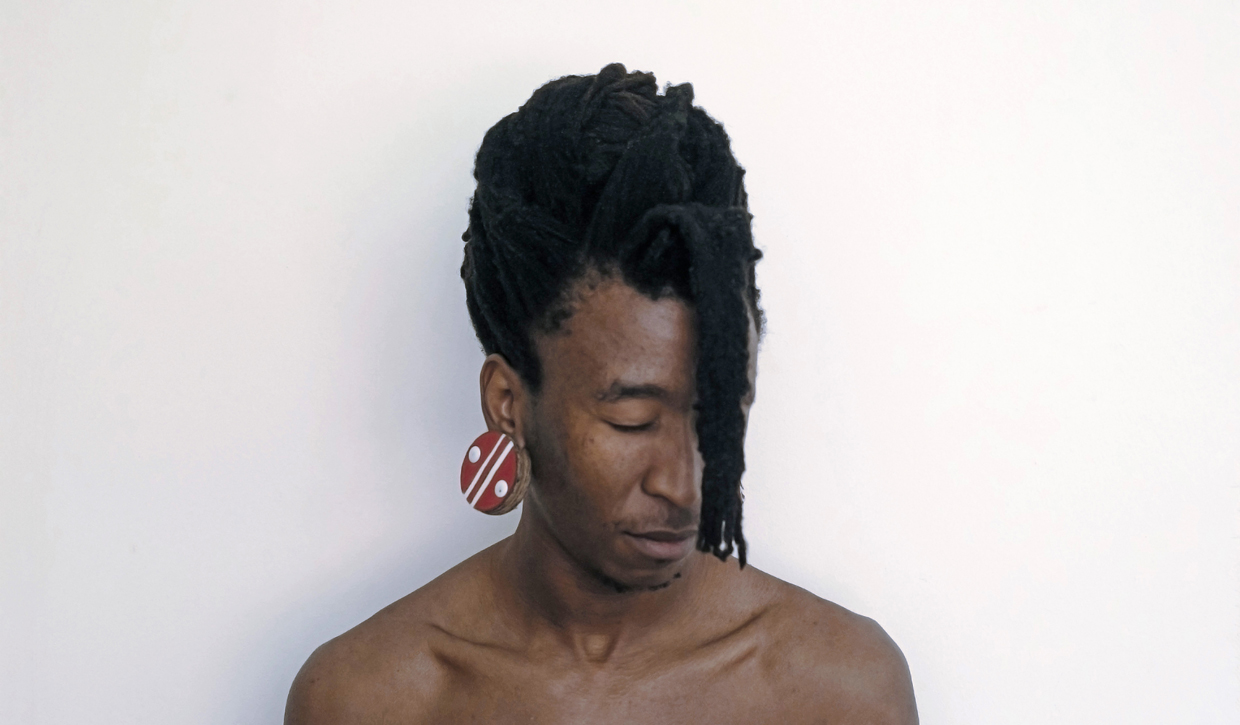 Most of us city boys had no clue or even interest in understanding manhood and our masculinity.

At the end of last year, Cape Town-based street photographer Toka Hlongwane took part in a group exhibition focusing on gender and space. A Gender took place at the city’s Slave Church Museum and featured a selection of images documenting his personal experiences of manhood. His self-styled photographs carry titles including Departed Innocence, Harden Up, Not Your Regular Man and also Right of Passage and The Offering – both of which were shot inside a Thokoza poultry factory in Guateng.

Part of an ongoing series, these photographs continue to spark fragmented memories and musings on his and others’ demonstrations of masculinity – local, global as well as in pop culture.

I was predominantly raised by my maternal relatives and brought up with Basotho traditions. However, because I was born in urban Johannesburg, my family and I have been heavily influenced by some of the city’s culture. Some of my Basotho friends don’t subscribe to our traditional culture for a multitude of reasons – from religion to simple detachment. As kids, most of us city boys had no clue or even interest in understanding manhood and our masculinity. Many of our ideas about being men came from ghetto scientists who would dwell on street corners.

In 1999, I was 11 years old and living with my retired grandmother. Around the corner from our house there were shops arranged in a semi-circle row called ha maMoloi (ms Moloi’s). Like most township kids, my friends and I would be fascinated by the colourful characters around there. We knew them by name. They were our neighbors; some were family members. These were guys aged between 15 and 35, ranging from high school dropouts, former self defense unit comrades from the Civil War, gangsters, car thieves and formerly exiled Mkhontho we Sizwe militia (ANC’s military wing) who came back to South Africa and couldn’t find jobs. They might send one of us on an errand to buy cigarettes, and this little acknowledgment would drive us insane. Within a year, I was smoking cigarettes and weed and slowly ridding myself of normal childlike behaviour. Although it was done in secret and fear, nothing felt better than hearing one of the older guys who’d catch us, angrily telling his friends that “lei ntwana se ziya bema, aboJuvenile se gu abokleva manje” (these boys are smoking now. These juveniles think they’re  smart kats).

Years went by, and when it was time for high school I was shipped to a boarding school on a farm, four hours outside of Joburg. The bullies and wannabes didn’t scare me much. By the first week of school I asserted myself as no push over by stabbing a kid named D.O.C (Dog of Corruption) with a fork. I wasn’t a thug but the environment I was brought up in short-lived a huge chunk of my childhood.

As I came of age, certain traditions did start to be expected of me. One, was the ability to slaughter an animal as an ancestral offering. As a Mosotho city boy, this duty had eluded me since, quite frankly, there were no sheep or livestock to practice this on. Relatives from rural parts of the country would look at me and even address me as a ‘sub man’ compared to them. By 28 – and as the first child and son – I eventually garnered the strength to kill a sheep as I had to lead a thanksgiving and cleansing ceremony after my father’s passing. An exercise that normally takes five minutes to execute took twenty. I squirmed and agonized trying to psych myself to finally slit the poor animal’s throat, while my rural uncles and relatives gave me ignominious looks that loudly shouted “fucking sissy.” However, I knew they would no longer question my masculinity in this regard.

As a contemporary African man what does masculinity even mean to me? The answer to this question can no longer be provided by our community leaders, our fathers or mothers. Slaughtering the sheep brought me no closer. I’ve interrogated my own masculinity and that of black men around me and I realise that most of us have no clue what we are doing and who we are. African masculinity is a vague and equally vexed study that has been largely analyzed by western scholars, who aren’t of African descent and have often missed the pulse of the African man’s rhythm.

For the longest time, the African man has been seen as a tool or entertainer. In the South African context, when mines were discovered by the British and the Dutch, men were taken in droves from their rural homelands to provide cheap labour in the newly found pots of gold. The black family structure was indefinitely disrupted, with men becoming financial providers and not a holistic presence in their family’s lives.

But now, with the fluidity of sexuality, the idea of masculinity or femininity has become somewhat mundane. I‘m not an expert on the topic and nor will I ever be. However, as an African man I have witnessed various rich and deeply rooted humanism tools in diverse African traditions and cultures that could be rebuilt and made credible to aid the modern black man. Although we had gender roles set out by our traditions, they didn’t exist out of malice to oppress one or the other. Each role contributed to the betterment of the society, men and women were like a key and padlock, serving different purposes that were equally reliant on the other. The ceremonies involved in separating children from adults aren’t exclusively African and have worked for the west and other cultures worldwide. Think about the school system as a rite of passage and graduating being the coming of age. It’s no different to the “pure” African traditions that exist, that can be revisited to facilitate a moral regeneration of African masculinity. Maybe it’s a utopic approach, but as modern Africans we have explored and experimented with other cultures more than we have our own, and with the new wave of wokeness and Pan Africanism that has hit pop culture and our world, one can only hope that issues of masculinity, femininity and sexuality can also be addressed and interrogated thoroughly so that we can return to our padlock and key relationship as a race.

These words by Toka Hlongwane come from a partnership between Let’s Be Brief and People’s Stories Project (PSP) – part of the British Council’s arts programme in sub-Saharan Africa.

The text is extracted from a longer conversation between the artist and PSP.

All images courtesy of Toka Hlongwane