Be More Dog? I’d rather ‘Be More Cat’ 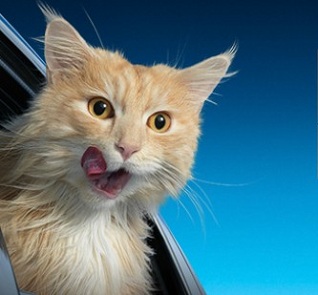 If you live in the UK you have no doubt noticed the “Be More Dog” O2 advertising campaign that launched in the summer. As a £10 million campaign you’d expect it to be everywhere but my cynicism can’t let go of the fact that the dog / cat concept is a bit abstract. It took me awhile to work out what the campaign was saying, as it wasn’t immediately obvious that it was an O2 ad – and I work in advertising. I completely get the thinking – O2 want to stand out as a fun and exciting brand. The ‘insight’ that the agency, VCCP (of meerkat fame), have uncovered is a good one. It’s true that many people these days are desensitised to the amazing new technology available and also that daily life can be mundane. It’s also relevant for O2, a mobile provider, to be promoting new technology and trying to get people excited about it, at a time when the world produces a new tech revelation each day. Despite this, I can’t help thinking that unless the TV spot is the first thing you see, the campaign just doesn’t make sense. A cat with a stick in its mouth might grab my attention but does it communicate anything to me about O2? The fact that they have had to create a YouTube video titled Be more dog & the theory behind it speaks volumes. The use of animals, however, is definitely a smart idea. Animals get a lot of airtime on the internet and cats do particularly well virally, so I can see what they were thinking: “A video of a cat behaving like a dog will be viral gold.” The 2 million plus views of the TV spot on YouTube would seem to confirm this, but in reality I think they’ll be disappointed with that number (consider that Nokia’s recent phone ad has double that already). I think my concern with the whole campaign boils down to the question – are cats really that boring? If the Internet is anything to go by cats do just as many weird and wonderful things as dogs, maybe even more so. On top of this, cats are renowned more for being smart or cunning than they are for being boring. I’d argue dogs are more widely known for being over-excitable and stupid. So O2 are effectively saying, “Be more of a dumbass – chase your tail and get excited about even the smallest thing”. Now I’m a ‘dog person’ but… which would choose the best phone network – the cunning cat or the excitable dog? But maybe it’s too early in the campaign and I’m being a bit harsh – it’s certainly one of the biggest and most consistent integrated campaigns in a while and uses some interesting new digital technology. Throwing a Frisbee from my iPhone to a cat on my laptop, while completely pointless, was lots of fun. I’m also interested to see if Julian Barratt will be replacing Sean Bean as the voice of O2. I hope so.]]>

One response to “Be More Dog? I’d rather ‘Be More Cat’”