Chimurenga Night at State of Independence 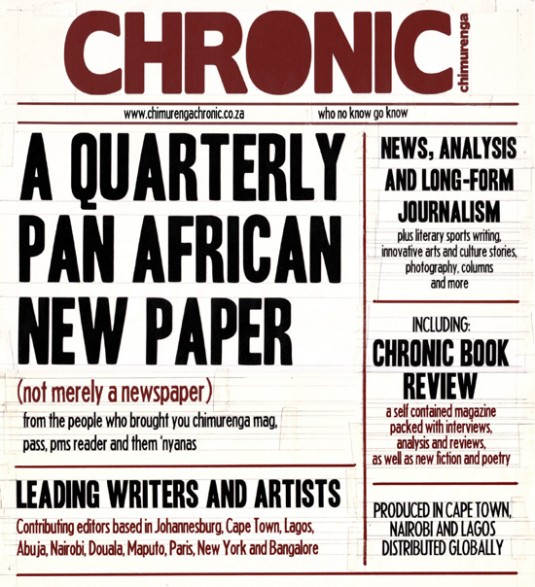 Chimurenga: “ a project-based mutable object, a print magazine, a workspace, and platform for editorial and curatorial activities”.

Founded by Ntone Edjabe, Chimurenga has manifested in print since 2002 as a pan African journal of writing, art and politics. A literary journal? A magazine? However it’s packaged, the printed matter – poetry, essays, written stories and other graphic tales (illustrations, photo essays, comics) – inform, question and reshape the way we view our world. Chimurenga’s current print project epitomises this: a quarterly gazette in the form of a new(s)paper, the Chronic.

In Lagos in the 1980s, Ntone studied under Fela Anikulapo Kuti. Felasophy learned at the Kalakuta Republic is integral to the message and modes of Chimurenga. Unchained from (neo-/post-)colonial hang-ups, the critical thinking, and articulate visual and written commentaries published, elevate Chimurenga above any other organisation and publication I’ve come across. (If you know of a comparative sibling please share)

At State of Independence on Tuesday evening, I’ll be presenting a range of Chimurenga’s outputs and insights. Displaying their printed matter, (re)playing their visual and sonic projects, entering their library. All being well a selection of London-based Chimurenga people will also contribute.

As Chimurenga say, like Fela said, simply: who no know go know.

One response to “Chimurenga Night at State of Independence”