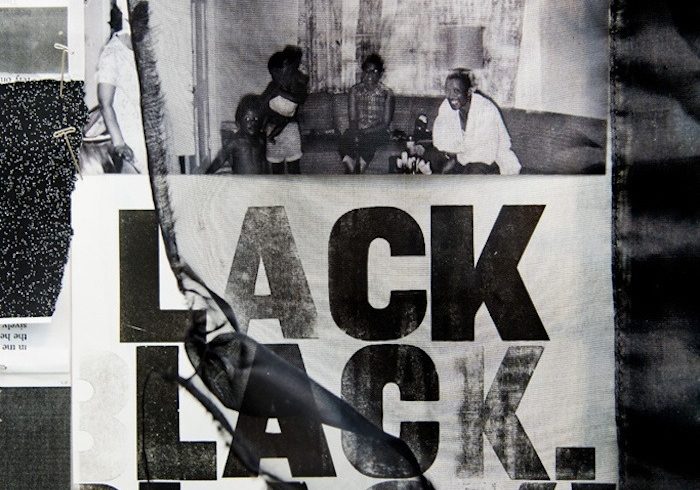 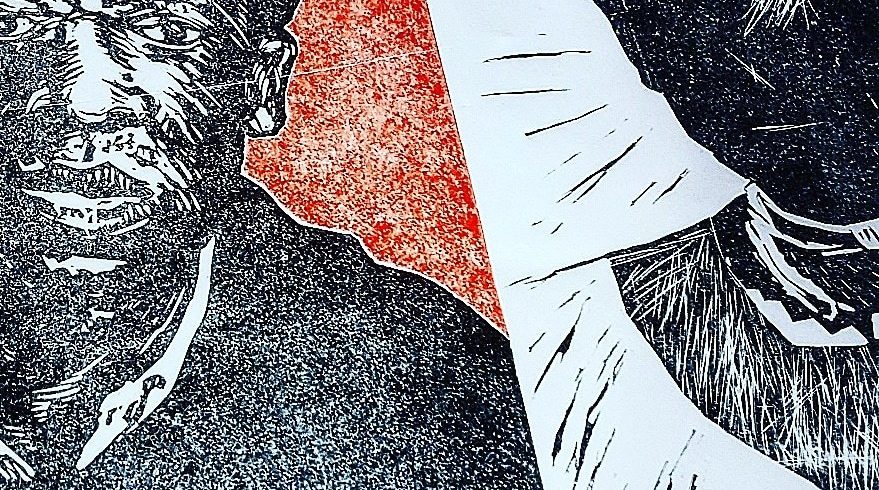 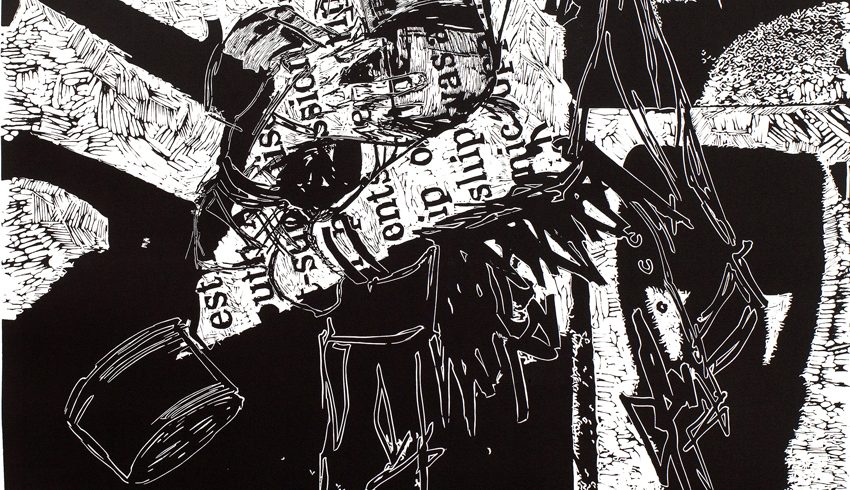 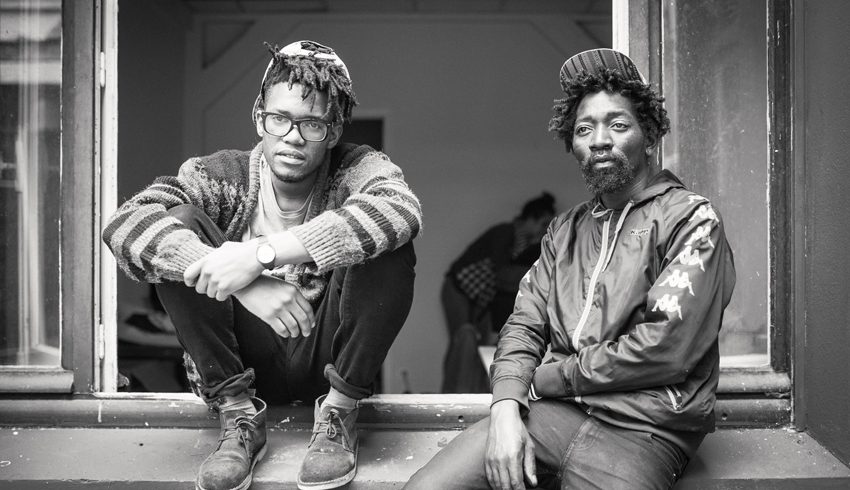 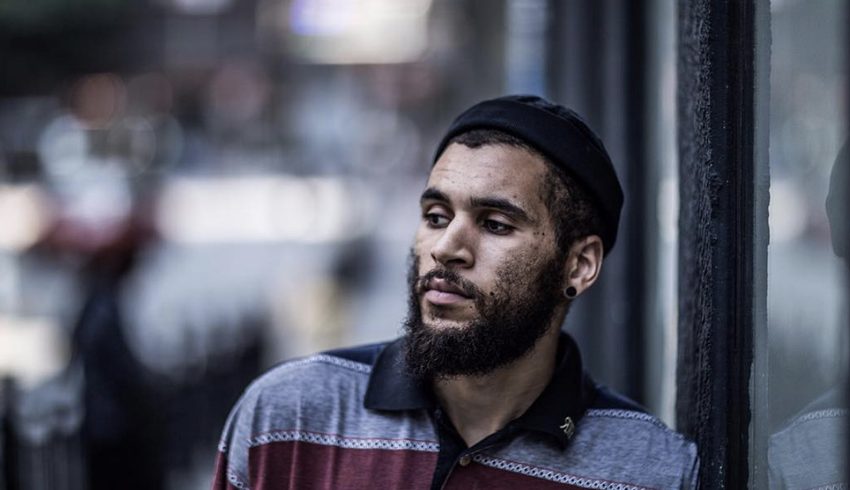 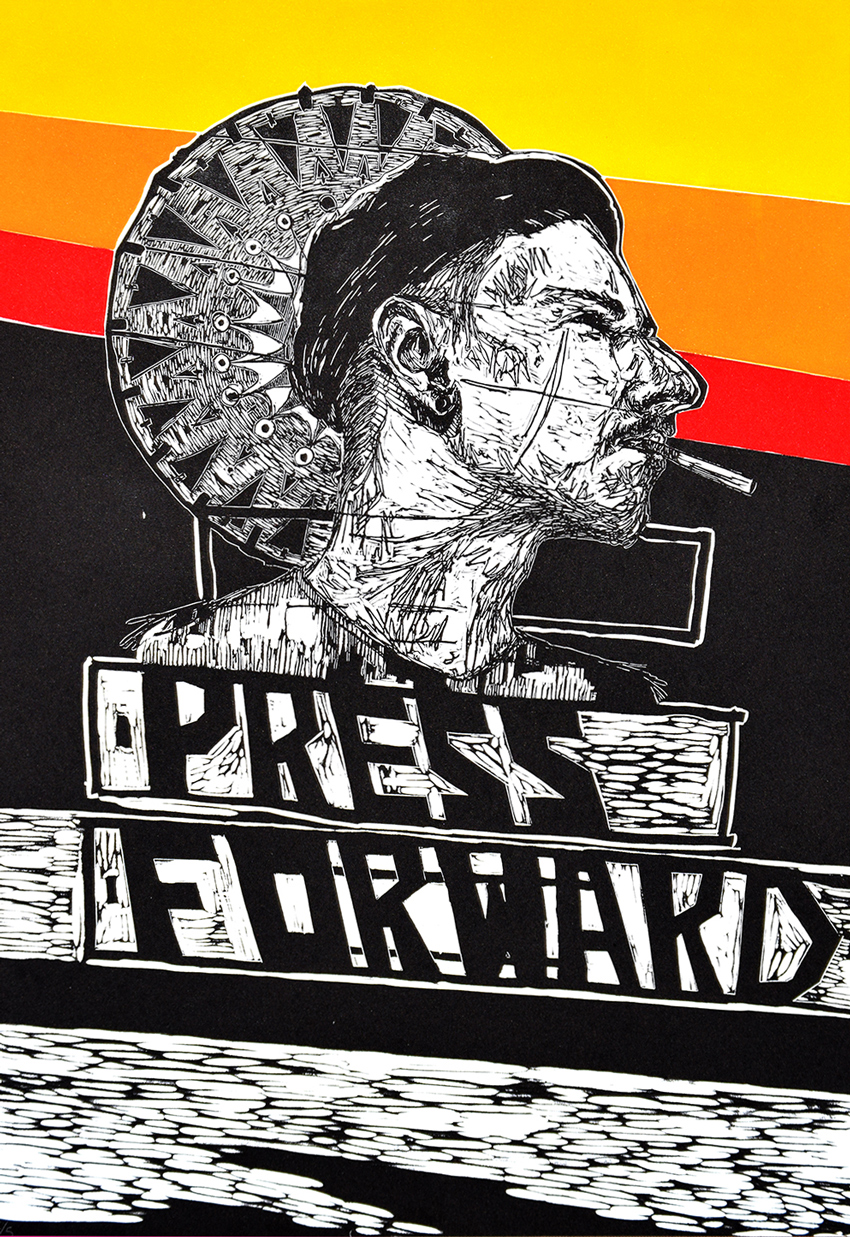 I’m attracted to things that others consider tacky, I like to go where others think its lowbrow and push the boundaries there – Nathaniel Sheppard

This is where Minenkulu Ngoyi of printmaking collective Alphabet Zoo and Nathaniel Sheppard of DGI Studio welcome me — and where we talk about personal productivity, passion, collective creativity, the South African art market and the politics of space. We reflect on their respective journeys as young, black male artists reimagining and reconstructing their own place in the printmaking world, while contemplating the ‘burden of representation and education’.

The DGI studio is typical of other printmaking sites; large and spacious with rollers, mesh, etching press, cleaning materials and ink….lots of ink. This is the base from which both Sheppard and Ngoyi hope to organically nurture ideas and concepts as their individual or collective work takes its form.

Ngoyi is a Johannesburg based artist and graduate of Artist Proof Studios in Johannesburg. Admired for both his printmaking and zine making — these have proved to be vessels through which he expresses himself and his ideas. Over the years, teaching has naturally become part of his practice through the many silk screen, monotype and zine making workshops he’s taught.

His passion for his craft, for knowledge creation and sharing of that knowledge reflects the lens through which he sees the world. ‘I’ve always expressed myself visually in one way or another’ he says. ‘Earlier in my career it was about perfecting different mediums and finding out what works with my style. Over the years its almost as if art is like an organ or a limb for me’.

Sheppard, an original member of the DGI collective, graduated with a BA in Fine Art from the University of Witwatersrand. Since then, he has contributed tremendously to the discourse in the printmaking industry; particularly probing questions around ownership of artists’ works.

Although he’s known mainly for his printmaking, he shared some collage work he’s recently been working on; ‘I’m attracted to things that others consider tacky’ he explains. ‘I like to go where others think its lowbrow and push the boundaries there’.

This interest in collaging doesn’t seem out of place; the works of Sheppard and his co-creators Chad Cordero and Sbongiseni Khulu – also members of DGI –despite emphasising concept over material concerns remain incredibly meticulous, detailed and intricate.

Witnessing Ngoyi and Sheppard at work and talking about their ideas validates some of my observations around their approach to collaboration; it is the lifeline from which the artists feed their conceptions and by which they continue to challenge, push and support each other:

Ngoyi: ‘Printmaking has always been a communal process for me; whether I am working with an assistant or sharing a space and resources with other artists. Working in this collective manner; helping each other with prints and sharing skills, feels quite natural’.

His and Sheppard’s individual and collective output is typified by strong concept and technical skill. Two years ago, Ngoyi and his Alphabet Zoo co-creator Isaac Zavale presented a series of works investigating conditions of consumerism, by collocating a black face to the non representational famous household brands bought into by the black middle class. That particular showcase took place at Constitution Hill in Johannesburg. This was the same show where artist Ayanda Mabulu depicted then President, Jacob Zuma in a sexual act with one of the Gupta brothers in a display dominated most of the media debate at the time.

The politically focused works of Alphabet Zoo not only deliver a commentary on social conditions, but also push the boundaries of the viewer’s comfort and are all part of Zavale and Ngoyi’s ways of working. This is in direct parallel with DGI’s manner of tackling the ‘restricted’ and the ‘taboo’….daring greatly and going where few other artists will go.

On the question of revealing their creative process, both artists are refreshingly open — true to their collaborative and active participation philosophy — though it’s a fine line between revelation and concealment in terms of the ‘how’ and ‘why’ of what they produce. ‘People have to realise that they can’t have access to the full story just because they want it’ states Sheppard.

The organic flow between Ngoyi and Sheppard at DGI is evident and the combined effect of constructive critique and a communal curriculum is powerful. The inspirational energy of the space actively lends itself to agency, kinship and the humility of education through teaching and being taught.

This interview by Nkgopoleng Moloi comes from a partnership between Let’s Be Brief and People’s Stories Project (PSP) — part of the British Council’s arts programme in sub-Saharan Africa. Click here for more info.