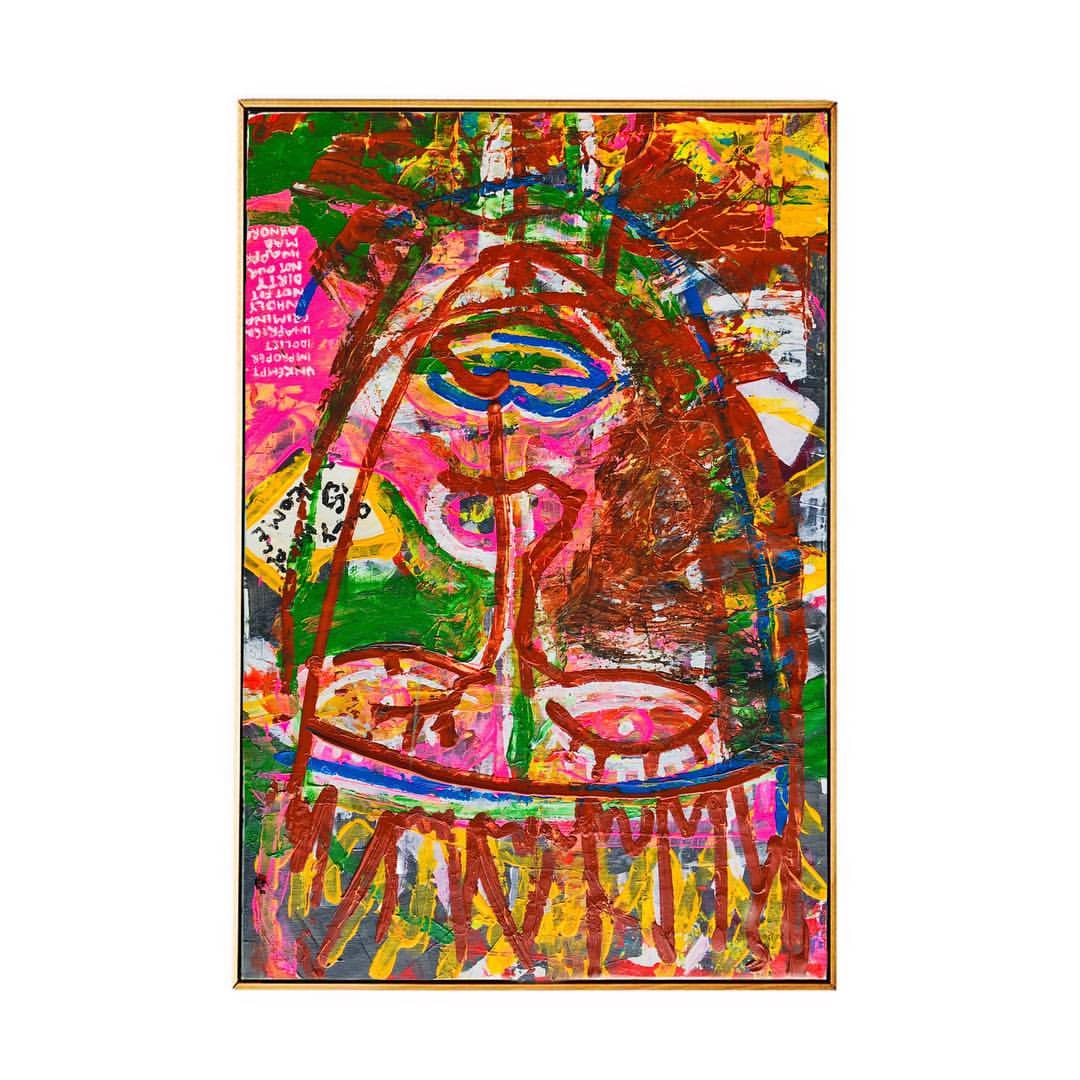 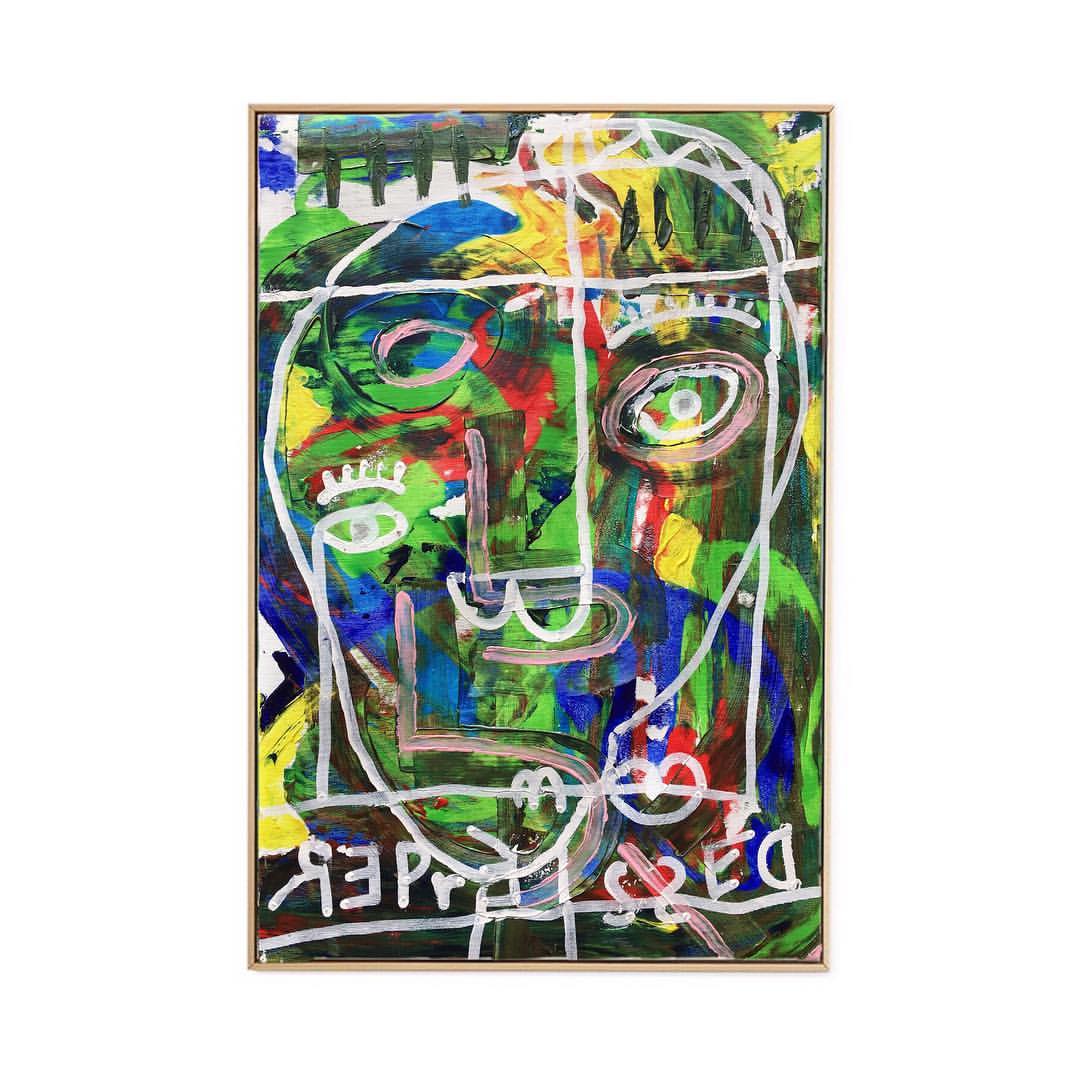 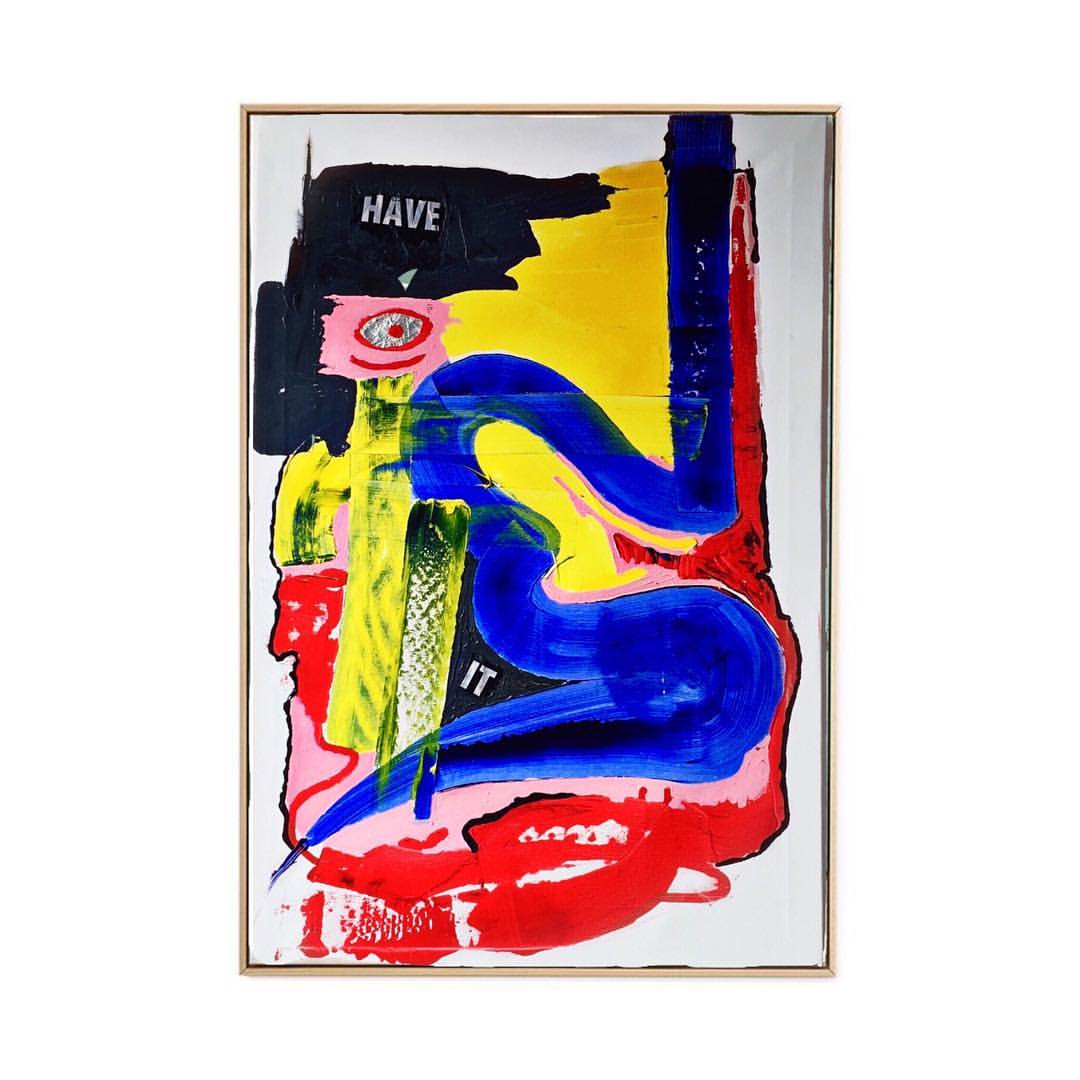 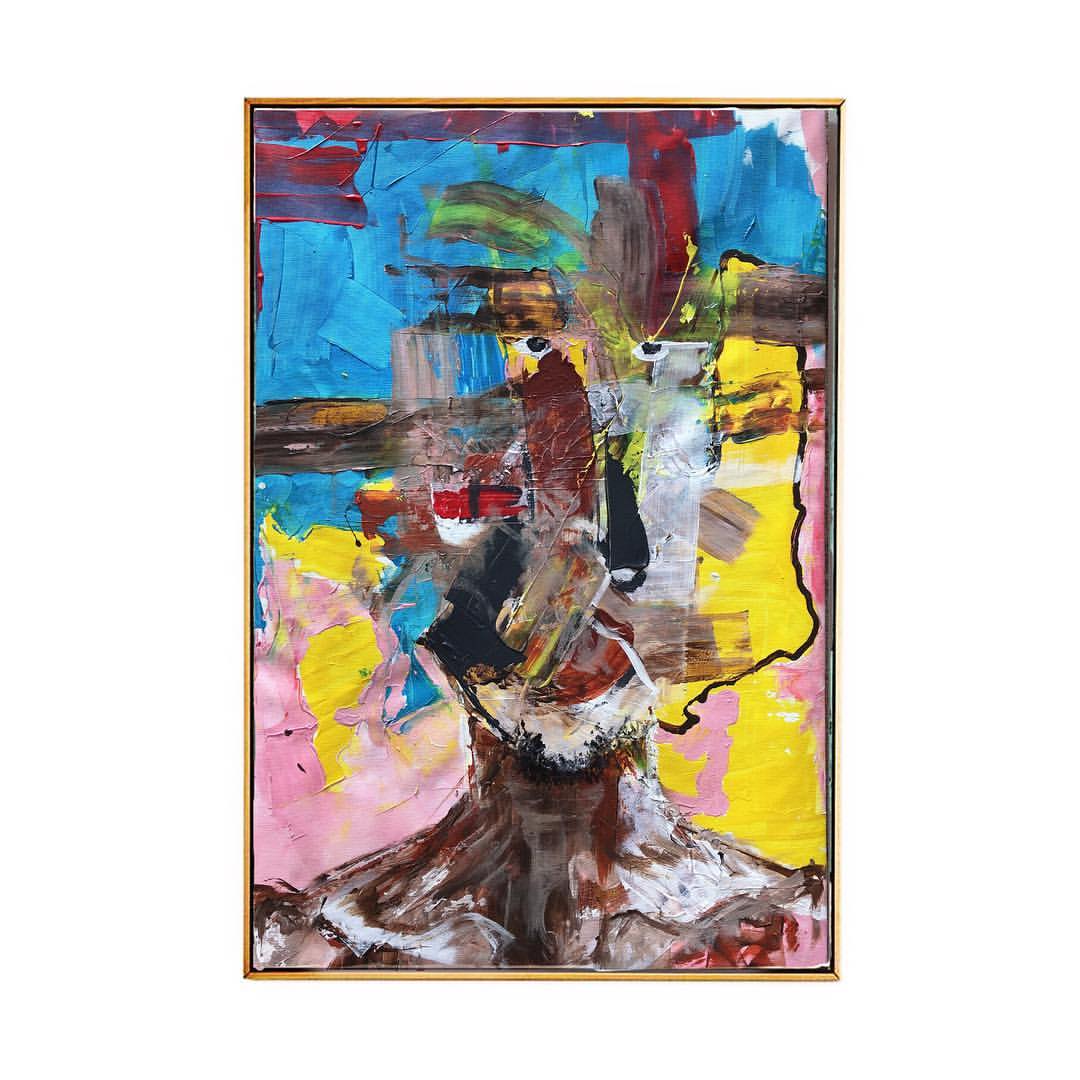 We had a very rich history with hairstyling in the past. Fast forward to contemporary Ghana, all of that has been erased and led to a situation where certain hair textures and styles are denigrated.

Twenty seventeen was a noteworthy year for Robert Selinam-Gbemu. Better known as multimedia artist Sel Kofiga, his forty nine units of painted facial expressions formed a body of work, Umbrage: Making Faces, which was one of the most outstanding to be exhibited at the Chale Wote Street Art Festival, two seasons ago. Shortlisted for the Art X Lagos prize, he also starred in the Me Sika Aduro music video by Ghanaian rapper, Akan; made a cameo appearance in Lucky – Abstrakte Films’ acclaimed millennial-focused Ghana cult classic; as well as starting work on his latest project, The COLORACTER Series.

On a warm Wednesday afternoon inside his home studio in Accra, we got into the heart of this still-ongoing series – which could be his most rigorous and elaborate venture so far.

Q) You’ve been working on the Coloracter project for about a year now. Can you tell us about it?

The word came out of colour and character – as in the Ghanaian cultural setting. This project primarily looks at two things: hair and sexuality. It was inspired by personal experiences, particularly from when I had locks. Beyond the personal, I also noticed that we had a very rich history with hairstyling in the past. Fast forward to contemporary Ghana, all of that has been erased and led to a situation where certain hair textures and styles are denigrated, so I want to explore the histories of hair and hairstyling in our culture. Regarding sexuality, I became very interested in that, and in homosexuality in particular, upon realising years ago that contrary to popular public perceptions, it is actually not alien to our cultures as Ghanaians, or Africans in general.

Q) Coloracter is a multimedia project that includes paintings. Could you tell us about these?

They are basically paintings of how people regarded me when I had locks, and how they mis-imaged me per their own prejudices.

Q) There are lots of colours in them…

I chose so many colours because people have their personal colour perspectives and definitions. Yellow for instance means healing to one person, but it could mean something totally different to another. So many colours also reflect the many differences and perspectives that are at the heart of this project.

Q) You’ve previously mentioned ‘character assimilation’ in your work. What do you mean by that?

Culturally, our identities have been kind of redefined, thanks majorly to colonialism. These new definitions of our identities have alienated us from ourselves in different ways. So I simply mean that there’s been some misappropriation in what is – and what is not – actually our culture.

Q) Do you regard this assimilation, in the context of Ghana or Africa, as a necessarily bad thing?

On a large scale, I would say that its impacts have been negative – because I think that generally people are continuing to think about these things in directions that are oppressive; though there are some positives to it. But what’s happened has happened and we need to continuously realise the harm that this encounter has had on us, and generate constructive public conversations.

Q)  Let’s talk about UNTITLED (Portrait Of i II) and Drowning On Feb. 3rd – the two films that you’ve released so far, as part of the Coloracter series. They’ve both been shot in monochrome. Is that deliberate?

Yes. I feel like monochrome gets people who’re so accustomed to colour to make efforts to try to ask questions about what colours could that have been used originally. It makes [them] more connected to the work.

During the making of my film, I’d had so many unsavory experiences with people. One of these included a heated argument with a landlady about my hair and Christianity.

Q) Drowning On Feb. 3rd, was particularly well received and widely shared. Can you explain the background to that film?

So, I’m a big fan of Tawiah and her music. I met her earlier in 2017 when she was in Ghana to premiere her new album, RECREATE. She shared a short music video in which she was cutting off her 13-year-old locks. I loved it so much; and I wanted to do something as powerful, but it definitely had to have a significant story behind it. Prior to, and during the making of my film, I’d had so many unsavory experiences with people. One of these included a heated argument with a landlady about my hair and Christianity. She would later evict me.

Q) The film also had a great deal to do with your dad’s passing, right?

Yes, my dad’s passing on February 3rd [last] year coincided interestingly with my desire to make [the film]. A few weeks to his burial, we – myself and my siblings plus our mother – were asked to cut off our hair. Initially, I refused; but as my choices became seemingly limited, I thought that I might as well use that as my cue to tell my stories. I spoke with digital artist Josephine Kuuire (who shot it) and we made this film about haircutting, how it intersects with mourning in Ghanaian culture, and also the constant battles I’ve had to fight because of my hair, and the emotional and psychological breakdowns that came with that.

Q) The fact that you work with mixed media reminds me of a remark you made in another interview. You said you have a responsibility, as a creative, to challenge yourself to critical evaluations on the struggles surrounding our livelihoods, and to document them through any medium necessary. Does this stance have more to do with you testing the limits of your creative abilities, or is it about a need to have your work reach as wide an audience as possible?

I’d say both. I love all these mediums of expression and I just like to try, and will continue trying, to employ them in expressing myself. But also, I want to project the work across, to so many different people, in their preferred medium of engagement – from photography to film to paintings and whatnot.

Q) What are the plans for Coloracter, moving forward?

I’m lining up a few presentations and screenings to generate conversations and more insights in these topics. And then I’ll go on to travel across some West African countries, speak to people, gather common histories about these things and ultimately make a documentary film of it. I hope to round it all up by the end of the second quarter of 2019, with an exhibition of all the works in the series. Hopefully, funding becomes a friend sooner.

This interview by Moshood comes from a partnership between Let’s Be Brief and People’s Stories Project (PSP) – part of the British Council’s arts programme in sub-Saharan Africa.