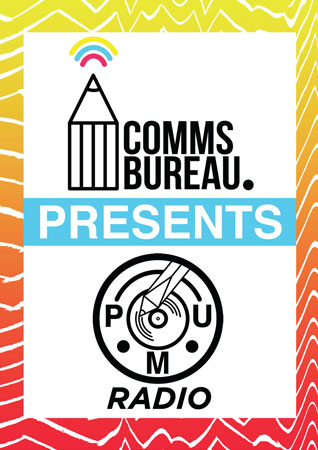 Music and design have a longstanding love affair. From album covers, art direction to fashion and the music video, the 20th century gave birth to the expectation of audio and the relevant accompanying visual. So much so, that the commercialisation of the ‘image’ now predicates our consumption of popular music culture.

On the flip side, music has also provided great inspiration to the designer, with many-a-designer moonlighting as musician slash DJ.

Inspired by his personal passion for music, designer Joe Rogers aka Colourbox initiated the Comms Bureau – a specially curated group of illustrators, visual artists and graphic designers who take part in a variety of audio and musical based projects that work alongside their own visual art practice. Members include Anthony Burrill, Victoria Topping, Emily Evans, and Supermundane.

Working alongside his multi-disciplinary collective, Joe aims to launch Pick Me Up Radio. The station will celebrate the connections between the contemporary graphic arts and music, broadcasting live out of Pick Me Up Contemporary Graphic Arts Festival every day for the duration of the festival (24th April – 5th May).

In order to bring the Comms Bureau audio visions to life the collective have launched a Kickstarter campaign to facilitate the project. We caught up with Joe to find out more.

Q) What inspired the Comms Bureau? And why is it important to you to champion such work?
Comms Bureau was born out of the idea when I applied to run a radio station at ‘Pick Me Up’ Contemporary Graphic Arts Festival. I thought it better to go under a sort of collective banner than something more disparate.

The idea to propose a radio station at ‘Pick Me Up’ came a few years back. I don’t live in London but was hearing through Twitter about the great live music that was going on at one of their late Thursday openings; I was thinking I wish this was being broadcast online so I could listen. The more I thought about it, the more scope I thought there was in the idea. I was going to apply last year but I was already selected to be part of the festival as part of Puck Collective. Being at the festival and realising that it was an idea that could actually work, spurred me on to apply this year, thankfully they loved the idea and selected it.

I have a passion for music but I am in no way special in this in the illustration/design/art field. The more you look the more practitioners there are out there who also have musical passions and take part in musical activities. I thought this was a good outlet to feature some of those people.

Q) At what point did you recognise the link between design and music in your own work/ creative process?
I have always been inspired by music. At college when I was making little animations the music was always very important to me and I even tried to make some of my own. Recently during my own practice and during my final MA project I tried to incorporate music more, creating artwork inspired by music and sound recordings and making my own soundscape compositions. I also create music mixes for fun as a hobby. My aim one day is continue with my MA explorations into sound and image and produce a physical album with a visual accompaniment. The work continues.

Q) The link between music and design was more prevalent in the age of cover artwork. Where do you think the relationship is going for the 21st Century?
Vinyl sales are back on the increase, so there are a few more opportunities for artists to work on that scale of cover. Unfortunately, I think the main issue is the budget, which is not there in a lot of cases to pay artists to make good album sleeve artwork, although there are examples that buck the trend. The more things become digitised, the more people start to crave the physical. I think that is why physical formats of music won’t die out, they will be niche but I don’t think they will die out.

I don’t know so much about mainstream music but I guess there is more scope in that realm to work on music campaigns across media, not just album sleeve work but website advertisements, music videos/promos, billboards etc.

Q) How did you go about selecting the artists for Comms Bureau? Were you familiar with their work previously?
I had a number of the people in mind before I created the proposal, people who I knew were interested and involved in music and who also create great artwork. Some of these people I already knew, others I knew of but had never met so it is exciting for me to work with some of these people. Once you start to mention a project like this to people, there were a lot of suggestions of potential artists.

The rest of the schedule really came through those recommendations. I’m really happy with the line-up of artists we have.

Q) What can people expect from Comms Bureau over the two weeks at Pick Me Up?
Lots of music and lots of different genres of music. I have basically given participants free reign over their music slots, what music they play, how they present them etc. So it will be interesting for me to see what people do!

There are also five curated days and some longer form events, in these I have given over certain days or parts or the schedule over to groups to curate their own content, to put on workshops, live music, zine/album sleeve launches, the lot.

There will also be a couple of days where we will incorporate talks on industry topics such as illustration and magazines or illustration in the food and drink industries. Oh and most days there will be a live act playing at the end of the day too so that should be fun!

Q) What’s on your current playlist?
Umm, well every week I publish a Top Ten Tunes mixtape which is generally representative of what I have been listening too that week.