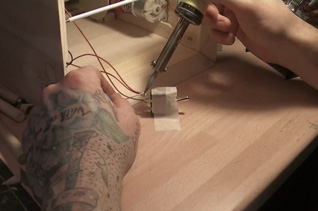 “The project started as the building of a miniature television / projector. An animation is printed on a roll of tracing paper and runs on two motors whilst being backlit, an experiment that I was unsure of its outcome. The story is one of love, and the machine illustrates my love for creating, experimenting and hard work.
After weeks of building and testing, a component inside broke with only days left before the deadline, the project now tells its own story of the struggle and frustration of a failing project.” — Daniel Williams
The machine didn’t work, but the machine didn’t have to. In truth it was probably never meant to, yet its production gave us some insight into a creative, inventive chap willing to burn himself with a soldering iron.
The ‘making of’ video kept the judges engaged for the duration. It was crudely edited with a lo-fi production value and a good dollop of charm. That Daniel entered the project for the D&AD award despite its failure to work, in many ways worked to his credit. The documentation of the journey made the right impression – and that impression made the difference.
::
Daniel Williams — Desperate Late Nights is an in-book nominee for the D&AD New Blood Awards 2014 // Make Your Mark — Tell Don’t Sell is a D&AD brief written in partnership with LBB // Judging Panel – Joel Gethin Lewis, Jack Renwick, Craig Oldham, Ansel Neckles