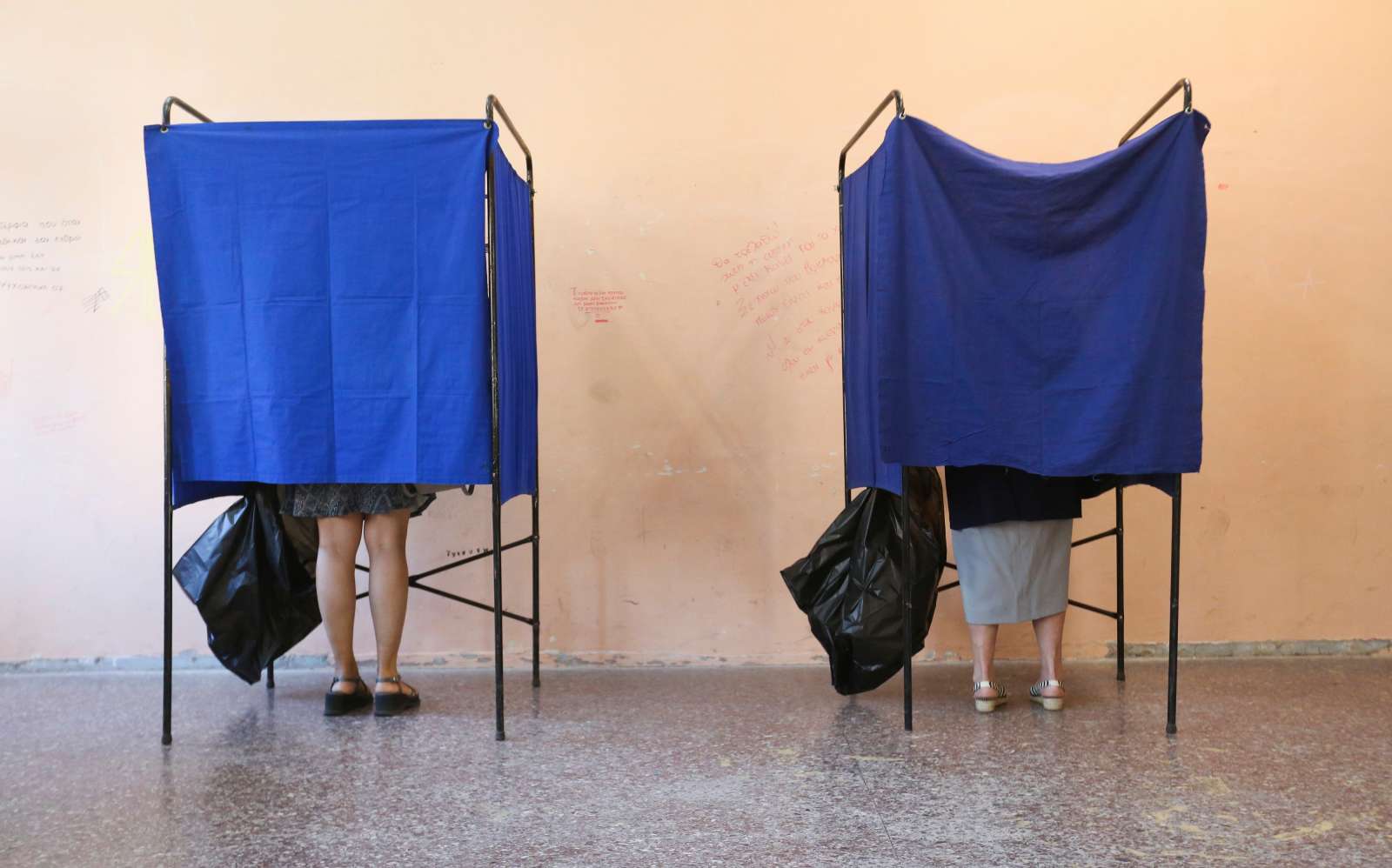 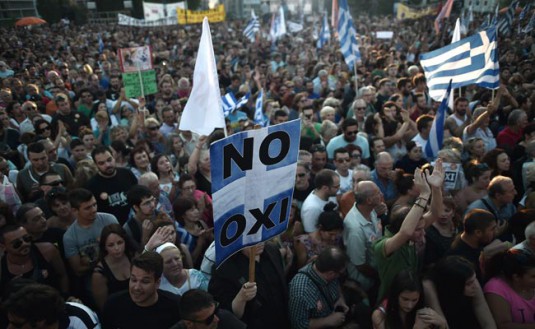 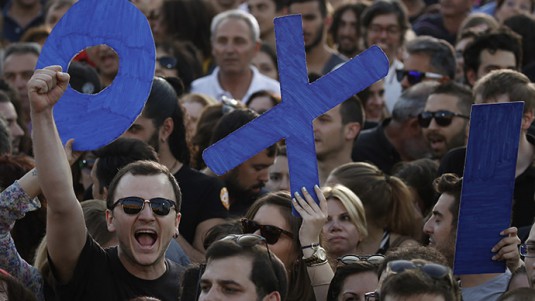 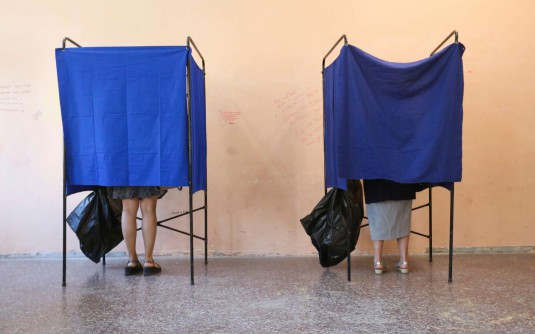 The Greek debt crisis has more than enough blame to go around. To list a few: the European Union, which allowed Greek entry into the Euro despite doubts over the veracity of the figures coming out of Greece or the abilities of the Greek government to back up their pledges; the Greek government itself; the credit ratings agencies and European auditing system (including the big four of Deloitte, PwC, E&Y, KPMG); the Greek Unions, who were happy to accept ever greater pay increases without meeting accompanying obligations to raise productivity; the economist models that had predicated the whole enterprise on GDP growth and cheap debt; and the banks who offered the easy credit and the members of the public who accepted.

With so many parties at fault in the matter, it has been easy for the array of participants to heap the blame on others while ignoring their own part in the crisis. With many of the issues so emotionally charged, solutions become technical and embroiled with ideology and conjecture.

Many issues combine to make the Greek debt crisis – one of the biggest being the usefulness of GDP or economic growth as a measure of improvement. What are the values that people wish to live by and how are they best achieved and defended when necessary? When is debt useful to a government and when is it not? To what extent are governments willing to trust populations to make rational choices? How do we allow for dissent?  And with the age of information, what responsibility do regular members of the public have to find out information for themselves?

Existential questions regarding the European Project need to be asked, like whether the goal of a European Union is a rational one, and whether the means used to achieve these goals are all productive. This crisis also highlights one of the major failings of politicians and human beings in general: that is the degree to which agreements set down on paper shape their perception of reality rather than how things are implemented in practice.

An example of this is the fanfare and congratulation with which the Euro was greeted, despite none of the controls designed to keep it stable after its implementation. Even now, there is a reluctance of European politicians and members of the European public – and amongst richer nations in particular – to accept that a stable currency union like the Euro requires regular permanent transfers of funds from the richer to poorer areas of the Eurozone, or that part of Germany’s export success has been as a result of the weaker exchange rate they enjoy due in part to their association with these other countries.

The European Union is both top-down and irrational in direction. Although supra-national organisations and attempts to find common values (mechanisms of law or organisation) seem to be a rational response to globalisation i.e. the spread and availability of information, ideas, finance, goods and travel across borders.

There is an apparent paradox between the methods under which the European Union operates, with the concept of Subsidiarity or decision-making devolved to the lowest possible level, and the vision to which it is committed, that of a European federal state- rooted in a belief that the project is the only way to prevent increasingly more destructive wars on the continent and that any who oppose them are themselves irrational and reactionary. This irrational self-assuredness has resulted in a pursuit of non-democratic and non-accountable means to achieve this end. A rational means of approaching the problem would be to debate the issues and argue through any opposition, presenting the different perspectives and weaknesses of the different approaches. Like what if the European public is uncomfortable or unready to embrace the prospect of a European State, for the next 10, 20 or 150 years… or ever.

In the case of Greece, the Euro was part of an attempt to bring about closer political, economic and social ties within the states of the European Union. This in itself is reasonable, but in order to achieve this aim, the creators of the Euro devised very lax rulebook and poor levels of scrutiny for Greece and other prospective Euro countries to first qualify and then remain in the Euro. The prospect of leaving was never acknowledged. All of this was in the face of the research from economists who attempted to create an impartial view that an agreement is only as good as its implementation and the seriousness with which it is overseen.

The first breaches of the Euro parameters were made, not by the countries of the so-called ‘periphery’, but by Germany and France. No one was held accountable and no penalties were imposed. So with the rules governing the currency already laid bare and paper thin, it was only natural that others would then use the rules to their advantage. The system incentivized the channeling of investment funds to countries like Greece, more risky investments with higher rates of return, but considered safe due to its membership of the Euro and the apparent access to backing (and oversight) of the European central bank.

This money was willingly spent (often on luxury goods from other EU exporting nations), and people felt materially richer, but the changes and investments needed to make the growth sustainable never materialised. Enquiries into charges of fraud and corruption by previous governments in Greece have gone nowhere, not to mention investigations into the possibility of corrupt practices by European businesses.

The European Union has been successful in many areas of trade, finance, tariff reduction and the adoption of European human rights. But the signing of political agreements and conduct of economic transactions is nothing compared to the difficulties of creating some kind of social bonding. When the money is flowing everything seems fine. But when the ‘chips are down’, that is when the stereotypes, the ‘us and them’ mentality begins to show.

This is human nature, and it can take centuries to dismantle. Socially, such solidarity is often the result of common effort in the wake of war or disaster. The efforts to force a marriage may mean breaking up a relationship that might otherwise have worked if given time to develop naturally.

After the banking and Euro crisis, the EU heads appeared to have woken up to the danger, taking seriously the proposals that, at least in the short term, would allow the Euro to work. It may seem like an obvious statement, but a currency and the mechanisms for managing it must make economic sense and be economically viable before it is able to create any political or social significance. The logic of

With the removal of subsidies for Greek islands, tax and pension reforms, proposals most recently tabled by the EU seem to do this. However the problem remains that the EU allowed this situation to deteriorate too far and for too long. Secure in their belief that the answer will always be “closer integration” and that the sacrifices needed to make the currency work — both within Greece in the short term, and within the wealthier nations of the EU in the long-term — may not be possible to get past their respective publics.

As for the Greek government and Greek institutions, there is a great lack of trust in both past and current economic practice. This means that investments necessary to get the Greek economy working – thus providing the necessities for people – are simply not there. At present, any forecasts for growth are merely optimistic estimates.

They desperately need evidence – whether in the form of small reforms and projects to improve the situation – that prove Greek government are capable of implementing agreements they make and get serious about rooting out the past officials involved in fraud and / or embezzlement.

The government agencies may need to accept that both their budgets pension terms are unsustainable. In order to maintain tax breaks for the Greek islands, sacrifices will need to be found elsewhere. This will have implications that affect the ability of some of the more remote areas of Greece to maintain their existing population — a problem experienced the world over.

The Eurozone will also likely have to deal with the fact that it is going to get the full amount back and basing their assessments on the most optimistic (some would say unrealistic) plans and projections, is a recipe for an ongoing crisis.

The question remains whether the Euro would be better off without Greece and whether Greece would be better off without the Euro. If Greece is to leave the Euro, then it must be in a more orderly long-term fashion and there must be a blueprint as to what it is moving towards. For the Greek government, now is the time for the serious consideration and modelling of what the future might hold.