The rise of the Google machine 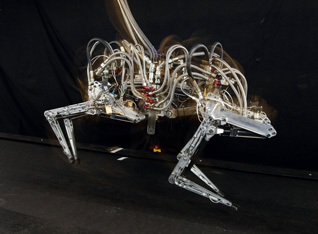 “Having exceeded even the crazy ambitious goals we dreamt of for Android – and with a really strong leadership team in place – Andy’s decided it’s time to hand over the reins and start a new chapter at Google.” — Google chief Larry Page

You’ve got that right Larry. Considering Andy Rubin, the now former Senior Vice President of Mobile and Digital Content originally joined Google in 2005 to head up the development of Android, his recent career trajectory shouldn’t come as too much of a surprise. Google’s most recent acquisition Boston Dynamics – makers of the world’s fastest running robot and other machines supplied to the US military – will be left in his trusted hands.

With BigDog, Cheetah, WildCat and Atlas now added to Google’s growing robot menagerie, it can only leave us to wonder what the future holds for this tech monolith. The New York Times suggest that the acquisition represents the clearest indication yet that Google is “intent on building a new class of autonomous systems that might do anything from warehouse work to package delivery and even elder care.” If by ‘elderly care’ they mean annihilating the elderly whilst on the meals-on-wheels run then they may have a point.

When in search of growth markets, all assets seem up for grabs. Google’s income from defence work had previously paled in comparison to Boston Dynamics over the last 13 years. A paltry $300,000 compared to BD, who have won contracts worth $140m (£86m) since 2000 from the US Department of Defense’s research unit (DoD), and its agencies (DARPA). The company boasts that it advises and assists the “US Army, Navy and Marine Corps” on developing “the most advanced robots on earth”, yet Google appear unsure as how to this technology will be used.

“The future is looking awesome!” said Mr Rubin via Twitter. ‘Don’t be evil’ so says the Google edict, whereas DARPAs line is ‘Creating and Preventing Strategic Surprise’. Words to live, or rather die by in all cases we fear.