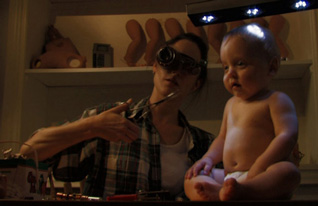 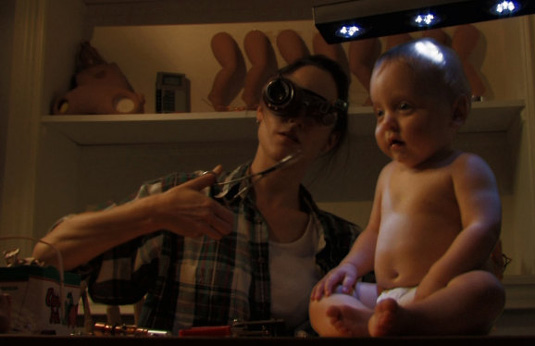 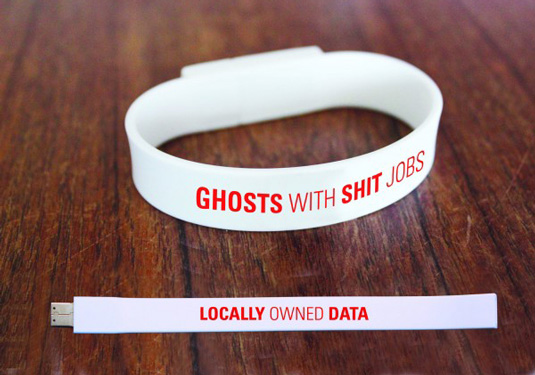 Ghosts With Shit Jobs is an interesting movie for a few reasons which is a good thing but I’ll get into that in a moment.

The film is set in a 2040 where Newsnight and Fox News’ (to name a few) nightmares have come true.

China is the leading economic power (current world ranking number 2) and cheap labour has moved to the West. In the 2040’s menial labour comes in the form of; Digital Janitors, Babymakers, Human Spammer and Silk gathers. A Chinese documentary maker decides to  investigate and give insight to the Chinese audience what life is like for ‘ghosts’ (Cantonese slang for white people) born into western slums aka Toronto.

The film is currently on Kick Starter until Friday 18th May raising finance for the screening tour.

Apart from the clever and thought provoking storyline, the film has been self financed with a mere $5000 and a lot of favours from the friends and family of the screenplay writer and director Jim Munroe.

This where the film caught my attention in particular, with regard to the production values and the teams ‘attention to detail’ to the branding and marketing of the GWSJ. The film’s website previews the trailers for each of the ‘ghosts’ stories but keeps the experience relevant to film. With subtle features such as the social media icons being in Chinese.

The Kickstart packages offer some of the following in return for your support;

$2: Personalized blurring of one of your photos by Oscar, the digital janitor, and a tweet from Serina, the human spammer

$10: A digital download of the movie, 720p HD & DRM-Free. Personalized blurring of one of your photos by Oscar, the digital janitor, and a tweet from Serina, the human spammer and for $35 you get the USB pictures above which is a back up for when the ‘clouds’ get repossessed (in 2025 digital clouds get repossessed and is equivalent to modern day reccession).

We were lucky to get Jim Munroe to share some of his insight into making the film.

Q) The premise of Ghosts with Shit Jobs is quite provocative – what inspired you to create such a narrative?
There’s a lot of talk about the economy and China in the news, an undercurrent of anxiety, but the flipped economy premise hadn’t been dealt with much in fiction. We work out a lot of stuff in our stories, so I thought it was an interesting place to bring it.

Q) Do you see this as vision of the near future for the western world? And out of all the scenarios – which do you think has the possibility of becoming the most likely?
Do I really believe that China will be the first world and North American become the third? I dunno! I’m not a futurist. I haven’t done a ton of economic research, but then again, it’s rare to find a person writing about zombie apocalypses who have done extensive research on disease vectors: that’s where the suspension of disbelief comes in.

My role is to tease out the undercurrents of fear and anxiety that exist in our culture to explore this possible future, to populate it with people rather than graphs, to give slang and specificity to it: partially to stimulate political discussion and partially for entertainment. Science fiction can be an inoculation against the future it’s predicting.

Q) With several directors how did you manage the collaborative process?
We each had our own “subject” we were following, so we were OK with each one having a different tone. We had one DOP through most of it so that helped make it fairly consistent.

Q) The film was produced with ‘no budget’, what would you recommend (top tips) to film makers who have a vision but no mula?
Work with what you have, not what you wish you had — if you have cool locations, actors, anything, write them into the movie. (Also get a good writer who can do this.)

Do something you’ve never seen in a movie before: it will make you distinct and also avoid comparisons to hollywood standards. At this point we’ve seen 10000 choreographed fight scenes, and if you don’t get it pitch perfect it sticks out like a sore thumb.

Q) What’s your definition of 21st Century Sci-Fi genre and what is its potential?
Weirder, riskier, and more subtle all at the same time.

Q) What’s next?
I’ll probably make a game next, though probably I’ll circle back around to film after that. I run a videogame culture org here in Toronto, www.handeyesociety.com, just made an ascii art text adventure game over the weekend with a collaborator.

Q) If you could recommend your top five sci-fi films to sci-fi virgins what would they be?
The third episode of Black Mirror is pretty much perfect. Love Misfits. I’m pretty keen on Manborg. District 9 was great. I also really enjoyed The Day.

One response to “Ghosts With Shit Jobs”