Spark for the Fire: How Youthful Thinking Unlocks Creativity 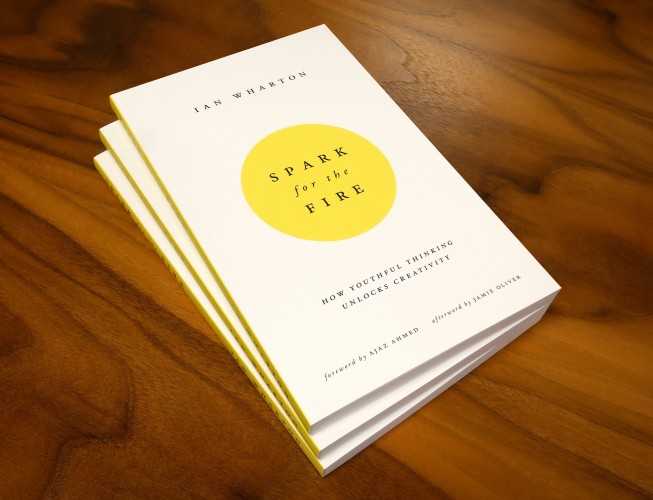 It’s cool to be cynical. You can’t change the world. Modern art is shite.  It doesn’t matter who you vote for. Whether it’s our jobs, our politics or even (let’s face it, especially) our relationships, too often the winner is the person who cares less.

While we can all appreciate that sarcasm and a touch of cynicism is part of the British charm, it has overrun our cultural attitude and ultimately our innate creativity. Let’s dare to get deep; the truth is, investing emotion into anything or anyone is scary but what’s scarier is not investing in anything at all.

Now, if you’re reading this you probably already know who Ian Wharton is. You’ve heard about his break out animated film Solar (2007), or if you’re a student yourself your work may have been subject to his D&AD juror skills. Maybe you’ve downloaded the app he designed for Jamie Oliver (along with 12 million others) or he’s mentored you at School of the Creative Arts. Wherever you’ve come across Ian and his work I think it’s safe to say you’ve been inspired and maybe even a little bit jealous of his upward trajectory as one of the design industry’s key players and creative director at AKQA. What you don’t know is that what Ian attributes to his success to is a childlike curiosity. In his first book, Spark for the Fire: How Youthful Thinking Unlocks Creativity, Wharton turns cool on its head and reminds us of what it was like before we could pronounce cynicism.

Cynicism is the opposing force of imagination. It kills curiosity, and ultimately creativity. Michael Wollf contributes to this point in Spark for the Fire by offering an anecdote: “Consider the miracle of an orange. An orange has an amazing colour. It also has an amazing texture. And you already know what’s in it: there’s its incredible structure, then its aroma, then its taste.
How many things do we create that give us such a dramatic sequence of sensual delight compared to picking up and eating an orange? Very few. And yet even then we let ourselves get bored by the process of opening an orange.”

Now, if you don’t appreciate the meaning of this message there is only one piece of advice for you; go buy Wharton’s book. Now. Because what Wollf says so eloquently goes beyond the appreciation of an orange and actually taps into what creativity means: curiosity is more valuable than ego, imagination sees beyond the societal constructs of what is deemed ordinary and the drive to create exceeds ridiculousness.

Spark for the Fire introduces the concept youthful thinking and delves into what it really means to not only be creative but to also sustain it. Wharton doesn’t only spark the fire he stokes it. The book is divided into six sections: Embrace the Ridiculous; Creativity is Transferable; Beware Invisibility; Curiosity and Purpose; Learn Forever and Play and Dare to Fail. Each section features stories, anecdotes and contributions from innovators like Nick Park, Michael Wolff, Lord David Puttnam, Jean Oelwang, Rory Sutherland, Ajaz Ahmed and Jamie Oliver among others.

Unlike self-help literature and inspirational coffee table books, Spark for the Fire provides honest, applicable and genuine stories (and ultimately, advice) that engages readers on a human level. What’s special about this book is that it’s about fulfilling an incessant and over powering need to create and success just happens to be a beautiful by-product. Ultimately, It does what all creative’s aim to do: remind you of what it’s like to be a kid again.