Intel :: Museum of Me 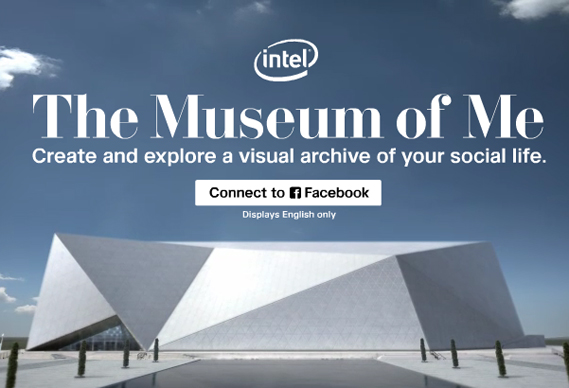 We have a generation of young folk who have acquired touch-typing skills any Executive PA would be proud of, through constant texting/BBing and social media updates. Then on the other hand – an older generation who book holidays and pay bills online, happily declaring themselves as silver surfers.

With the genuine revolution of communication via the Internet, it’s also managed to feed the deeply narcissistic tendencies of human nature (along with celebrity obsessed culture, but that’s whole another conversation). Roll on social media, a place where everyone can feel a little loved, or indeed hated and maybe make up for those years of not being the most popular kid in school with 600+ virtual friends.

To help people celebrate and look over those vast ‘social media’ memories, Intel have created an app that allows Facebook users to create their own virtual museum. Now I do not have a personal FB account so haven’t tried it out personally. But because of the wonder of social media, I didn’t have to, I just needed to look at the inevitable YouTube uploads.

As I expected it looks like a super swish, stylish piece of work, making everyone’s ‘social’ life look like it could be entered for the Turner Prize. The things is that it needs to be slicker than the average. Clearly shot with Eternal Sunshine of a Spotless Mind in mind, the Blue Sky thinkers who saw the opportunity to create an emotive connection with the device that ‘powers’ all this interaction – the Intel core i5 – what they’ve actually developed is a virtual stalker masquerading as gallery curator.

Our Sam in the office signed up, and felt a little disturbed by both how much he’d posted up online, and the things this Museum actually had access to. For many though, this app will achieve the desired effect, despite making us perhaps a bit more self-absorbed and a tad more virtually insular, as summarised by a quote on the Museum of Me YouTube page;

“This App is AWESOME. It’ll make you feel special and connected even if you think you’re not” – BiscuitXT 2 days ago