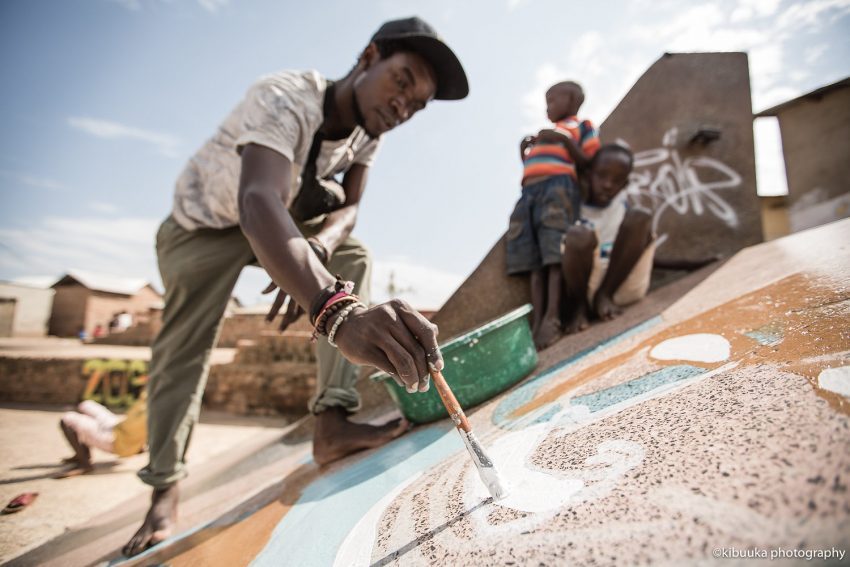 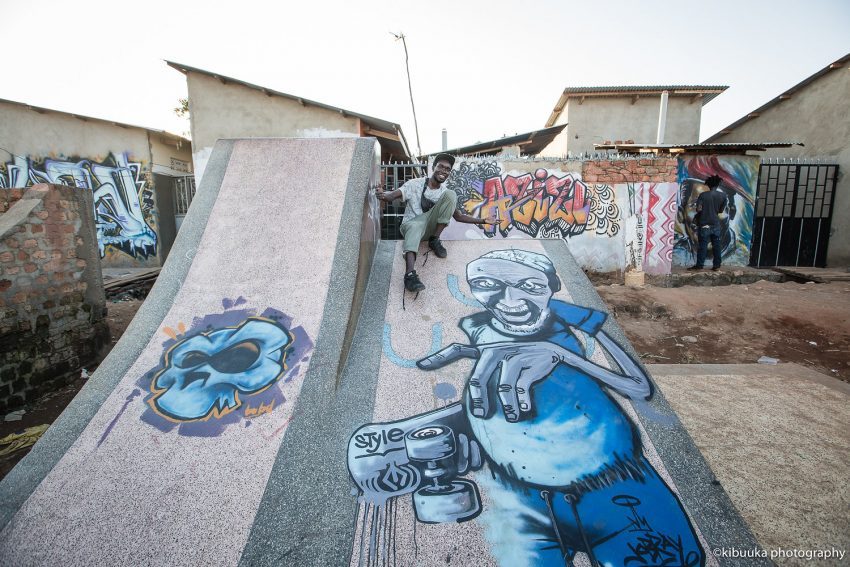 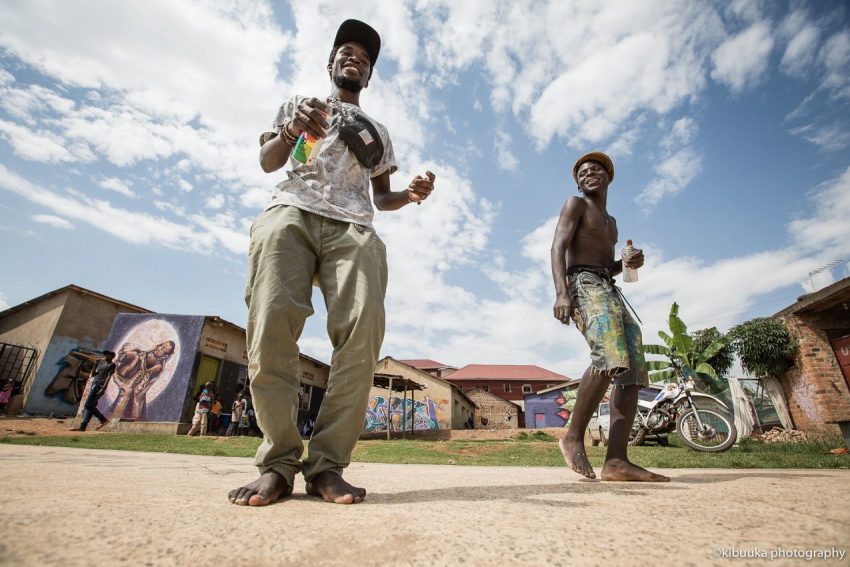 In the early 2000s, graffiti was a budding art form in Kampala. Back then it was synonymous with polymath artist Xenson, the most visible of the early graffiti artists who popularised the genre in Uganda. Today, tags and commissioned murals bloom on bare walls across the capital city, bearing the names of international and Ugandan street artists. One of these is Olego Job Alomet, alias Jobray. A prominent graffiti and mural artist, he’s as likely to be identified by his tag as by his distinct circular drawing style, which favours nature-inspired patterns and vibrant palettes. Last year he completed a residency at the Millerntor Gallery in Hamburg, Germany. In February this year, he held a graffiti exhibition in Belgium titled Urban Diversity, and a few months later he collaborated with East African street artists on a mural depicting the future of Africa at the Transform Africa Summit in Kigali, Rwanda. I caught up with him just after his return from that trip.

Q) How long have you been practicing graffiti?

I’d say 2008 was the time I started getting the interest and feeling passionate about doing it. That was around the time I joined Breakdance Project Uganda (BPU). Before doing graffiti, illustration was the main thing that I used to do – and drawing. I also happened to meet Oscar Kibuuka; he was a graffiti artist before he started photography. He’s someone who inspired me and introduced me to the art form.

Q) What are some of the coolest spaces you’ve ever created in?

Some of my work no longer exists because the city council broke down a lot of structures and ghettos for development. There was the former Nsambya railway area. It used to have one of my best pieces. There was one I did with [Canadian artist] Monk-E in Kabalagala. They painted it over. It was on the theme of hope for the ghetto kids. Up to now, what makes me also feel proud is the work that I did at Design Hub Kampala. It was not like graffiti but still the same style; the continuous spirals. Sometimes to me this depicts persistence and passion in what I do. It’s like I have no boundaries.

Q) Did you ever tag illegal spaces? How did that feel?

Negative. Before even holding a can, I used Montana markers. I used to tag around, but not everywhere. I would start with my neighbourhood in Nsambya Central. As I went on, I started using spray cans. One day this guy found me tagging. He knew where I was from, so it turned into a really bad situation between me, him, and my parents who had to buy a jerry can of paint to cover over the building. The feeling I have now compared to tagging then? It was done more out of desperation to do something. It was the first time I was introduced to such an art form. I was eager to make it work and try to find space where I could demonstrate my style and engage the thoughts of followers.

Q) Which graffiti artists inspire you the most in Kampala?

I’m proud of Sparrow. I think he has a lot of energy. I still also recognize Xenson, being one of the first people to do graffiti in Kampala. He’s well known because he opened a way for the rest of us. And then Oscar Kibuuka. He’s a great graffiti artist besides what he’s doing now – photography. Then there is Mos Opten. I think that’s all for now. And maybe Jobray…

Q) What about graffiti artists and muralists outside Uganda?

One of them is definitely Monk-E from Canada. I look up to him so much. I met him in maybe mid 2014. Then there’s Bankslave from Kenya. Swift Graffiti is also from Kenya and then I have my brothers from Tanzania. They’re a collective who call themselves the Wachata Crew. There’s Wise2 who’s also from Kenya. Yeah, and a few artists that I also met from Germany, like Bobby Serrano, and also Oibel from Switzerland.

Q) How did you find working in Germany?

When I was there the first time, what struck me was the artist community that I saw. It was more inspiring and more open minded…Graffiti itself is an art form there. If someone makes a piece on the wall, in those communities, no one is going to write over it. They respect the work. Even learning … they do classes about graffiti. They care about the art form itself. They give it time; they are organised, they do a lot more to push the art than themselves.

I’m working on my projects based on merchandise. There’s something I’m working on with a friend. Maybe you know about it; Wowee. Also some Nyege Nyege festival designs. These are some of the things I work on in my free time. And then my sketches for another project are already done.

Q) What is the strangest thing you do in your process of creating?

I don’t know whether it’s strange. Sometimes before, I drink wine. Just me alone. The thing I also realise is I find images projecting in my head when I think of something to draw. I sketch certain things, illusions or fantasy. I create what doesn’t exist and I want to make it alive so it feels like it does.

Q) What music do you listen to while working?

Q) Which life experience has shaped you most as an artist?

I would go back to me choosing to be an artist, which was quite hard at first. My father is an artist himself, my mom is an artist and I kind of feel like neither of them got the chance or the time to do that. My father was not happy with me doing art, based on his thoughts about scholastic experience or career flow. He had his own perspective on that, being the one paying the school fees. But I’m happy with who I am and I’m happy my dad also now understands. We are on the same page and can sit and talk. Sometimes I even ask him, ‘what do you think about this?’ and this was not there before.

This interview by Gloria Kiconco comes from a partnership between Let’s Be Brief and People’s Stories Project (PSP) — part of the British Council’s arts programme in sub-Saharan Africa. Click here for more info.