Julian Assange :: Standing in the slender shadow of liberty 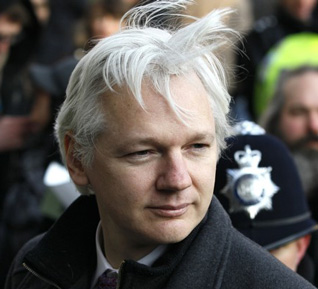 Last week the UK supreme court finally ruled that WikiLeaks founder Julian Assange must be extradited to Sweden under a European arrest warrant for alleged crimes he hasn’t even come to close to being charged for.

With Assange currently holed up inside the Ecuardorian Embassy in London like he were Billy the Kid, we thought it would be a good time to draw attention to our friends at The DOCFACTORY and makers of Shadows of Liberty – a documentary investigating the disintegrating freedoms in the U.S media.

More on Shadows soon. In the meantime, here’s a panel discussion featuring Assange outlining those perceived freedoms right here in the UK. Ignore the pantomime mask and pay real attention to the pantomime playing itself out via a mainstream media outlet near you.

Shadows of Liberty will be previewing at Open City Docs Fest on Saturday 23rd June at 2pm go here for tickets and information.