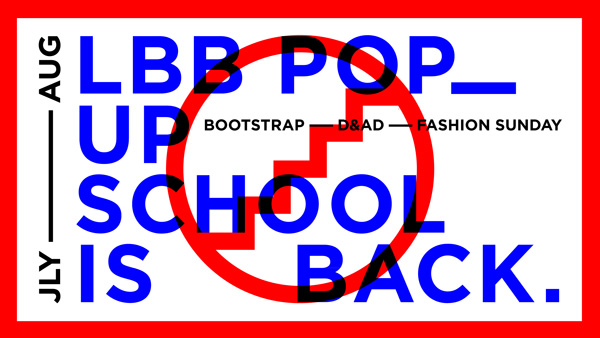 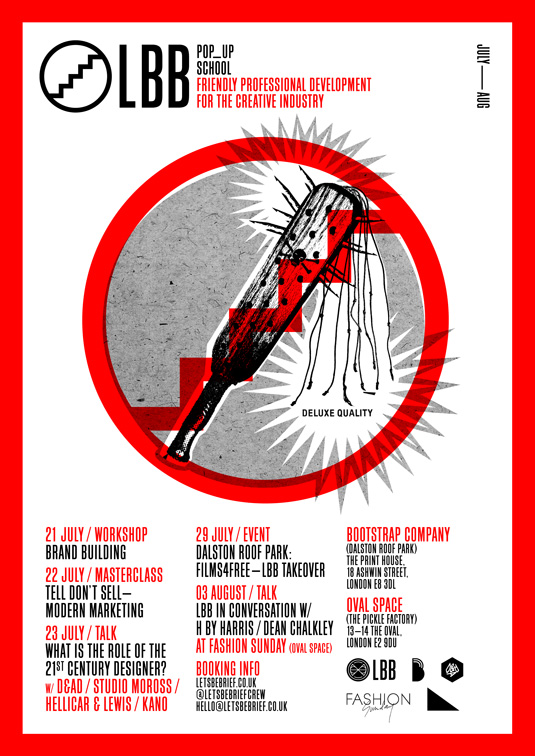 Let’s Be Brief Pop-Up School returns to Hackney this July. Alongside partners Bootstrap Company, D&AD and Dalston Roof Park and Fashion Sunday, we will be hosting a range of scintillating talks and discussions that cast an eye on design, its role in the 21st century and the burgeoning cross-disciplinary love affair within the creative industry.

The curated programme will also look at Brand Building and the story of Modern Marketing with the Tell Don’t Sell masterclass.

So just what have we cooked up for you this summer? Take a peep to sample what you can expect to wrap your intellectual nugget around.

WHAT IS THE ROLE OF THE 21ST CENTURY DESIGNER?
From the Internet to 3D printing, the digital world has enabled the discipline of design to permeate culture in a multitude of ways; such as the world’s first 3D printed gun and continued disruption of the music industry.

In What is the role of the 21st century designer?, the LBB Pop-Up School panel discussion will be examining the possibilities of design in a digital world, and asking how can designers help shape the new technological world we live in. Speakers include art / tech / design outfit Hellicar & Lewis, multi-disciplinary design agency Studio Moross, Kickstarter’s most successful campaigners ever, Kano and D&AD.

LBB POP-UP SCHOOL AT FASHION SUNDAY: LBB IN CONVERSATION WITH HARRIS ELLIOTT & DEAN CHALKLEY
If you were to prise apart the heart of many cultural zeitgeist, you’d most likely find design, music and fashion as integral components. There’s not always a logical and linear reason for why trends appear, but it is why culture remains such an interesting phenomena.

In collaboration with Fashion Sunday, LBB will host a live interview with ‘fashion-industry favourite’, creative director / H by Harris founder Harris Elliott and prolific photographer / filmmaker for ‘music’s most wanted photographer’ Dean Chalkley — both cultural instigators in their own right.

The topic of conversation will be the pair’s recent visual arts collaboration: The Return of the Rudeboy, currently exhibiting at Somerset House. The multimedia exhibition featuring photography, installation and events, showcases the sartorial subculture of the 21st century Rudeboy as well as the contributing culture that underpins the movement. From its roots of 50’s Kingston, Jamaica, 80’s Two-tone Britain to the contemporary take on Rudie style.

We’ll be showcasing a series of shorts and music videos from established / emerging directors that play at the intersection of music and film.

The night promises to be a bit special as it will also feature the debut screening of LBB / twenty%extra™ produced short film Love She Wants. Based on (and featuring) an original screenplay by The Insomniax and directed by Johny Mourgue, the Channel 4 / Random Acts commission will be screened for the first time as a full 15 minute short.

Music on the night will be supplied by The Insomniax and The Poetic Soundsystem™, with food by Stokie’s finest roti maker – Roti Stop.

We are open for submissions for ‘Films4Free’. If you have work that fits the brief, send us a link.