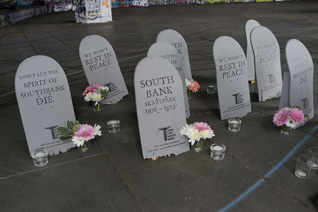 London’s residential and public space is changing faster than Clark Kent into his Superman pants. With ever more developed properties in London being sold to overseas buyers, the limited square footage in the capital is of a premium. This precedence has extended to the general attitude towards ‘space’ and its value in all senses of the word.

Cue the Southbank: a cultural des res of sorts, anchored by cultural institutions such as the Royal Festival Hall, BFI, NFT and the Hayward. it is an ideal location for tourists; and where there is tourism in London, the seemingly inevitable hard-nose of commercialism duly follows.

In March 2013, The Southbank Centre revealed their plans for a £120 million redevelopment of its Festival Wing which is to incorporate commercial space for retail. However the redevelopment and extension overlooked the literal dismantling of the 40 year strong skate community at the Undercroft – a space where skateboarders have congregated for decades. Unbeknownst to the Southbank Centre, the Skate community was not prepared to roll over and die.

Instead the Undercroft devotees galvanised and created their own campaign – Long Live Southbank (LLSB) – to save the designated area.

LBB asks LLSB spokesman and activist Henry Edwards-Wood, how and what it is like to take on the big boys.

Q) Who are the LLSB core team and how did you go about organising yourselves in the first instance?
LLSB was set up as a reaction to a lack of engagement with the Undercroft community by the Southbank Centre.

The organisation didn’t really come into it in the beginning, we had to move swiftly in reaction to the Southbank Centre’s relocation agenda and all the local skaters put the hours in. Now the campaign is in its seventh month and we have a small close-knit crew working on it full time and a rota of volunteers from the skate community and beyond who do the info tables and canvassing.

We were lucky that so many people from various organisations and backgrounds came forward to help or give guidance and advice; particularly UpRise which is an anti-racism festival and movement and social mediation organisation. We couldn’t have come this far without their input and experience.

Q) Why is the preservation of the skate culture at the Undercroft so important to the Southbank area and to the wider community?
The Undercroft is the oldest surviving skateboard spot in the world. It is the birthplace of British skateboarding and remains the central pillar of the London scene. The skate community is the last true bastion of the people left in that area, loosing Southbank would be the beginning of the end.

Street skateboarding is about doing it yourself, interpreting space using your mind and body and using the skateboard as our vessel to do that.

What’s most important about the skate scene is that it is a linear community. Everyone is equal and everything begins with respect. Skatepark scenes are very different, they remove the expression and freedom of skating and it becomes bout repetition, competition. It is aspirational not inspirational – by that I mean that for kids skating the Undercroft, they are living the dream and are inspired to continue doing it; skateparks are aspirational in that kids aspire to be the best, to “make it,” to transcend.

Street skating is about doing it for the love and sharing your ideas and experiences for the greater good. Street skating is a shared belief that the world can be used and lived in differently, but if we have nowhere to pass down our culture and empower future generations, street skating will vanish and, much like Hip Hop, will eventually become a commercial pastiche of a once pure culture, designed to maximize profit and further this shallow celebrity-led consumer climate we live in, to which skateboarding is currently a counter balance.

Q) As a collective you have taken on ‘institutions’ and corporations. How have you found the process and what have been your key challenges to date?
With this campaign everyday is a challenge and the further we delve into the inner workings of society and democracy, the greater the struggle.

The last 6 months have been a journey into a world that as a skateboarder I have never really had to deal with. Skating is an alternative lifestyle that had enabled us to exist almost in spite of a broken society – until now.

The biggest challenge by far has been keeping up with the Southbank Centre’s political maneuvers and PR onslaught. They have financial backing, a large workforce and a board of governors well connected with this country’s elite. They can get a misinformation story in a newspaper very easily, whereas to this day I don’t feel that we have ever been able to get our full side of the story across in the mainstream media.

The fact that skateboarding (well the image of it) is apparently cool right now has been more of a hindrance than a help because newspapers and media see us some kind of mascot for being down with the kids but no one wants to print anything of substance or really unpeel the layers of the Southbank Centre’s propaganda and tactics.

Q) And wins?
We handed in a record number of objections the Festival Wing application to Lambeth council in June, which resulted in the application being paused. That was a big victory at the time.

The Undercroft has been legally listed as a Community Asset and LLSB have recently received full support from the London Assembly planning committee after I spoke at a meeting at City Hall.

We currently have over 70,000 members of our organization and the campaign has received worldwide coverage and support. There’s a long way to go but for a bunch of “angry skaters,” as the SBC have labeled us, I don’t think we have done too badly.

Q) Were you politically / socially active before embarking on the LLSB? And what have you learnt from taking action?
Street skating itself is a form of political activism. It’s about challenging the status quo by choosing not to subscribe to what someone tells you to do – but in a positive creative and social way. So using a wall or the outside of a building, or a bench or bike rack as a canvas for your expression is basically saying “I don’t accept the confines of society, I don’t want or need facilities, I get everything I need to be a healthy human by skating for free”.

For most doing it, it’s such a pure natural thing that they would never see it as being politically active, it is just what we do. However, I have been more and more interested in politics in the last few years mainly from seeing London be transformed slowly into a homogenized capitalist development haven. My generation are paying for the lavish credit culture of the past few decades and Southbank to me is a great way to get young people to open their eyes and hopefully become more politically active to change things for the better.

Q) LLSB have applied for Village Green status under the Commons Act 2006 but the application has been refused by Lambeth Council. Do you think your application has been discriminated against because it doesn’t fit in with outdated idea of communal space? And what do you think you can do to challenge this narrative?
The application was deemed to be invalid on a technicality; this issue is not resolved and is with our legal representative. All I will say is that, the world is urbanizing, and culture and pastimes are evolving to fit this transformation.

Skateboarding is one of the most prolific new movements in terms of its rise in popularity and I think that setting a precedent with somewhere like Southbank would be a real game changer. We are not relying on this though, it is more of a backup, we are confident the UK’s leading art’s institution will see the error of their ways eventually.

Q) Gentrification is becoming a critical issue for London with a saturation of commercial space being valued over cultural space. Do you think that there’s still opportunities for genuine culture to develop in a ‘space’ in London as the Undercroft did?
I think those opportunities are depleting rapidly. True public space is a myth, everything is owned by someone and anyone using that space for something other than sitting, talking and consuming is likely to be ejected.

Skateboarding is important because we are just members of the public like anyone else, we just choose to use public space how we see fit, reconfiguring our city to work for us whilst respecting everyone else in the places and spaces. That surely is what being a true urban citizen is about; wanting to make your city what you want it to be.

Unfortunately, the increase of overseas investment, terrorism paranoia and the “Big Brother” state means that these grass roots movements are more likely to be weeded out where they are not conducive to capitalism – which right now appears to be everywhere.

Q) We’re in a new a culture of social activism that has been enabled by the internet. Do you think there has been a change in people’s perception of the change they can affect? And if so what do you think has influenced this?
We are in a really interesting time in human development right now. The internet has changed everything and whereas those who fall through the cracks of the formal education system used to be lost to a life of disparity, now they can educate themselves, connect with like-minded people and start to understand, challenge and affect this broken society we live in.

The LLSB campaign could not have got to where it is today without the internet and social media. I believe a global cultural revolution is bubbling under and think that saving Southbank will empower the underclass generation and really start to get the ball rolling.

Q) How can people support and get involved in the LLSB campaign?
The usual outlets, online at llsb.com or find us on facebook.com/longlivesouthbank or twitter @Long_Live_SB

The best thing you can do is spread the word, get conversations happening. Go and visit Southbank or watch our videos and take a look at the skateboard culture of expression at the undercroft, the people who use it, how they interact. That is what we are trying to save, that is what everyone should relate to.

This is about cultural hierarchy, the social elite and the wider gentrification of the South Bank area and of London as a whole. In Southbank we have the perfect vessel to get young people politically active and to show the world that London is not ready to lose its cultural identity for the sake of consumerism and commercialism.