Mark Hughes, Lewis Hamilton and a load of tweets 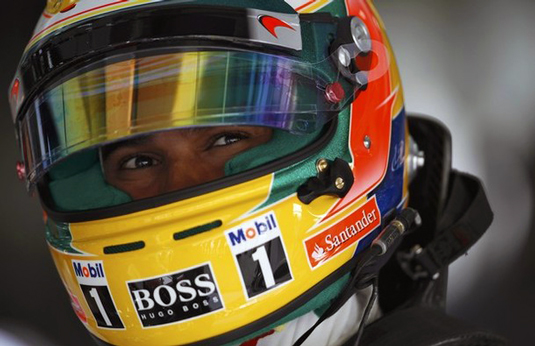 There’s a lot that’s said behind closed doors. Take Mitt Romney for example. When the Presidential candidate spoke of the 47% of American foodstamp dependent ‘victims’, he spoke freely in the apparent comfort of a Republican fundraising event.

The Formula 1 paddock may not reflect politics in the traditional sense, but like the House of Lords, operates on a platform of privilege, power and a certain disconnect with the ‘real world’.

Closed shops really don’t like people breaking the door down; especially when they’ve come with intentions of becoming the landlord. Six years ago Lewis Hamilton arrived with that very intention — that is, an unstinting desire to win. And that was fine for a while, until that desire threatened to permanently upset the apple cart. In the overtly classist bastion of elite motor sport, Hamilton sees himself as having no inherent right to win, but sees winning as the only matter of course. He also tweets every now again, with a stream featuring a smidgen of colloquial shorthand and shout-outs to his friends.

None of which has gone down to well amongst a fraternity with traditions of received pronunciation, nepotism and drivers moving over for their teammates.

The twitter issue has provided inspiration for Autosport’s Grand Prix Editor Mark Hughes in his September 13 Pit & Paddock Comment piece. A somewhat creative work of fiction, Hughes fabricates a ‘conversation’ between Lewis Hamilton and his 2013 boss at Mercedes.

The article you’re about to read isn’t about literal closed doors – as in the Romney case – but more metaphoric. In fact the doors couldn’t have been more wide open than in Autosport – a motorsport magazine published by Haymarket Media Group, with a weekly English circulation of 50,000 copies.

This is not Ali G in in a racing car, but a columnist with a vivid imagination, too much time on his hands and an audience of familiar friends. Listen closely; you might learn something:

IF LEWIS HAMILTON REALLY DID TALK AS HE TWEETS, AND IF HE REALLY DOES JOIN MERCEDES, WHAT WOULD HE MAKE OF THE CURRENT CAR? TIME TO LISTEN IN ON SOME STREET TALK FROM DEEPEST STEVENAGE.

So, at Valencia in February 2013, Lewis Hamilton tries this year’s Formula 1 Mercedes for the first time, with Ross Brawn in eager attendance, keen to know what the world’s fastest driver makes of the car that Nico Rosberg and Michael Schumacher have struggled with in 2012. After an installation lap, Lewis is straight back out there for a flat-out 15-lap stint. He trails back, cuts the engine, and the whole team is listening in as Ross Brawn begins to download him.

There’s a pause, then Lewis begins his appraisal.

“I ain’t givin’ you no shit, yo low speed grip be a big hit. But I gotta, let ya know that yo aero is low and yo tyre deg be neg.”

“I’m not altogether sure what you’re talking about Lewis. Are you saying you believe the F1 W03 is deficient in high-speed aero?”

“Yo, the man Ross, he ain’t stu-pid, the knowledge and him they be cu-pid. He kno how I speak as the info does leak, it just needs him to see how I is freak-ed.”

“Well, that’s quite an interesting observation for your first run, Lewis. I know that Nico said all along he thinks the car is mechanically very good. But he’s felt that its high-speed aero is inconsistent.”

“You know my man Nico he’s my good friend. Our harmony will last past the week-end. I ain’t sayin’ he a fool, but talking all that shit, he aint usin’ the tool. He just got to learn how to de-fend.”

“I see. So you believe that with this car you would have been able to take advantage of the new-tyre grip to get grid position and then defend and retain position as the grip deteriorated?”

So you think you will be able to maintain more momentum in the high-speed oversteer corners?” Because from what I’ve seen from Nico and Michael we very evenly developed in that department, as if they were both able to easily access what was there. It was in the low-speed speed corners where Nico was finding the edge. I was thinking if we could give them a car that had much more aero grip, it would be more interesting to see where the limits of each were then, and whether Michael could actually have an edge there.”

“Yo kno Ross that I like you – aye? But I find that Mike he’s a slow guy. He ain’t rapidly trippin’ the songs he was drippin’ – way back in the day when he hi-fly.”

“Well there could be something in that, Lewis. But could we be more specific?”

“I think this Merc need the big wheels, all chrome and fat be the real deal. Yo get more rear-end grip and we’re not looking so slick and I’ll drive like a mofo and we’ll get real.”

“But we’re limited by regulation on the wheel widths, Lewis.”

“I say we take our legal muscles to Brussels, campaign for us human rights. Have them legal vultures say we got grounds that be culture.”

“Well, we could try that Lewis. But in the meantime I think we’ll make up time on the McLaren’s with our pitstops.”

“Yeah, ain’t that the truth, the McLaren stops they go hipp-idy-hopp-idy-hibbidy.”

“Well yes, they seem to have had a few problems. Could I ask what you thought about our double DRS?”

“You doublin’ the troublin’ man. You switch that flow off the front wing – the drag is tres bon, but grip won’t switch on. Yo get in the turn, the front tyre do burn, then grip-up and won’t let you re-turn.” 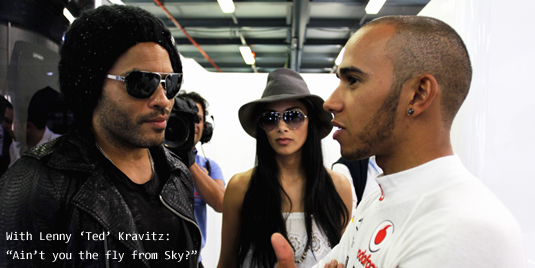 7 responses to “Mark Hughes, Lewis Hamilton and a load of tweets”