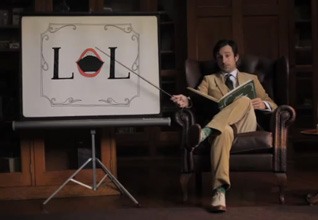 The task of making an insurance brand a sexy proposition is an uphill one. Same goes for most brands in truth, but who wants to deal with car insurance.

VCCP did. And together with film production outfit Verso Films they took to the challenge of presenting mundane but necessary details through the vehicle of More Than Freeman. Morgan, More Than. You can see how they got there.

A voice with the warmth and authority of Morgan Freeman doesn’t come around very often. It also comes with a heavy price tag. But who needs Morgan when you’ve got cult impressionist and comedian Josh Robert Thompson to fill the breach. All the while I thought the character in the ads was a face designed to throw me – turns out it’s actually Thompson himself working to deliberately poor lip sync.

More Than Freeman’s Guide To Text Speak is viral juggernaught. The viewing numbers don’t quite stack up into the millions, but when you can get 66 thousand plus YouTube views for an insurance brand, that my friend is the marketing equivalent of a home run. So good in fact, that I can almost forgive VCCP for those pesky Meerkats. Almost.