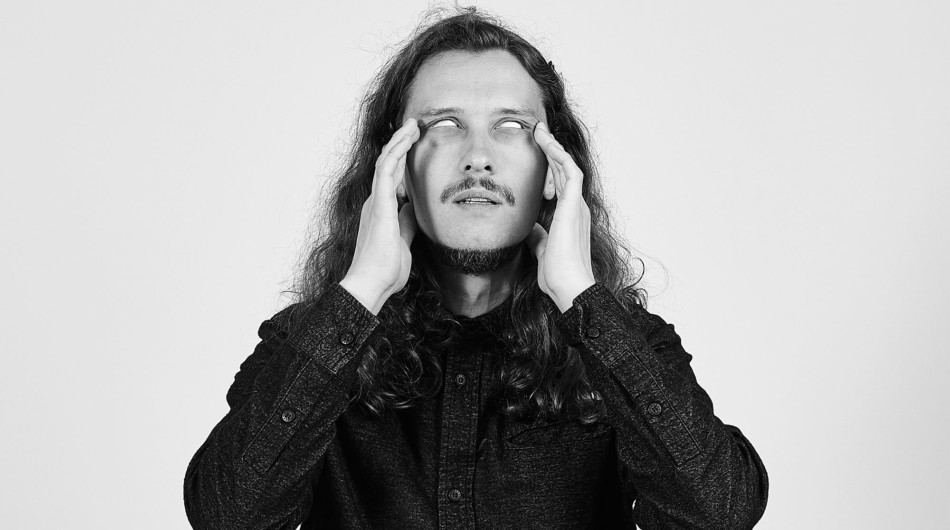 Technology can be very much in balance with nature, since it is mostly just trying to imitate or trying to understand something from within nature. I hope we as humanity will be able to somehow establish a more balanced way of taking and giving, and be more respectful with nature.

Flako; Dirg Gerner; Natureboy Flako: Dario Rojo Guerra’s style has evolved with his aliases. The Flako moniker focusing on a softer, slower style of instrumental hip hop, with Dirg Gerner releases lending additional vocals to the Flako sound. Now known as Natureboy Flako, the self titled EP explores a darker side of electronica.

Hailing from Chile and now residing in Berlin, we caught up with Dario ahead of his Jazz Cafe London gig to discuss everything from his latest project with Kutmah, through to his ideologies on the technological and natural world.

Q) Congrats on your new self-titled EP. How do you tally your own self expression with caring about what people think of your music?

Making music is a personal need first. But when I decide to release some of it, I of course do care about what people think. I’ve been blessed with a lot of support from friends and strangers alike and think that the feedback I’m getting is probably what keeps me being interested in releasing tunes. Music has helped me in many different situations in life and hearing about my music doing the same for other people is mind blowing. Music Heals!

Q) How do you approach collaboration when producing music and song writing? Is it a joint process or do you work individually before coming together?

I prefer to be in the same room and build from scratch, like I always do with Fatima for instance. I feel you can hear the difference when there is a real synergy happening in the music. Same when I worked on Kutmah’s debut album. He would come around to my studio, so we can put our heads together and create.

Q) Tell us about your connection with Kutmah: what’s it like producing music with him? What different vibe do you bring and how do your visions connect?

We have become close friends over the years and we simply share a similar ear on music. His taste is incredibly inspiring and he has exposed me to a lot of great music. Our visions are often similar; our approaches of recording music are very different though. He works with a minimalistic setup creating rather dirty sounds, where I have more of a studio setup with instruments, synthesizers etc. and create a much cleaner sound.

One of my favourite songs on the album called “Bury Me By The River” with Gonjasufi was written and recorded from scratch by me after an idea from Kutmah.

I had to stop comparing Berlin to London. You simply cannot do that, because of their different history, evolvement and setting. I feel general life quality is much better out here in Berlin though. It’s green, there is more space, not as expensive (it’s getting there) and there is beautiful nature nearby.

Q) Both you and Kutmah moved from London to Berlin recently, what’s different about that city at the moment?

I had to stop comparing Berlin to London. You simply cannot do that, because of their different history, evolvement and setting. I feel general life quality is much better out here in Berlin though. It’s green, there is more space, not as expensive (it’s getting there) and there is beautiful nature nearby. I think things are more out of balance in London than they are in Berlin.

Q) Do you constantly write music inspired by the moment, or is it a process of producing in a specific space, time and headspace?

I always record music, almost everyday. I have a lot of different musical ideas lying around, of which some grow into more; others are just meant to be for me and my personal development. I often record and leave it to rest, because I feel it has to ripen for a bit until I know what it has become. All releases are obviously just a moment in time, some kind of window into the process of creating. It’s different every single time. Every song, every release comes to life differently.

This last release is heavily influenced by me getting into hardware synthesizers and sound synthesis in general. I’m always in the moment when I create music and whatever I feel in that moment goes straight into it. I had to deal with feeling opposite emotions like anger and joy the same time during the time period in which this release was mainly recorded. It became a reflection of that I guess. The A and B Side being opposite poles of some sort. Although balance is something I naturally seek in everything.

Q) Being Chilean, growing up in Germany, spending time in London, has that given you a unique lens on the world, musically and otherwise?

I think being exposed to different cultures opens up your horizon in many ways and also helps understanding that everything and everyone is connected. I was blessed to grow up speaking German and Spanish and I was able to learn a solid level of English while living in the UK for many years, but the one true universal language is and will always be music.

Q) You seem to have a love for the natural world, do you think that technology and nature can co-exist? Going forward in time, in your ideal world what would be an ideal way for these two spaces to coexist?

I don’t think technology necessarily means not being natural. Technology can be very much in balance with nature, since it is mostly just trying to imitate or trying to understand something from within nature. I hope we as humanity will be able to somehow establish a more balanced way of taking and giving, and be more respectful with nature. It feels as if humanity sees itself as the creator of it all, ignoring planet earth as the mother of all life.

Q) You promote music to heal and increase wellness. At its purest form, do you think music has the ability of doing? And what else do you couple with music to provide mental wellbeing?

Absolutely. Music possibly imprints itself deeper onto the brain than any other human experience. There is a reason why there has always been music in some form of singing or drumming in the history of the human being. It helped passing on knowledge through lyrics and helped to cure physically through frequencies.

Sometimes music needs the right moment or environment, but pretty much always has the ability to alter our spirits. It’s being used or rather misused to manipulate us every day in the supermarket, advertisements, movies etc., already. There are tons of different approaches to use music [in order] to heal the body and soul. It’s a very interesting topic and I truly believe in its power to do positive things.

Q) What advice have you been given that has resonated with you?

“The greatest thing you’ll ever learn, is to love and be loved in return.” ~ Eden Ahbez