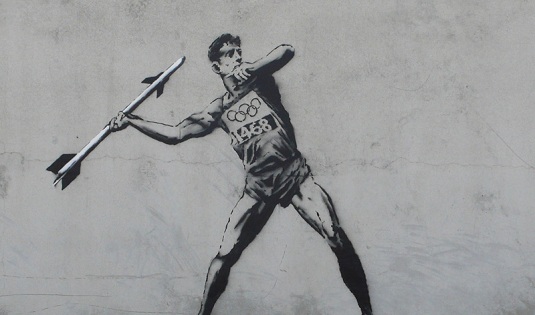 There is nothing like being made to feel like a party pooper to stop people from raising genuine concerns.

‘Get Behind the Games’ has become the mantra of public figures and politicians keen to jolly up all those who just don’t seem to be able to see past the G4S security fiasco, or that the biggest global celebration of health and amazing ability has descended tiring and predictably into an event for the highest bidder. Given that tickets are going on the black market for £100,000 for the 100 metre final, how can I, we, really be involved?

On Any Questions on Radio 4 last weekend, former chancellor Norman Lamont said that the proposed Public and Commercial Services (PCS) union strike this week was “doing damage to our reputation”, and was timed to cause “maximum embarrassment while the world is watching”.

The strike by frontline staff at the Home Office, including in the Border Agency, the Identity and Passport Service and the Criminal Records Bureau, against 5,000 job losses was called off with just days to go to the Olympics. The government claimed irregularities with the ballot. The union has said that they have been promised that more than 1,000 new jobs will be created. Nothing like a clear cut end to a disagreement…

I wasn’t sure whether the action was a good idea. It would make a big impact, certainly, and really highlight the need to keep the jobs that are now on the line, but the media coverage would have been unbearable. Any sense of the reason would be drowned out by front-page pictures of visitors queuing, babies in Wenlock suits with their lower lip out, to have their passports checked.

But really, we have known that we would be hosting the games for seven years. The Government has had two years in office with this knowledge. Why did they only find out two weeks beforehand that G4S wouldn’t be able to fulfil its commitment to provide security staff? How wasn’t security -sad world that we have created for ourselves in what should be a time of worldwide solidarity – top of someone’s list?

We knew that the eyes of the world would be on us, and it seems we buckled under the pressure.

If the world got the impression that workers are unhappy, jobs are being cut and private sector contracts aren’t improving standards, then they would be right. The media cannot report what doesn’t happen. They can only find bad news if something has gone wrong.

I want to support our Olympians and Paralympians to do things that I could never do. But I think we are all just as sick of the tales of incompetence as we are of finding out how brands are going to help us pick up our must-have Games souvenirs.

If more time had been spent managing projects, thinking about how to deliver something that we could all be truly part of and proud of, not scrabbling for the cheapest option in our race to the bottom, or worrying about the perception of the work, the whole project would have been seen as more successful.

Perhaps we, the people, can take this historic moment of competition to appreciate the one thing that makes us all the same. We are #notpartof2012, we are the Olympic Fringe. We have a mass communication tool at our fingertips, the largest collective in human history, and no doubt lots of lovely people with fun, and free ideas. We could do anything. Edinburgh ain’t seen nothing yet.

Why let the machine of the state take food to our mouths if we can do it, and feel good about doing things ourselves? This is ours, Britain, our Games. Let’s find some way to make it feel more like that.