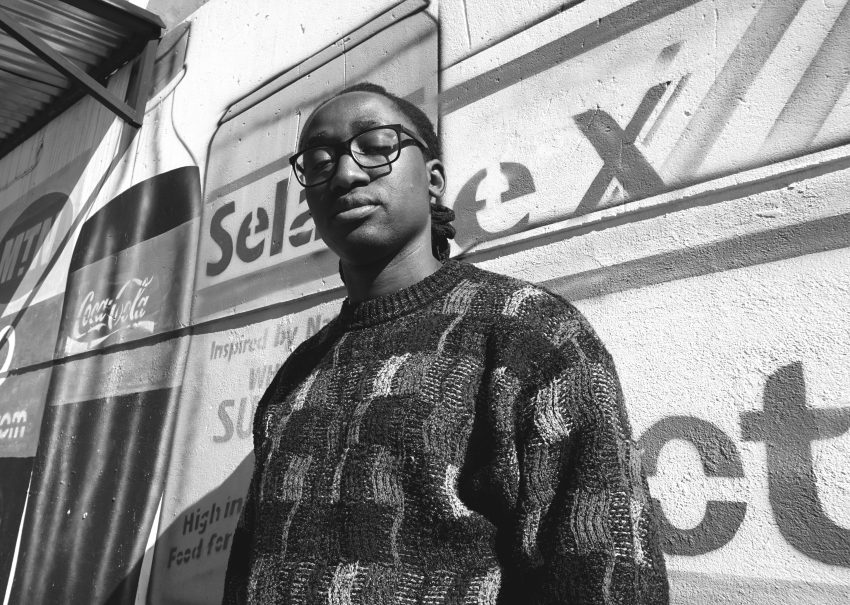 Almost a decade ago, Zimbabwe born graphic designer Osmond Tshuma moved from a Harare design studio to Johannesburg University. Influenced by the content he found in South African magazines and on TV, his aim was ‘to be and do better’ than he was. While studying, he developed a passion for typography, which he used as a tool to comment on southern Africa’s history. From this, his Colonial Bastard Rhodes typeface was born. A few years on from creating that font, he’s moved into the world of advertising direction. Now, with award-winning work under his belt, he has a long view to use his creative platforms to continue to tell nuanced African stories, using the broad spectrum of design.

Q) When and why did you create the Colonial Bastard Rhodes typeface?

During my final year at Uni, I was writing my paper on post-colonialism in contemporary Southern African advertising; then I thought of linking this to my practical module. The idea was to create a typeface that echoed the characteristics of Cecil John Rhodes: a wealthy, power-hungry imperialist. So, the font was a social critic of him and colonialism in southern Africa.

Q) What were some of the design methods you used?

Because I’d been working on the report for five months, I’d gathered some research on colonial stereotypes, along with some of the advertising material of the era. Africans were often shown as “savages and unclean”. I chose to use the typeface from the ‘White Man’s Burden’ Pears Soap advertisement, which looked like Bodoni font.

Q) Was there meant to be humour attached to the name of the font?

No. The title was my own way of expressing my frustration at how these colonial figures are still being celebrated today. Colonialism was an act of brutality clothed in the farce of civilisation. Families were displaced, enslaved, massacred, wealth stolen and yet the names of these perpetrators are mounted on street names and buildings. I guess it was meant to provoke a visceral response towards the images and history of Cecil John Rhodes.

Q) Could any other ‘colonial bastard(s)’ have substituted and what would their fonts look like?

Q) It’s interesting that you created this font a couple of years before the #rhodesmustfall and #feesmustfall movements happened. Do you feel that you predicted some kind of international political zeitgeist?

I can’t say I predicted it. I feel like the #feesmustfall movement has always been there; stretching 40 years back to 1976. It might not have been that well known but I believe the university student representatives across South Africa have been fighting over these issues before it gained national and international momentum. A luta Continua. I think the #rhodesmustfall movement that took place in Cape Town was inevitable. We can’t change what happened in the past but we can reshape the future.

Q) How come you moved from typography to advertising?

I was first hired as a junior designer by OpenCo, a Johannesburg through-the-line agency. During my time there I slowly fell into advertising as most of the jobs I was assigned to were more the art direction type than anything else.

Q) What’s been the best ad project you’ve worked on so far?

At OpenCo my copywriter (the amazing author Jason Hes) and I worked on a collaboration project between Jameson Irish Whiskey and Soweto Gold Beer. The result was the remarkable, Soweto Gold ’76 – a beer designed to honour the brave souls of the Soweto Uprising. Working on the project was emotional. It made me realise that we mustn’t take freedom for granted. We are here because of those that fought for us.

Q) …and the most challenging project?

IKwekwezi FM – an Ndebele radio station. It hadn’t rebranded for nearly 20 years. The challenge was to design an identity that upheld Ndebele heritage and culture, but gave it the freshness and vigour it needed to take its place in the modern South African landscape.

Q) What kind of impact did the success of the new identity have?

The success wasn’t just that it was a finalist for both the Loeries Awards and Pendoring Awards. It was how people reacted to it and accepted it. When the logo was launched, it was posted on all of the station’s social media platforms. The engagement was amazing. People debated about it. Most of the station’s listeners loved the design because they could see their tradition and culture being represented through it. For the first time in my life, I saw what an impact design could have. One time, I was wearing a promotional T-shirt with the new logo on it, and there was a lady who approached me at Noord Taxi Rank who shouted, ‘IKwekwezi FM!’ with a big smile on her face. That moment showed me that some brands are more than just the logo. They are an embodiment of the people.

Q) You stay well connected with Zimbabwe. Can you talk about the collective that you’re part of over there?

Design Massacre. It’s a creative hub that consists of more than 60 multi-disciplined designers from all creative sectors; graphic design, photography, sketch animation, motion graphics and film. We use WhatsApp as a communication platform. Members post their work so that the group can critique them. The aim is to be the leading design base in Zimbabwe and to represent design in the most innovative way possible.

Q) Do you plan to eventually go back to Zim?

Well I still stay in Zimbabwe; I just travel between there and South Africa, even though I spend more time in the latter. My creative business partner Nontokozo Tshabalala and I created a platform, Mam’gobozi Design Factory to produce work that we love. I would like to establish it in Zimbabwe too.

Q) What does the name mean?

Mam’gobozi is a lady who knows everyone’s business. In our context she’s a character that speaks to what we do. We are an African brand hoping to create proudly African design work so she becomes the person to tell people about us. Our ambition for the future is to build Mam’gobozi as a powerhouse in design and advertising, and also as a typographic foundry in Africa.

This interview comes from a partnership between Let’s Be Brief and People’s Stories Project (PSP) — part of the British Council’s arts programme in sub-Saharan Africa. Click here for more info.

Deprecated: Function get_magic_quotes_gpc() is deprecated in /customers/3/8/6/letsbebrief.co.uk/httpd.www/wp-includes/formatting.php on line 4387