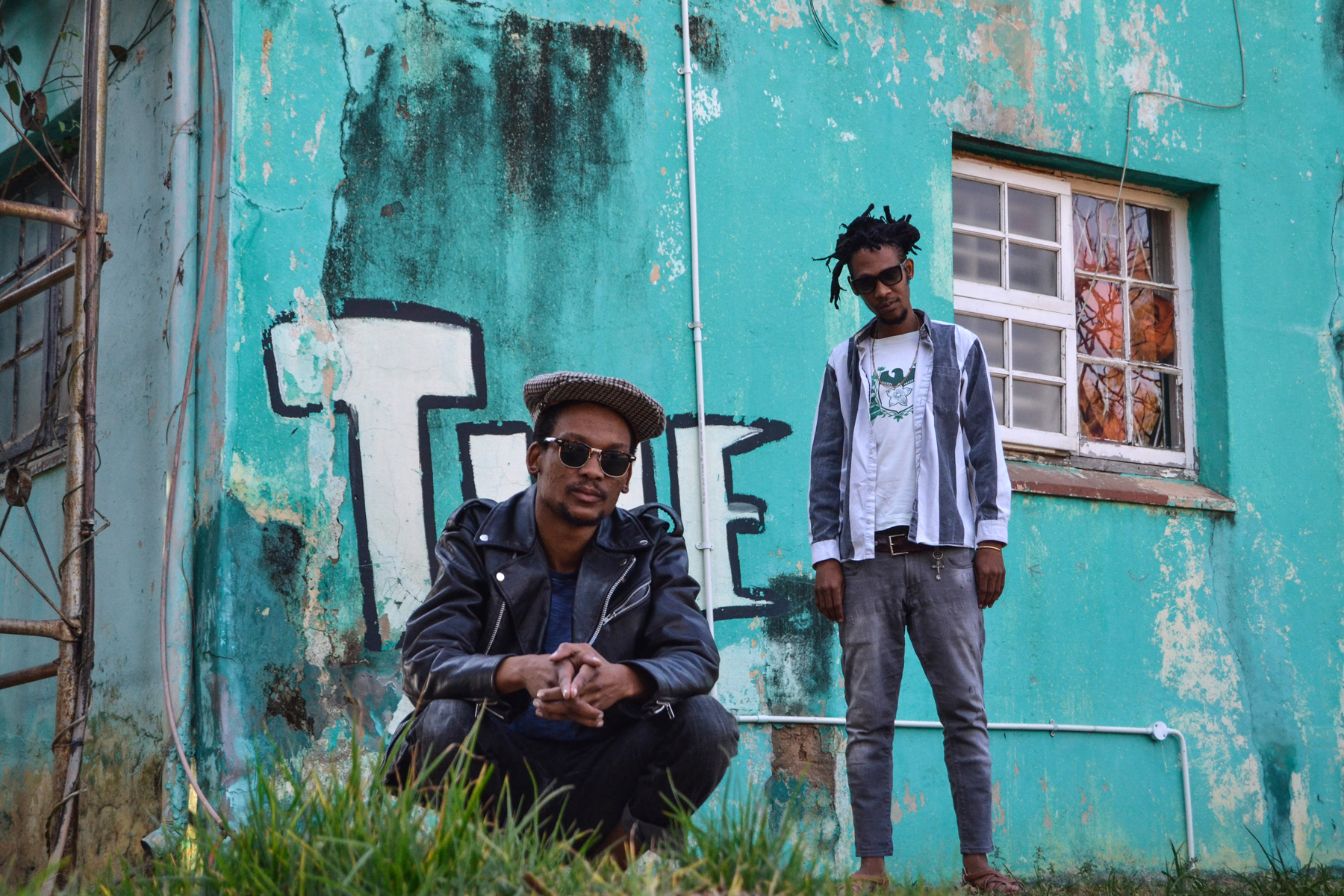 Our sound, right now is Mandela Pop: A reflection of where we are culturally as a rainbow nation and where we aspire to be.

Smangaliso ‘Smash’ Mfula and Nyameko Nkondlwane of Radio 123 are no rookies in the South African music industry. They first emerged on the scene with an outfit called Impande Core, a band that came out of Vosloorus in the early 2000s, and had the Johannesburg underground scene abuzz with their organic sound, dubbed Carrot Funk. Known as music for the earsight, this sound had club Zen’s dance floor feeling extra sticky every Sunday in Maboneng, downtown Johannesburg.

After the outfit disbanded in 2015, Nkondlwane and Mfula sketched out a role of their own and established a four-piece band called Radio 123. They’re led by Mfula’s crooning township slang vocals, accompanied by a nostalgic trumpet – resuscitated by Nkondlwane – with snares and a syncopated beat provided by Lunga Majaja on drums and a walk-in baseline strummed by Sbusiso Ndlangiso on bass. They call their new sound Mandela Pop, which they say reflects who South Africans are as a rainbow nation, and where we are headed culturally. In 2017 they released a four-track EP titled Manga Manga, which saw them reclaim their status in the South African alternative scene as the truly seasoned savants of their time.

The duo who have recently completed their sophomore EP, Umoya ka Mama, sat down with Toka Hlongwane for a three-way conversation.

Q) How did you guys meet?

Nkondlwane: When we were all playing with Impande Core. I think this was 2002…yeah between 2002 and 2003. That’s when I met Smash. But before that be ngizwela ukhuthi ku nenye iauthi engathi eya kini… (people would tell me that there is this dude who likes me, his name is Smash, and he also makes music). Eventually, we met and started making music with Impande Core. At that time, I was doing rap vocals for amagents (the guys), but I was also eager to go to school and learn an instrument. Smash continued making music with Impande Core while I went to school.

Q) You dropped your first EP Manga Manga in 2017. How was it received by the market?

Mfula: It was surprising that people, even from outside the country got the EP. A lot of people locally kept saying we must release another one. It was a good start. The EP put us on man. We performed at gigs like Afropunk, Mielipop, Bushfire, Oppikoppi, Basha Uhuru, Fete de la Musique and Primavera. We had four songs to test the waters and the waters were tested… Our traditional fans from the Impande Core days said our current sound is a bit mainstream and not as great, which was good feedback nonetheless, but people who haven’t heard us before loved it. We now have an array of people who like our songs from Pantsula’s ekasi to amaSlay Queen loving our song Uthando. It’s great, because now our music is more accessible to everyone and not just limited to certain music lovers.

Nkondlwane: The EP was received very well man, I remember even err … OkayAfrica listed our title track Manga Manga as one of the best 30 South African songs of 2018, although we didn’t have enough budget to push and market it well. I guess people just connected with it.

Q) Who did you guys work with on the project, and how important was it to work with those specific people?

Nkondlwane: We worked with Tshepang ‘RMBO’ Ramoba and his Post Post company. RMBO was the producer of the EP. He’s a legend himself in the alternative scene, best known for being the drummer of the BLK JKS. He is the guy who was there in the early stages of Impande Core when we were performing in Soweto. He is the cat who we felt ukuthi (that) he understood the culture more than anyone else who was around us at the time. And so we thought, to preserve this vibe asinayo enye indoda engakwazi o ku understander le taal (he was the perfect guy for the job because he understands the sounds and language).

Q) How would you describe your sound and how much influence does your earlier (Carrot Funk) Impande Core days have on your current music?

Nkondlwane: Our sound, right now is Mandela Pop, but it was birthed by Carrot Funk. Mandela Pop is influenced by how we perceive our beautiful country, as well as its issues. It’s a reflection of where we are culturally as a rainbow nation and where we aspire to be. The sound is influenced by an array of genres, like Sokkie – an Afrikaans sound that is native to Boksburg. We are also influenced by uMbaxanga ema taxi rank and Kwaito as well. These are the sounds we were exposed to growing up in Vosloorus in the East Rand. So, the Impande Core’s Carrot Funk sound was like a school of thought for us as musicians.

Mfula: Our current sound is a fusion of a lot of genres, but right now we are intentionally trying to make more South African vernacular and township slang, but still make it sound global. It’s what we had always wanted to do with Impande Core, because we would fuse a rock song with a jazz sound, or a funk song with pop. We were always trying to be abomachenic bama genre (genre mechanics).

Growing up and visiting Eastern Cape was fun because the rural kids would treat kids from Joburg as if they were from America.

Q) Both of you guys are originally from rural Eastern Cape where tradition is rich and important, yet you live in Vosloorus, a culturally diverse urban township in Johannesburg. How have both these places influenced you personally and musically?

Mfula: Growing up and visiting Eastern Cape was fun because the rural kids would treat kids from Joburg as if they were from America. But after going to initiation school I realized that there isn’t much difference between urban and rural folks. Life in its essence is the same everywhere. But I must say, there was a huge difference in how we approached music, Nyameko can attest because he went to the mountain before I did. Before our initiation, we would just make fun music that was heavily influenced by rock, funk and so forth, but after spending time on the mountain and singing traditional Xhosa folk songs it changed how we perceived our music and used our languages. Having an influence of both places is magic because when we compose music we bring both elements together. Hence, every now and then I travel to Eastern Cape to spend time on the mountain because there’s juice there and the culture and music is rich.

Q) What are you guys busy with currently?

Mfula: We finished working on our new acoustic EP (Umoya ka Mama), which dropped at the end of June. It’s dedicated to Winnie Mandela and celebrates the strength of all the women out there. We’re also working on our solo projects. Nyameka is dropping an album in the coming months and so am I. We’ve been busy man …We’re also collaborating with some film cats, working on some fashion shorts. We just dropped a new video for our single Sengiy’one (I am now alone) in collaboration with Film & Vinyl Club.

Nkondlwane: It’s been very busy joe. Besides our own projects, we’ve also been featured on several projects by other musicians you know. We’re featured on Damon Albarn’s Africa Express album, so there is a lot to look forward to.

Q) What message would you like people to take away from your music?

Mfula: We all need each other.

Radio 123’s EP, Umoya ka Mama, is released in July // This interview by Toka Hlongwane comes from a partnership between Let’s Be Brief and People’s Stories Project(PSP) – part of the British Council’s arts programming across Africa // Photography: Malakai Saadiq