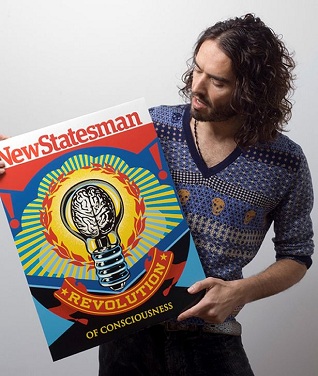 It seems that the BBC can’t get enough of Russell Brand. The viewing public were given another chance to see Jeremy Paxman and Russell Brand go head to head in round 2 of their Newsnight meetings. “Who are you to edit a political magazine”, asks Paxman in reference to Russell Brand’s recent guest editor post of The New Statesman. From that point we bare witness to a ten minute intellectual assort – wrapped up with jovial and satirical humour – on the BBC Newsnight presenter.

Brand has successfully positioned himself as a social commentator, discussing the follies of current political systems, the ridiculous ideas of celebrity and the injustices of corporate and political processes. All juxtaposed with the sub-narrative of Brand as the lothario, ex drug addict and seemingly frivolous ex Big Brother presenter. However, a willingness to share in his past generally serves Brand well. With nothing to hide, Brand is able to reveal the underbelly of modern society in a caustic, funny yet poignant way – like all great comedians can.

This approach has the marmite effect – attracting its lovers and haters. In challenging the very notion of authority by those in perceived positions of authority, or as Paxman put it “the ‘right’ to do such things”, Brand’s innate empathy transcends the limited premise of an interview, wittingly ending with Brand commentary.

Existing paradigms aside, in Brand’s case we really are seeing the birth of the new statesman.