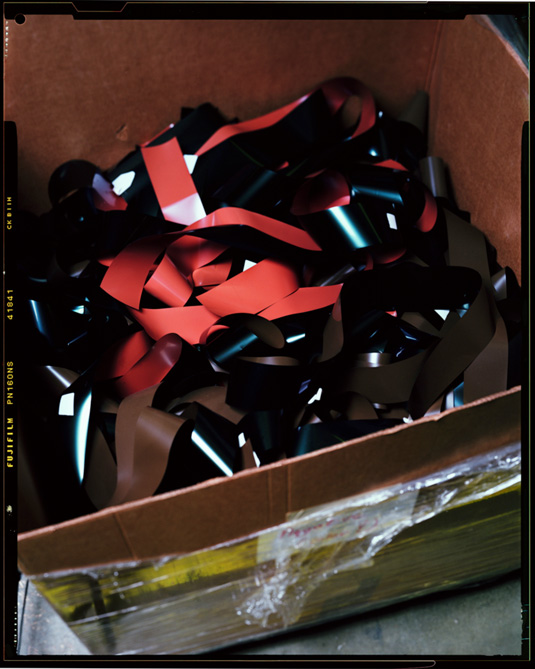 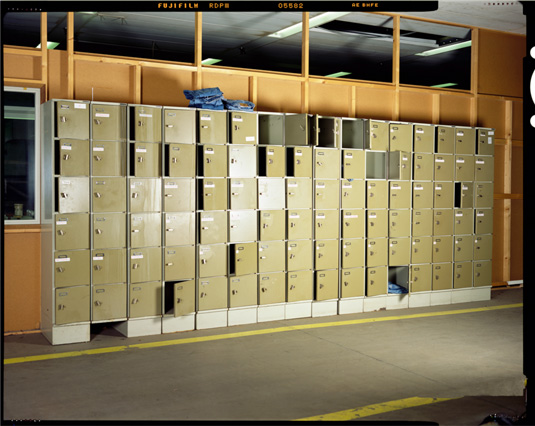 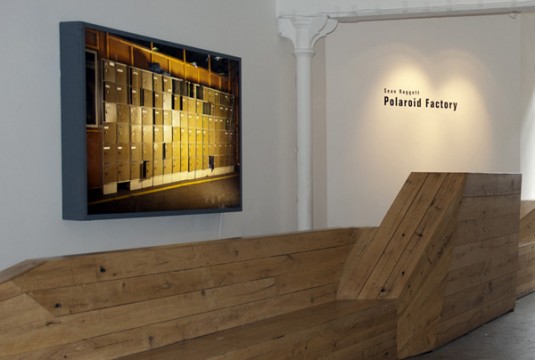 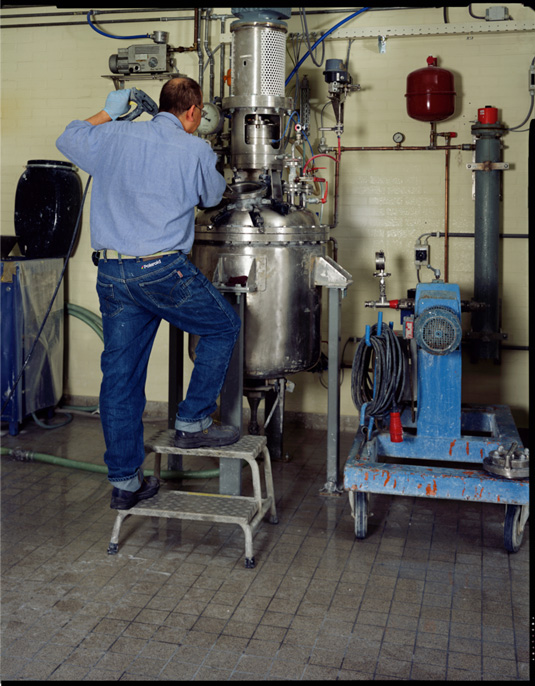 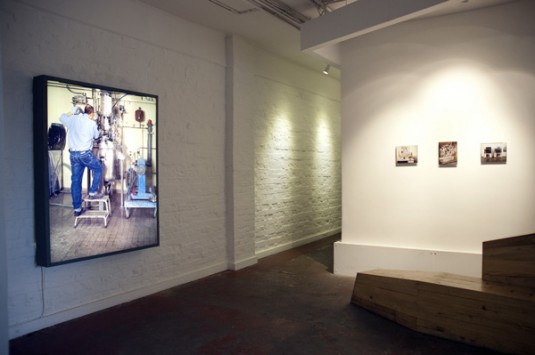 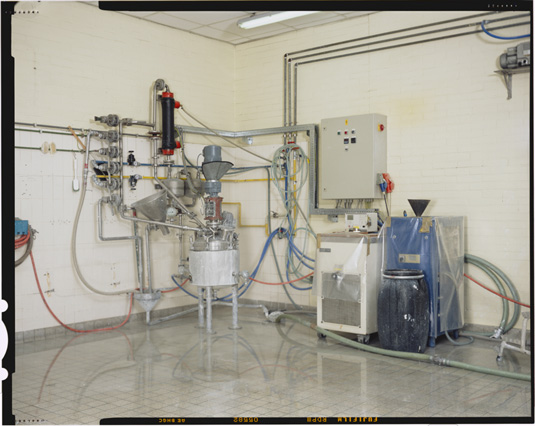 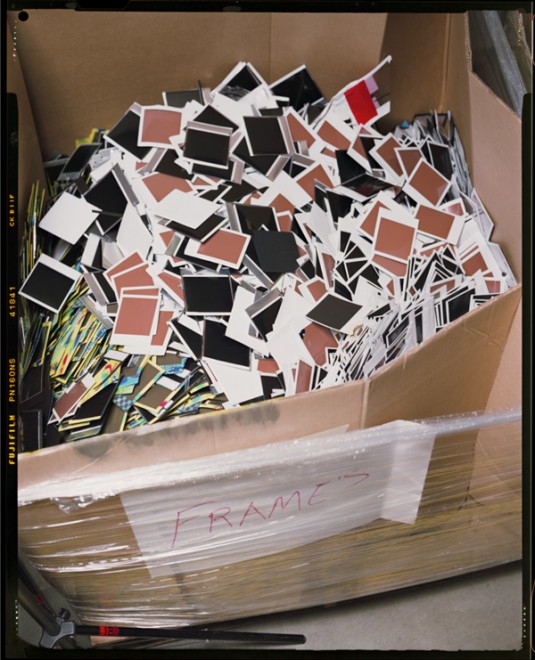 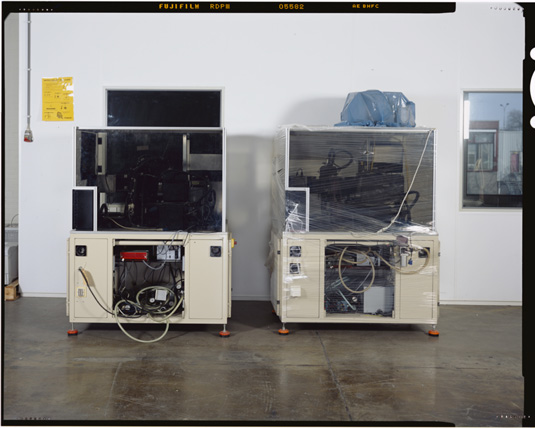 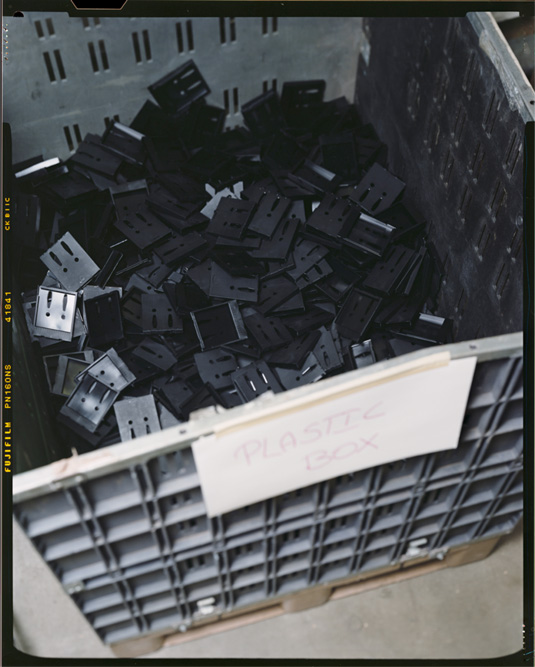 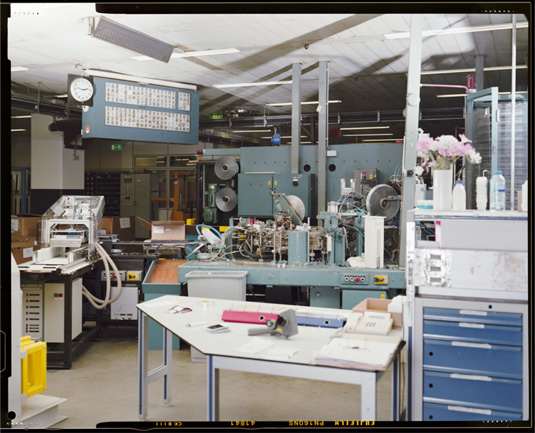 There’s a saying that you never miss the water until the well runs dry. The same can be said of the moment Polaroid announced in February 2008 that it would stop producing instant film for Polaroid cameras.

We talk to photographer Sean Raggett, who’s exhibition at the aptly named Printhouse Gallery in Dalston goes behind the scenes of the Polaroid film factory in Enschede, Holland to explore the magical mechanics of photography and photographic reproduction.

Q) The Polaroid Factory sounds as mystical as Charlie’s Chocolate Factory. How did you come across it?
The title Polaroid Factory references a very specific era, and it is important to note that the Polaroid Company no longer exists since its bankruptcy in 2001. The title was chosen to reference this now defunct multinational corporation started by Edwin Land in the mid-20th century. After the demise of this iconic company, each of the world’s four Polaroid-producing factories was dismantled piece-by-piece by region: Asia, North & South America, and finally Europe. Because of this, the secrets of the manufacturing process were almost lost. Had it not been for a small, dedicated group of passionate investors re-opening the plant in 2008 as The Impossible Project, the magical process of instant film would have been completely lost. So from that point of view, the title is indeed as mystical as Charlie’s Chocolate Factory since the process of taking a Polaroid is so magical, and this series of photographs provides the audience an insider’s view of a very special place.

Q) What was it like to spend time working there? And what does a Polaroid factory smell like?
My assistant and I spent 2 long days at the factory in Enschede in the Netherlands – strangely enough also the global home of Grolsch beer! The staff were extremely accommodating and allowed us to move around freely, except they asked us not to photograph the specific chemical containers in the wet room where they actually make the photographic emulsion. It was a bit going to Kentucky Fried Chicken HQ and not being able to see Colonel Sanders’ secret recipe. In fact, one of the showpiece images from the exhibition, “Womb,” is of a worker cleaning the emulsion cauldron – probably the last place in the world where this magical goop is manufactured.

The building complex itself is quite large and in its heyday employed over 300 full-time staff, however in its incarnation as The Impossible Project it employs only 31, so most of the time the sets we created were a bit like a ghost town: an appropriate context for the intent of the resulting photographs. Also, it is crucial to note that more than half of the current Impossible Project staff worked at the old Polaroid factory, without whose expertise it would have been impossible to restart the machinery after it had started to be dismantled.

As well, the Polaroid Corporation would not give the Impossible Project team the recipe to the instant film, so Impossible sells their instant film despite the fact it is still imperfect and somewhat unpredictable. In terms of the smell –since I like the odour of petrol – the simultaneously sweet and acrid scent of the chemicals was vaguely attractive and also reminiscent of years spent in the darkroom at art school developing my own photographic prints. The factory smelled of past and present at once, of childhood and of loss.

Q) At 48×72”, it’s safe to call your prints ‘large format’. What’s really striking though is the immense level of detail contained within each reproduction. Talk us through the production process if you will.
The exhibition contains 3 large chromeogenic transparencies in industrial lightboxes, as well as 3 relatively small perspex face-mounted colour photographs. The exhibition space at the Print House was challenging to work with because during the day it acts mostly as a reception area and the inherent dialogue between the photographs could have easily been lost.

I felt that the bombastic presence and juxtaposition of the gigantic backlit transparencies would be served best by a counterpoint of 3 small frames that reference and inform one other without contradicting their relationship. In terms of the production process, the photographs were made using a large format film camera: the original films are 4 x 5″ and therefore contain an immense level of richness and detail. The film is then drum-scanned and printed using one of only a handful of remaining traditional large format processing facilities on a backlit substrate known as duratrans.

These prints are archival and last for decades, and are visually and functionally similar to bus shelter advertisements that in turn reference other contemporary constraints and demands on audiences’ attention. It is a challenging and expensive process. The resulting effect is one of simultaneous proclamation and introspection, and I didn’t feel this could be achieved using exclusively digital media.

Q) We live in a digital age, but with apps like Instagram, we seem to have not yet given up our love affair with the analogue feel / aesthetic. How would you describe that relationship?
This is an interesting question since there are still many people born into the pre-digital age who are well aware of the challenges, limitations, and joys of using analogue media. On the other hand, for example, my 4-year-old niece and nephew Naiya and Keagan will grow up in an environment where touchscreens, social media, and cloud computing are ubiquitous. Despite the fact these technologies necessitate a hard mainframe of some kind at their root, I suspect that awareness of this starting point will naturally diminish. Therefore the potential for users to wander into a clinical blankness, culturally speaking, to continue down this path of simplicity and electronic dreams without awareness or criticality of the simulacrum seems inevitable but somehow unfortunate, in the same way most young music fans do not ‘miss’ the relationship of an album’s artwork, gatefold poster, or record’s smell, since they do not know it in the first place.

To answer your question, I do wonder what the attraction of an app like Instagram is to users who have never used traditional film, but it is fun and easy to use. So on the one hand the relationship is itself a rhizome, a desirable but uncomfortable Baudrillardian fantasy that underpins the audience’s yearning for the so-called real. On the other, film was, and always will be, the original method of drawing with light.

Q) Describe your approach to photography in no more than two sentences.
My approach to making a photograph is to slow down, see what is there, recognize my involvement or interference in whatever projection is occurring, and capture that. I am attracted to beauty, dissonance, and contradiction, and I approach photography with the aim of likewise informing, questioning, and portraying these constructs.

Q) What is next for you? Do you plan on taking this very large show on the road?
At the moment I am working on another series of photographs I shot last year in Turkey, a series titled Unknown Voyage. I spent three days in the stairwell of an apartment building in Istanbul mostly in the dark, contemplating the photographic process, uncertainty, and death. It sounds dark, but the resulting photographs are beautiful! I would like to show Polaroid Factory at another gallery in Central London, and am in discussions with various people to make this happen at other venues in the UK as well