Founder of Signs & That, Femi Idowu-Read, tells us how he went from Graphic Design Grad to running his own design company 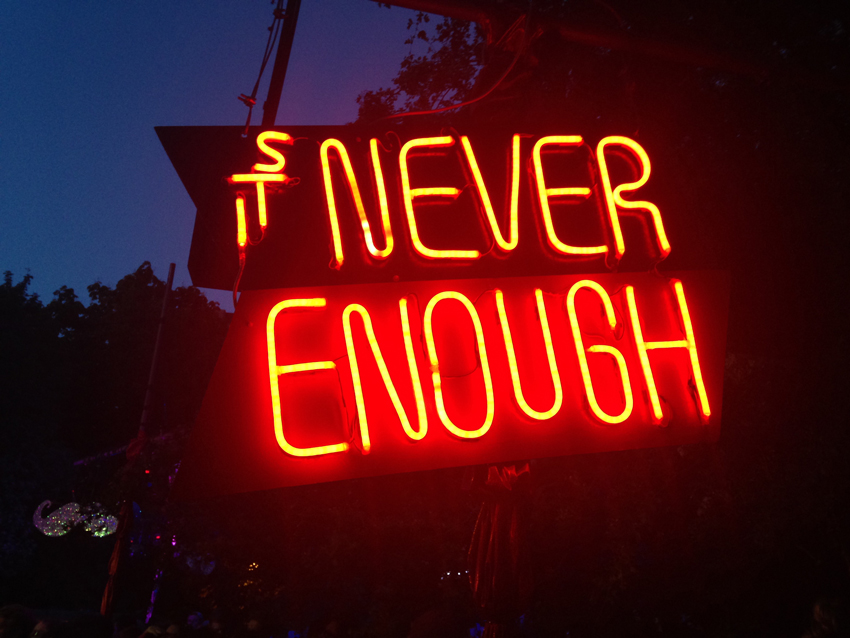 I was basically volunteering at music events and festivals. Some of it was paid-ish, some was subsidised, some cost me money! One of the best things about that process was being able to build up the links within the industry, most of which I still work with now and that was over 4 years ago.

A Wish You Were Here study collated by UK Music, saw a rise in the number of people attending UK gigs and festivals increase from 27.7 million in 2015 to 30.9 million in 2016. This significant 12% increase in live music audience figures last year, contributed a notable £4 billion to the UK economy.

Good news then for the plethora of brands able to position themselves in the minds-eye of audiences with money to spend and a desire to spend it. Good news also, for the brand builder.

Cue then bespoke signage, branding, and stage design, Signs & That. The brightly lit signpost to success will more than likely be made by S&T founder, Femi Idowu-Read from his Bristol HQ. From bespoke lightboxes to large-scale festival builds, a comprehensive commitment to networking and pure hard work has seen the creative sign-makers carve a niche for themselves in a highly competitive — and in demand — creative service industry.

Q) What has been your pathway to creative industry?

When I graduated from Graphic Design at UWE in Bristol I was already working in the creative industry really. Working in a loose sense anyway, I was basically volunteering at music events and festivals. Some of it was paid-ish, some was subsidised, some cost me money! One of the best things about that process was being able to build up the links within the industry, most of which I still work with now and that was over 4 years ago. Through these various contacts I started making light boxes for various club nights, a barbers Shambarbers and some small restaurants.

The light boxes are basically where I managed to carve out a niche, it seemed I specialised in something without realising there was a big demand for them. Working on the light boxes gave me just enough money to get by and the freedom to take on decor and set building projects, which is where were my true passion lay. Throughout all my work there has been a clear link with music and the music industry. Pretty much all my clients have stemmed from my involvement with music nights, running my own and working on other peoples.

Q) Sign making is a profession with great heritage, how did it originally stir your interest?

Typography. I love typography and I think signage is almost typography in its purest form. It can be done sooo badly but can also be done expertly well. There’s a vast selection of signage and I’m cursed with forever analysing it.

Q) You launched the company relatively soon after graduating. What inspired you to launching your own business so soon?

When I left Uni, I was basically done with Graphic Design. I was bored of it and 3rd year had made me resent the process! So I think that, coupled with the fact that I’m not a massive fan of being told what to do it was inevitable that I would have my own company.

Truthfully I thought that I was going to be a freelancer for a while, but one thing basically led to another and here we are! I made a lot of clerical mistakes though. A lot. So it might have been worth having a clearer path laid out — it definitely would have saved me money and time. Get an accountant. It’s worth it.

Q) What sort of clients do you work with?

Our client base is very broad… Music nights, restaurants, cafes, charities, the council, festivals, private corporate events, TV: basically anyone that wants anything made. There are so many different versions of temporary events out there and so many things that need a good sign!

Q) You’ve created a niche, producing signage and sets for festivals. How did that come about?

There’s loads of people doing what we’re doing to be honest with you, and sometimes I wonder how we managed to create such a strong network. But I think that always making sure you do your best with the work you produce puts you in good stead. And be nice and don’t have an ego. Those things are really important.

But also I think think its to do with what I said earlier about the light boxes. As we’ve grown (we’re a team of three now), the light boxes have been our bread and butter. It’s allowed us to commit to this as a full time career sooner that others might have. Which makes us available to do any work when asked as we don’t have other commitments. Also we said yes to anything when we first started, even if we didn’t know how to make it. Say yes and figure it out after. YouTube tutorials all the way.

Q) What’s your creative process to approaching a brief? Do clients come with set ideas? Or do they leave you to it?

It can vary quite a lot. Generally with the more corporate stuff, they will have a designer on their team that will provide a fairly accurate guide to what needs to be made. But then when we’re working in the set building stuff — that’s when you generally get more creative freedom. There’s usually a theme or guide of some sort, which I will then create a Pinterest mood board from. If that’s in the right direction I will come up with a design based on that. If it’s a bigger client then we can do more designs and work on full proposals with basic 3D renders of ideas.

There was a point in my life where I was a little disheartened by the idea that I would never be able to move people in the way that music moves people, but I think creating spaces for people to experience music has been my way around that.

This is quite a hard one. I’ve had many different things influence my work and creativity. But I think music events would be the main influencer. Or music as a whole. There was a point in my life where I was a little disheartened by the idea that I would never be able to move people in the way that music moves people. But I think creating spaces for people to experience music has been my way around that. Being able to enhance an experience through art and design I guess is what drives a lot of my thinking. That idea can work across a lot of fields: be it restaurant eating, festival stages or small room parties, or even a sign pointing in the right direction.

Q) What has been your most exciting / challenging accomplishment so far?

I think my project ‘Standing on Giants’ (pictured) would have to be equally my most exciting and challenging project so far. For various reasons, firstly because it’s the first real piece of work that I would actually consider to be a piece of art. I was asked to create a piece about empowerment, given a budget (which I over spent by £300 — my choice) and proposed this idea to create a watch-tower that was a representation of the phrase ‘standing on the shoulders of giants’, which basically is the idea that (some) are in the fortunate position in the modern age, based on the achievements of those that went before us.

Classic examples would be the abolition of slavery or the suffragette movement. So basically the tower has an internal stair structure that starts off as really big steps and then gradually gets smaller as we head up the tower. Each step represents a leap in humanity. They started off big but have become smaller as time goes on. We will never have a moment like the abolition of slavery again.

In the first year we were only able to build the structure as that’s all that budget allowed, but in the second year we were able to paint it properly and also introduce my friend Maximillian Malone, who is a collage artist to interpret the concept. This really was a true labour of love — especially the first year.

Horribly long hours, in the rain, making a structure more complex than we’d ever done before. All the while being worried the whole thing might fall down! Two years and no problems though, so all good!

Q) What do you think are the most important skills and/or qualities a creative needs in order to transition into a freelance business?

I think a lot of it comes down to confidence and the willing to take risks. It’s really not an easy process and you’ll be poor for quite a while. I still don’t make that much money but I’m not eating beans of toast for dinner any more. Also just talk about your work to people, and what you’re doing. Everyone wants to help out a mate so you can get work just from a casual conversation. Finally and most importantly, you’re only as good as your word — especially in the beginning. If you say you’re going to do something, do it. And do it on time. And do it to the best of your abilities.

Q) What would be your dream project or client and why?

Dream project would have to be curating my own exhibition or festival. I think the collaborative process is amazing and you really never know where a collection of ideas and minds can lead you. This coupled with the freedom the blank space of a big field or building gives would allow you. You could do some amazing things.

Q) Experiential events such as festivals have become big business. What do you foresee as the current trends and culture that will impact our ideas of the industry?

I think the combination of theatre / performance / music will be ever more the focus, rather than events that are based around each individual. But also I think that basically there’s enough space for people to do whatever idea or interpretation they want, as long as they promote it well.

These are the three books that I am 2/3 of the way through… I should finish them as they are all great books.