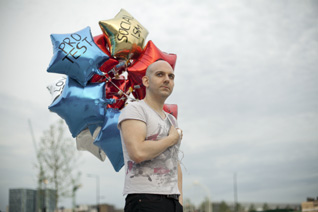 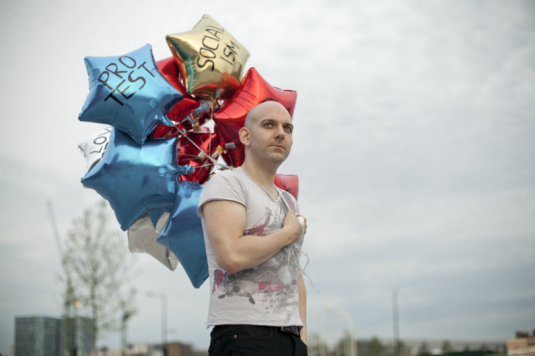 Chris Coltrane is a stand-up comedian by night, a writer by day and “a thorn in politician’s arses whenever the opportunity arises”. He recently appeared in No More Page 3 and Everyday Sexism’s Stand Up to Sexism, and yes it was funny, as well as at the People’s Assembly where he talked about his activism with UK Uncut. This included setting up a library in an unscrupulous bank with a load of school children, with of course, comical results. He also runs Lolitics – a comedy night in north London.

Q) Why and how did you get involved with political activism?
I used to watch a lot of activism on TV when I was younger. You had shows like Monty Python’s Flying Neoliberalism, or Jasper Carrott’s Capitalism Smackdown, and I used to watch them on repeat, memorising all the chants. Then as I got older and moved to London, I heard about all these open-mic activist nights around town, where anyone could get on stage and protest for 5 minutes. So I made a few calls and booked some in, and of course you’d get ever so nervous before the gig, but as I did more my five minutes moved to 10, and before long I was taking an entire occupation up to the Edinburgh festival. I took over a branch of Gregg’s in the town, which Chortle gave a lovely 4-star review to. I’ve never looked back, really.

Q) Is it easy to do comedy about such serious topics?
Yeah, it is for me, because I come from a long line of satirists. My great great grandfather, Dicky “The Dick” Coltrane, was one of the old music-hall satirists in the East End. One of his sketches about Archduke Ferdinand was so powerful that he ended up stalling World War I by an entire month. Sobering to think how many lives were saved, thanks to one simple sketch about a world leader, a bag of feathers, and a giant magnet…

Q) What project have you done that you are most proud of and why?
Probably the time I temporarily changed my name to Edward Snowden, had massive facial re-constructive surgery, leaked the biggest intelligence story in history, and then had all the surgery reversed to escape detection. At the time of writing they think I’m on a plane to Bolivia. Ha! Idiots.

Q) How important is independent thinking and doing and where do you get it from?
Independent thinking is important, but sometimes I think it’s gone too far the other way. For example, did you know that there are men called Keith who are allowed to vote? I’m not sure what I think about that. Can you think of a single trustworthy Keith? Keith Chegwin, Keith Sweat, Keith Floyd… no no, it simply won’t do.

Q) What is the key issue for you right now?
A lot of my friends are very passionate about a woman’s right to chews. Can you believe that in the 21st century women aren’t even allowed to buy sweets? It’s stupid. I can see why my friends campaign so hard to fight it. As far as I’m concerned, women should be allowed whatever confectionery they want – Chewits, pancakes, even popping candy (I’m a member of the radical-left, and I make no apologies for it.)

Q) What’s next?
Bargain Hunt is coming up on BBC1, and BBC2 has Wimbledon coverage… but I expect that’ll probably be out of date by the time this goes to print, so I can’t help you with that one. Sorry.