A look at the FKA twigs x Google #throughglass collabo 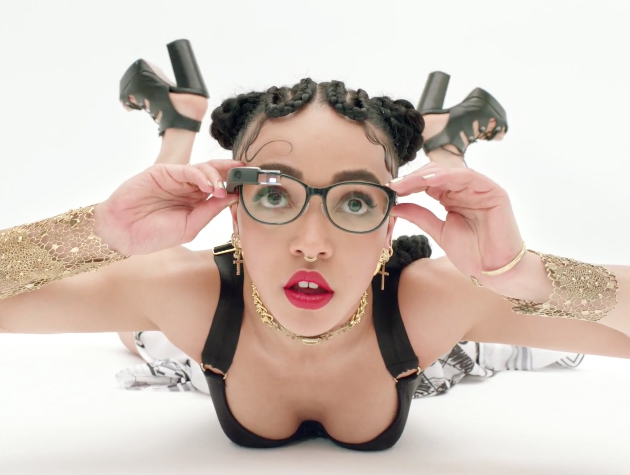 “[V]ery proud and excited to share #throughglass with you, a piece I created and directed featuring my friends Benjamin Milan, Dominant and many other incredible performers.” — FKA twigs via Google+ [of course]

“FKA twigs endorses Google Glass. You hear that sound? It’s the sound of every hipster in the world rewriting their Christmas wish list to include Google Glass.” — Jesse Stoler via Google+ // FKA twigs #throughglass

FKA twigs creates a concept film for Google Glass, working both as performer, director and latest  brand conduit for the Google culture / empire. With an insatiable desire (and ability) to absorb brand equity with the efficiency of a Kleenex tissue, Google prove that the etherial dust that is cultural cache is no harder to capture.

In No Logo (published 2000), Naomi Klein described MTV (circa ’99) as the most compelling global catalogue for the modern branded life. That cataloging system has since been reinvented a billion times over, with Google now processing over 40,000 search queries every second, amounting to over 3.5 billion searches per day (3,977,726,797 Google Searches today and counting) and 1.2 trillion searches per year worldwide (via Google Search Statistics). The term ‘digital omnipresence’ doesn’t even begin to do such figures justice.

In an age where internet privacy issues can become confused with body politics (see. Jennifer Lawrence et al), it should come as little surprise that in the case of #throughglass, such a base-level brand endorsement can be mistaken for genius marketing strategy. But in truth, it doesn’t have to be, as given the ubiquitous nature of the Google brand, any press – even killer robot dog press – means a tick in the win box. Whether FKA twigs’ artistic integrity will be able to survive this hit will depend upon how many of her fans know, or even more importantly, care about such whimsical things as brand integrity:

“This is literally the coolest thing ever omg. <3 I did not know she knew how to whack/vogue.” — Kat Blaque