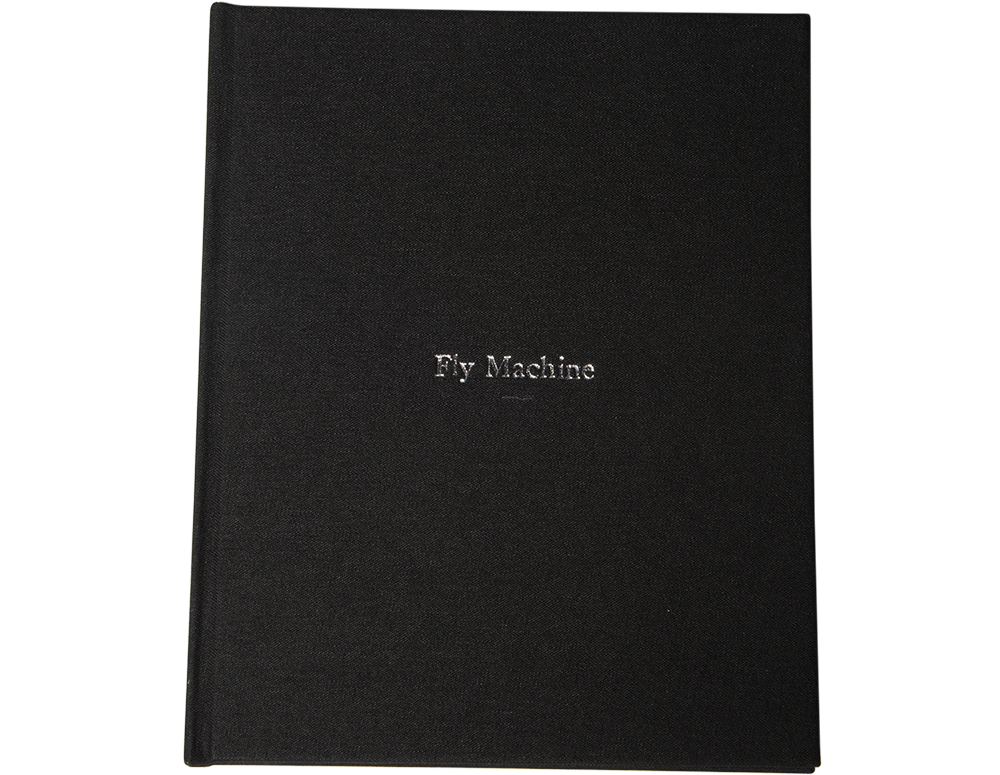 Botswana, from my perspective, certainly has more of a mundane and slow feel to it. I suppose whenever I’m home I do try to find the weird and strange aspects of it.

Botswana-South African Thero Makepe could be described as a multimedia artist-at-large. Primarily using ‘constructed’ photography in his work, the Cape Town-based creative is actively interested in exploring and highlighting ideas of memory, nostalgia and legacies of colonialism. For this, he strives to go beyond the standard practices of his medium. In a conversation about his visual process, Makepe speaks about his artistic preoccupations, past and future projects, perceptions of heroism and the choice to fuse sound art and publishing in his latest book, Fly Machine/Mogaka.

Q) How would you personally define constructed photography, and why is it your chosen form of image making?

Constructed photography, I think, is photography that’s artistic. Photography in which the person behind the lens is showing their voice. It’s complete control of what’s in a final image.

Q) How did your own photographic voice emerge?

When I was a kid, I wanted to be a manga artist. Then when I got older, I wanted to be a painter. I got to art school and I hated drawing and painting under an institution because it was too rigid. I felt it was ruining the intuitive energy and freedom I always got from making art. I had always dabbled in photography in high school, but in university, I eventually chose it as one of my majors. I started making constructed photographs with dioramas and tableaux because I wanted to find a way to express my ideas and show more of what was in my head. I had spent my whole life in Gaborone until I was 19 years old, so that was all I knew. It was therefore difficult for me to express myself taking photographs of places and people in Cape Town, which I didn’t have a personal connection to.

Q) Speaking of which, you travel quite frequently between Botswana and South Africa. Do you find that the character of each of these spaces influences the work that you do while you’re there?

Well, my family lineage comes from both Botswana and South Africa so I would say my life and personality, and not just my work, is influenced by both countries. South Africa has a greater established arts and culture scene and a higher population of artists, so I’m definitely inspired and motivated by my peers, teachers and other artists that I encounter here.

In Botswana, I didn’t grow up going to many museums or art galleries so that was new and exciting for me when I first arrived in Cape Town. Botswana, from my perspective, certainly has more of a mundane and slow feel to it, so I suppose whenever I’m home I do try to find the weird and strange aspects of it.

Q) Nostalgia is a principal theme in your photography project Monna O Montsho, which is a title based on a carving your grandmother used to scare you into good behaviour. Personally, I find nostalgia to be bittersweet. Why would you say it features so much in your work?

Firstly, you’re right. Nostalgia is bittersweet. It’s a longing for the past knowing that one can never actually return to it. For me, [it’s] a form of appreciation, of my upbringing and of my parents and grandparents and everybody in my life that made me the person I am today. I listen to a lot of rap music and probably ninety-nine percent of debut albums are about rappers’ coming of age and all the past things in their life that led to their present.

The look back tends to happen with both fondness and anger. I think I’ve been exploring nostalgia and memory in my work because I’m aware of death and failure; that I could die or live and still not be the successful artist I want to be. If I have one opportunity for expression, what is it that I want to say or show people about myself?

Q) In an image you made earlier this year, three young black men seemed to have been hounded by two white police officers. It’s a curious photograph, considering the fact that Cape Town is a visibly white African city. More curious is one of the hashtags accompanying the photo, which says: police brutality.

I took that photo on my phone last year while I was on a bus. It was an instinctive thing for me to take it. I definitely don’t see myself as a documentary photographer, nor would I like to be one. But I have a voice inside of me that tells me to record information in audio and visual form. So, I kept that photo to myself for a couple of months, debated sharing it or not, and what it would mean for me to do so.

Cape Town is a very violent city to people of colour, I’ve had a bad experience with police in Cape Town before, so that photo meant something more to me. Being aggressively interrogated by police isn’t something I thought would ever happen to me in Cape Town.

Q) Also, one of the lines in your personal profile states that you use photography as a means of exploring themes including your “multidimensional experience as a black male.” Could you use this photograph, then, as an entry point into speaking about an aspect of these experiences as a black man living in a city like Cape Town?

When I first got here, I was taking pictures of big buildings and beaches – the pretty and grand things most people fantasize about. But more and more I’m realizing the importance of image sharing and media narrative, so I thought it was important to share that photo to show other people who maybe fantasize about Cape Town – like I once did – that it’s not all that it may seem.

Q) Going back to your Monna O Montsho project, you wrote in your artist statement, that your hope was to subvert a certain notion created by an incessant portrayal of black parents being violent and brutal to their children in order to discipline them …

Monna O Montsho began with me noticing an idiosyncrasy in my upbringing, which I wanted to bring to the fore. At the time I had just received the titular sculpture as a family heirloom from my grandmother as a gift for my 21st birthday. So, there was an already established narrative and I just had to visualize it in some form. It wasn’t until I started showing the work to other people of colour that I realized the uniqueness of my childhood. This was probably one of the first times I started realizing the power that image-making has from a first-hand perspective – and how the work you make exists in the world around you once it’s showcased and accessible.

Q) For another project on black Buddhist practitioners in Joburg, you mention your intention to show that black people are capable of being spiritual beings beyond the colonial expectations of Christianity. You’ve also mentioned your own preoccupation with the legacies of colonialism. How do these things show up in your work?

The Untitled tableau of the black Buddhist monk was another example of me noticing an unexpected part of the world around me and making a conscious decision to highlight it. It’s knowledge and idea sharing for me at the end of the day, not just art for art’s sake. The further I’m getting along in my burgeoning career, the more I want to speak to people through my art, to facilitate a space for questioning. And, definitely, a part of that is untangling the coloniality that exists in communities I’m a part of.

Q) Your forthcoming book, Fly Machine/Mogaka, is about a Botswana Defence Force (BDF) pilot who lost his life during his post last year. Can you say more about the conception and your creative vision?

The book is already completed. I did it for my 3rd-year exam body of work. It started last year in May when I heard about this tragic story on social media. At the time my own family had been travelling via plane, so the news hit me harder.

Again, it was an instinctive feeling I had that I wanted to make some sort of art about this event. At the time I was concerned with how a media cycle functions in relation to collective memory in this digital age. I wanted to create something that would allow us as a people of Botswana to remember this man and his sacrifice much longer than social media posts and newspapers. To create something tangible that would live on.

Eventually, a book became the best medium. However, the work that I’ve created is an experience more than just a publication. It has an accompanying sound piece and when exhibited it sits on top of a white plinth. In the future, I don’t intend to sell it as a commercial book that can be purchased in stores, I think simply paging through it would take away from the experience. I would prefer for it to exist in an exhibition space, although a limited number of copies will still be printed.

Q) I’m interested in the aural element. How does it work?

When you look through the book you visually experience what the pilot’s perspective may have been. The sound piece gives you that as well with the audio. Conceptually, a very important aspect of this incident is that there is no concrete evidence as to what exactly caused the pilot’s malfunction, so I included narration from a pilot who explained the crash on the day it happened. It was also the first time I heard the deceased pilot being referred to as a mogaka (hero), so I felt it was important for the person experiencing this work to ruminate on that. What makes someone a hero? Would you have done the same?

Q) Would you say there’s a tendency on your part to complicate the medium a bit? Incorporating sculpture in your photography, for example. How important is it to you, as an artist, that you don’t merely repeat standard practice?

Previously, I was limited to making photographic work only because it was my university major. But I do enjoy challenging the medium, especially in this day and age where image making is so accessible and easy to do. I would like to make something that’s unique in its process. I’m no longer restricted or restricting myself to making photographic work alone. It depends much more on the concept or emotion I’m trying to convey. Like I said earlier, I wanted to be a painter or manga artist growing up; so I certainly do still think in those ways.

Q) What projects, if any, are going to be taking up your creative energy and time after Fly Machine/Mogaka?

I’m currently working on my university fourth-year body of work that will culminate in an exhibition at the end of the year. This will be with my graduating class at the Michaelis School of Fine Art. It’s a very exciting project and because of the amount of time I have, I’ve been going down a lot of avenues and rabbit holes. I’m enjoying the process and perhaps that’s better than an end result sometimes.

This interview by Accra-based writer, Moshood, comes from a partnership between Let’s Be Brief and People’s Stories Project (PSP) – part of the British Council’s arts progamming across Africa.

Flying Machine/Mogaka is currently being exhibited as part of a group show titled Botswana Pavilion – No Return at Gallery Momo Cape Town until June 8th.

Deprecated: Function get_magic_quotes_gpc() is deprecated in /customers/3/8/6/letsbebrief.co.uk/httpd.www/wp-includes/formatting.php on line 4387