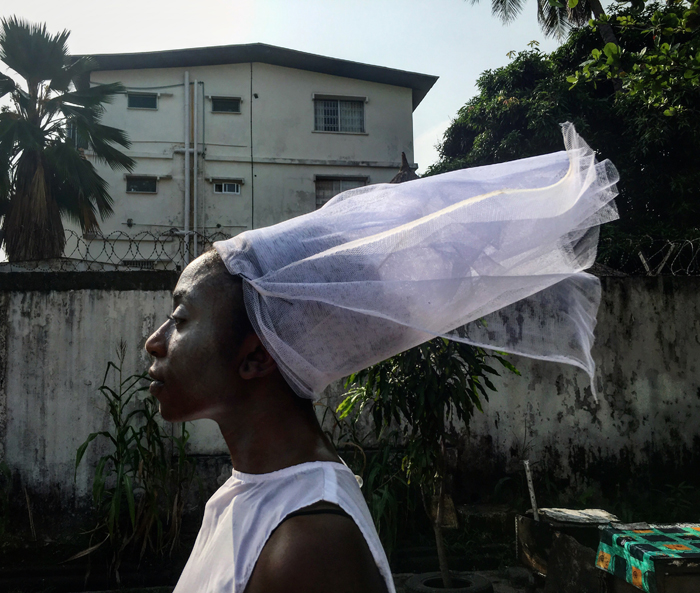 I think of myself as working in a bricolage kind of aesthetic by taking things that are spread out and putting them together to make new meaning.

Twenty-five year old, Lagos-based Tito Aderemi-Ibitola is a multidisciplinary artist, working primarily in performance and video. Utilising installation to explore political issues, Tito is more specifically focused on ‘the intersections of race, gender and ethnicity,’ which she’s highlighted through lecturing as well as showcasing her work in and beyond the continent.

In this conversation with Accra-based writer Moshood, Tito illustrates aspects of her work, her chosen mediums of artistic expression, and her digital interactive display project, Scraps from Mama’s Floor, which won her the 1 million Naira Art X Prize earlier this year.

Q) You’ve expressed a personal ethos of creation with an emphasis on cohesion and collaboration. What do you mean?

That expression is my guiding principle, or an acknowledgement of my style of working. It’s more like a statement, to say this is what I do, rather than an ethos. I think of myself as working in a bricolage kind of aesthetic by taking things that are spread out and putting them together to make new meaning. By that I mean taking one material and allowing tangential possibilities for it to move in different directions. So when I’m saying creation with an emphasis on cohesion and collaboration, it is with a desire to make things come together truly – not just in a way that blends, but also rather like creating a kind of coherence with things that are different.

Q) You use your body as one of your primary tools of artistic expression. Would you consider it a relatively difficult or easy channel?

I started out like most other people who got into the arts – by working in traditional mediums of painting and drawing. At that time I was asking questions like: what is art in this digital age of creation? what is mastery after you’ve learnt the picture perfect rendition? and what can I say next, by using my body? I like what working in digital and time-based mediums allows. To me, that is how working in performance art is understood. Working in time. I use my body as a primary medium because, fundamentally, it is what I’m always carrying with me; it’s a means of communicating that I readily have access to. My body is already loaded with so many signifiers that I can actively deploy to say the things I want to. My body is already a performer in the everyday, so to extend it into a more artistic gesture is what I try to do with my pieces.

Q) You’ve previously said in an interview that your performance isn’t just for people to see, but also for you to feel. Do you find that your impetus for creating borders more on therapeutism or utilitarianism?

When you say utility, I think that’s interesting. And also I don’t know why there’s a hard distinction for you between that and therapeutism. For me, it’s not really a question that I really know how to answer, but I will say that insofar as performance, I’m also a performance studies scholar and a lot of my research is about physiology: what is your body doing in certain moments of your life, how can you recreate these things to get a certain sort of reaction, how can we enter into flow, how can we physiologically change, what’s going on, what are those things that are beyond measure, and things like that. I’m also a witness of sorts, but one who is operating from a certainly different perspective from that of those who’re watching me. So I also get to feel and understand what is going on internally at certain moments.

I think that just from my accent alone, the kind of skin … and the way that privilege is played out in Lagos is still very important.

Q) Do you sense a diminishment of racial awareness when you’re in Nigeria, compared to when you’re in, say, the States – where you grew up? How are these shifting realities reflected in your work?

A diminishment of the way race operates, not necessarily, if you’re thinking about hierarchies of power. I think that just from my accent alone, the kind of skin (the lightness of certain people’s skin) and the way that privilege is played out in Lagos is still very important. Listening to people’s last names and considering the privileges that western or Portuguese-sounding ones tend to allow, compared to those with more traditional last names; all of that has a racial dimension. My own focus is on colonial legacies. I would say that in the development of my video series, Black Tears, I was very much thinking about what’s going on in Nigeria among ourselves as Black people. Even in places like India, where I did a project recently, I’m thinking: ok what does Blackness mean t/here. And of things like the colonial legacies of Lagos, I think about how we still have a street named after a deathly colonialist like Lord Lugard.

Q) Your prize-winning digital installation project, Scraps from Mama’s Floor, is about the experience you had, as a child, watching your mother make your clothes. Can you say a bit more about the project, and if any aspect of it speaks to your focus on gender?

With my mother making clothes, I think about it, as a maker myself, and that she too could create. She was making something ostensibly out of nothing; taking different fabrics and pieces and stitching them into these things that we wore that contained us, controlled us, and moved us in certain ways. So it’s just like a metaphor being extended into an interactive display. Also, certainly my mother becomes a point of interpolation where you can draw extraneous reasonings and several things can come up from her work as a mother, as a mama, as a Naija woman working with her hands, dressing her children, and what that then means for gender. In the dress and in the stitching and in making, there’s an extrapolation that takes place and then finally a honing down of that into a solid realisation of a bunch of things that could have been potentials.

Q) I imagine it to be an elaborate project. If that’s so, has the scale of it given you the time and mind space to be working (con)currently on other projects?

Scraps from Mama’s Floor originally started for me as a large sculpture piece. It’s what I intended to do, and then as I started thinking more and more on the project, I shifted into what I wanted to talk about with this whole digital and the idea of the virtual. And so, as I’m thinking about the ideas that Scraps from Mama’s Floor are bringing up for me, it’s also creating other things that I’m cooking up in my head, simultaneously. Plus, I have other art projects that I do around this same time; so those are also things that I do have to take time out for, and to make.

This interview, by Moshood, comes from a partnership between Let’s Be Brief and People’s Stories Project (PSP) – part of the British Council’s arts programme in sub-Saharan Africa. Click here for more info.