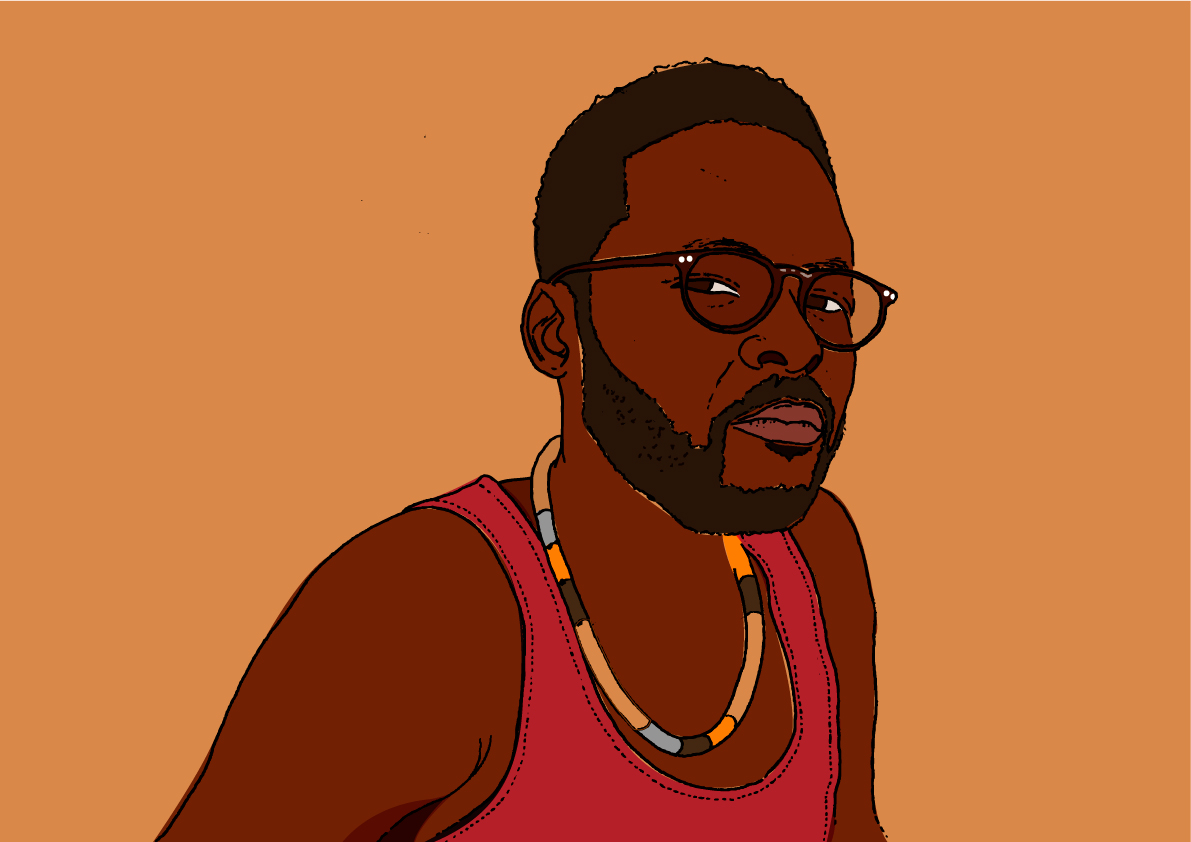 I love all forms of storytelling so as for my title? Depends on the day.

No word seems to cover all the areas of exploration.

A long-time alumni of the Royal Court’s writing programme, Mongi Mthombeni – aka Mongiwekhaya – is an active member of PlayRiot – a collective of activist-driven playwrights in South Africa. With film, TV, theatre, performance and sci-fi aspirations in his creative portfolio, he’s driven by a robust desire for authenticity through storytelling. His work has included the facts and fictions of post Apartheid South Africa, with themes including language, identity and police brutality, all of which underpinned his play I See You – a self described ‘African noir with rays of sunshine’.

In a conversation earlier this year, Mongiwekhaya spoke about his relationship with London, truthful beauty and name checked his broad cultural influences, from Michelangelo to Satoshi Kon.

Q) Mongi Mthombeni vs Mongiwekhaya. Can you talk me through your name?

Mongi Mthombeni is my given name, but Mongiwekhaya is a name that has a lot of stories behind it. Some were told to me by my mother, some I have invented myself. The name was also born out of painful encounters. It’s an invention, an eternal entity, a promise, a legacy… Mongiwekhaya is my calling.

Q) Where do you feel most comfortable … in film, theatre, performance … ?

I’m a creator so I’m most comfortable writing and directing. I have a very strong sense of the visual and the narrative. I do like performing and I’ve travelled the world doing that. I love all forms of storytelling so as for my title? Depends on the day. No word seems to cover all the areas of exploration. I am Mongiwekhaya, director, actor, creator, wordsmith, but my favorite is Fabulist of the Via Lactea. Look it up.

Q) Most people know you best as a playwright …

Theatre is my first love. It has sustained me and continues to do so and does tend to eclipse everything else. I currently have a new play that should be on stages in the next year. I’m also working with other professionals on two new projects for television. Sadly, I can’t report on them as they are in early development. I’m excited about the next two years…

Q) What’s the story with your short film Metatron Cube? It was in post-production a few years ago.

Well, I discovered that science fiction is an extremely expensive genre to play with. We shot a lot of beautiful work and developed a compelling narrative. However we couldn’t finish the film as it relied on heavy special effects—which we could not get access to. There’s a sense of shame around that project. I put my heart and soul into it, as well as my friends’ time and dedication but we have very little to show for it. But, I’ve forgiven myself and learned that failure is where the real learning and growth comes from. I’m more careful in the planning stages of projects now.

Q) Your 2016 play I See You was based on a personal experience that happened during ‘post Apartheid after dark’. How did it feel to showcase the performance in London?

It was eye-opening. I felt like a child. Everything was new. The story was written with a rawness that made it hard to believe it would be well received, but I trusted my director [Noma Dumezweni] and I trusted the Royal Court. They got me through. One of the hardest moments was the response of other black artists in London. Simply put, a young black director saw the play, and spoke to my director. She said, ‘I don’t think this play should be performed. Aren’t you worried it promotes black-on-black violence?’ That comment broke my heart. Here I was, asking black people to speak and acknowledge the violence we inflict on each other and it is taboo to do so. I was so scared. In the end, the content of the play was overwhelming for a lot of the London crowd. But for the Ex-patriot South Africans, it was a glimpse of home and the promise of positive change. I think. But who can say, I’m not in the heads of everyone who watched.

Q) Do you have an ongoing relationship with the Royal Court?

I do. We are discussing the latest work I’ve offered up. Another South African script. Plus, I fully intend to write a special story for the UK. I’ve already started something.

By going out and seeing the wild variation of human life, achievement, greatness and beauty, you can’t help but begin to believe that human life is a wondrous, terrifying, delicate gift.

Q) You’ve lived in and travelled to different places. How has this shaped your world view?

I am predominantly based here in South Africa, but over the last seven years I’ve been on every continent except Antarctica. I am the product of my surroundings, so I have worked to be inside as many environments as I can. One important aspect of my worldview shift is that I have overcome the general neurosis of victimhood. Much of modern thought revolves around “the unheroic hypothesis”, the sense of defeat, or disaster, or futility, that seems to underlie so much of… modern society [sic]’ Colin Wilson, The Age of Defeat

By going out and seeing the wild variation of human life, achievement, greatness and beauty, you can’t help but begin to believe that human life is a wondrous, terrifying, delicate gift.

Q) Has any of your work so far been influenced by the #rhodesmustfall and #feesmustfall movements? Maybe inspiring you to make politically-based changes?

No. On both accounts. To be frank (and I hope we all remember this is a democracy and political opinions do not make enemies of us), I do not believe in the Feesmustfall movement. Yes I agreed with the notion that educational and economic structures must be changed to open the door to all South Africans, regardless of skin color and class positioning. But, the movement has taken on strange notions, like math and science being imperial products of the colonisers. That’s just plain ignorance. It first implies that all knowledge is an invention by white society. Not true. These are languages by which the world can be taken apart, understood and put back together. Before the western world, there were other empires of knowledge and power, whose discoveries fueled the West. For example, do you know who Muḥammad ibn Mūsā al-Khwārizmī, is? An ancient Arab, considered to be the father of algebra. The Egyptians were one of the first cultures to invent writing. No small feat since they invented paper (papyrus sheets) and black ink. They invented clocks (sun dials), the police, cosmetics, toothpaste and so much more. Knowledge is a pool invented by humanity which should be accessible to all. It should not be destroyed for politic purposes. That is evil.

Q) What are some of the central messages at the heart of your work?

Hmm. Well I believe I am here to speak up for a person’s ‘will to live’. That is, a desire so potent that a person will overcome all obstacles to do what others would call impossible. The way to develop this will within you, is to dedicate yourself to a creative life. The purpose of humans is to create. But with that power comes its shadow; the power to destroy. My stories speak about people so desperate to live a full life, they face the greatest challenges, but somehow, they overcome. I am not a nihilist (I despise nihilism). The hope is that the audience responds by creating something of their own to inspire me to keep believing in humanity.

Q) Who do you feel is your main audience when you’re creating work?

I guess I write predominantly for youth culture, but I’ve written for children and I like to write mature content. With I See You I write for black South Africa. My new play Life After Youth is a love letter to the Afrikaans culture. My children’s story All The Colours of The Dark is for anyone who wonders about their place in the Milky Way galaxy. My main audience? Me. And whoever is listening.

Q) Can you name check who or what have been some of the greatest influences on your career so far?

Well. That’s a lot of people and artists. Several of my friends inspire me to push forward. The greatest influence to me is Michelangelo. He truly was the greatest artist who ever lived. I love the work of Alexander McQueen (fashion designer). Frank Quietly, (comic artist), Satoshi Kon (Japanese Anime director), Mary Sibande (South African Artist), Jane Alexander (South African artist), Kwesta, Antjie Krog (the woman is an extraordinary writer) and a whole lot more. One of the best experiences about being in London, was the sheer volume of art available to the public. I spent a lot of time wandering around museums and giant bookstores. What an absolute pleasure that was.

Q) Does the business side of being an artist sit well with you?

It’s been tough on that front. But I’m learning. The trick is to surround yourself with people smarter than you, who love the work you love. I’m getting there. I’m thankful for the friends and support structure around me.

Q) If you could leave a legacy what would it be?

I guess I am quite obsessed with returning the arts scene to a pre-modern era; where form was once subservient to content. These days a lot of work is conceptual. But often it’s not beautiful or truthful. Everything is ironic. Sincerity is treated as a weakness. I hope to leave a legacy of work that really opens up the psyche of South Africa, giving us a true picture of what it was like for us in this transitional time. Though the work will tell specific stories, none of it will be a political cry. I want to leave behind stories that are well told, reveal my people, yet speak to the essential that is within us all. I want to be remembered for telling the truth and telling it beautifully.

This interview comes from a partnership between Let’s Be Brief and People’s Stories Project (PSP) – part of the British Council’s arts programme in sub-Saharan Africa. Click here for more info.