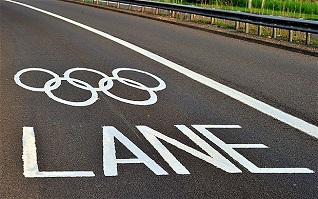 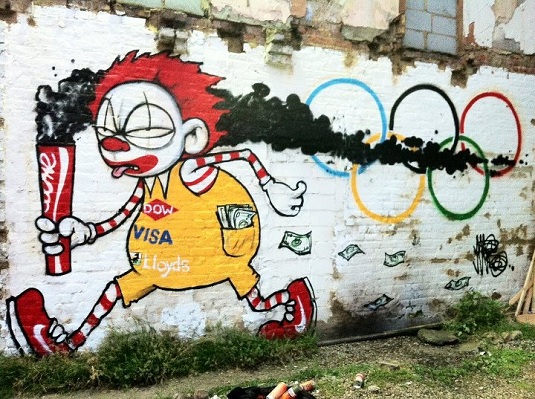 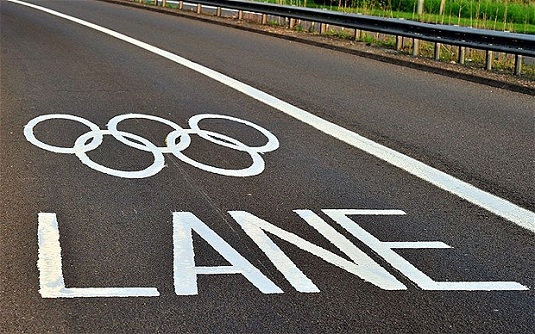 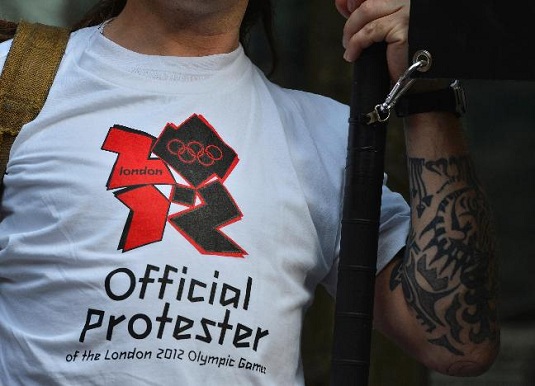 So it’s the end of week 1 of the London 2012 Olympic Games (a banned syntactic arrangement from the list issued by organisers), and it’s now clear to me that Olympics is quite an annoying word to write again and again. That aside, unless you are on holiday avoiding it, there is an unmistakable air of the Olympics in London town. Like it or not, CBeebies and BBC Parliament have made way for wall-to-wall coverage of the greatest show on earth. Despite having no tickets, my bike, TV and my residence in East London have ensured that the events are very much inescapable.

Given that you can see the stadium from my house, last Friday raised a dilemma – to party, or not to party? Hearing that there were big screens in Victoria Park down the road, and with helicopters flying worryingly low overhead, the journalist in me decided to pick up a few beers and head down to take my place among the great unwashed for the opening ceremony.

Strike 1. Gated area, ticket-holders only, and leave your booze at the door.

Thousands of others had heard news of a massive communal telly-watching opportunity, but what we didn’t know was that while the event was free (unlike Hyde Park, where audience members paid £60), they were only letting 5,000 people in on the door. Ticket-holders only. Hmpfh. As a miscellaneous urban voice addressed the crowd behind the metal fence, the rest of the park, and the huge queue, were cast out into darkness. At least we still had our booze…

The following morning, I dragged my bigger half to an anti-Olympics protest which promised to bring together more than 40 groups, including Occupy London and War on Want. It was a bit late to argue with the whole thing, as they’d already done the launch party, but I was interested nonetheless.

The beardy weirdies were out in force, flanked by Socialist Workers and quite a lot of the world’s media, including Channel 4. A stroke of genius by someone, somewhere, had led to the creation of a printable t-shirt stencil that read ‘official Olympic protester’, which looked strikingly similar to the actual Games logo. Which does say 2012, if you hadn’t deciphered it.

While a non-corporatised and non-militarised Olympics sounded like just what I was after, I wasn’t sure the kids of the ALARM anarchist group, who assured me that I ‘didn’t get it’, when I suggested that there were different types of freedom, were the people to deliver it.

Strike 2. Get Ahead of the Games… Wait…

We’ve been warned to stay off the tube for what feels like forever, fearing even bigger crowds than we’ve grown begrudgingly accustomed to. Apparently, that PR message was received a lot more clearly than the one that said ‘don’t get North and South Korea mixed up, they really hate that’. Hotel rooms next to Hyde Park that were £500 a night are now going for less than £100, shops and museums say visitors are down 30% on last year, traffic has reduced by a fifth.

Small businesses, like my local pub, where the landlady told me she’d had the worst day in living memory this week, have been left out in the Olympic advertising wilderness as the big brands, who only put in 2% of the £9.3 billion budget, were given 100% share of voice. I cycled past a pub that had avoided any mention of the Games by chalking a crude, but understandable, podium on the board outside. That’s one for the underdog. I also saw two boys brandishing Visa signs, with no discernible point, other than for people to see them. We own 85% of RBS and we don’t command the same power over what it says and does. If we did, those ‘ISA, ISA baby’ ads would never have seen the light of day…

I’ve been waiting patiently for a knock at my door by a purple-shirted volunteer asking me to fill up an empty seat; asking anyone, as one does when hosting a party, to give the illusion of popularity. You can’t argue with soldiers (unless you are married to one, I’m sure!) getting tickets. But I do know that I barely remember being a child…

In true Olympic spirit (or just for a laugh), I’ve been wapping out the Games buzzwords to see how far it gets me. So far, it’s 1-1. ‘Get Ahead of the Games’ appeared to help when I asked a wandering PCSO if I could ride in the Olympic Lane rather the angry queue of normal traffic. He advised me to ride on the pavement. ‘Get Behind the Games’ did not work on G4S workers at Haggerston Park, who clearly weren’t strict process followers in their civilian lives, but were keen on the ‘process’ of me walking to an entrance at the other end of the park (visible from where we were standing), as bikes were not allowed in the one they were covering. Ughhhh.

Hating
– Medal envy – ignorance of silver, bronze, or even qualifying, as demonstrating significant investment of time and effort
– Not letting the Chinese have their moment – are we just worried that this the first Post-US Games?