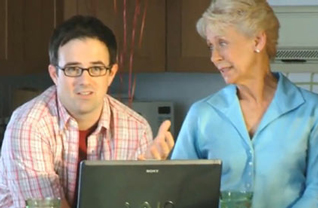 Sometimes in life, you have to sit back and marvel at the kind of disillusionment that goes beyond normal comprehension, so allow me to present to you the Windows 7 launch parties – 6:15 minutes of inadvertent comedy gold that couldn’t have landed further from the proverbial mark if they tried their very best, which we have to assume they have.

For a brand that’s relied on monopolisation of the marketplace rather than customer satisfaction, this kind of disconnect can perhaps be expected. But despite their seemingly all-conquering market share, Microsoft have had their troubles generating the kind of reverential word-of-mouth that Apple have managed to create during their own technological ‘revolution’.

The answer? Encourage you – the user, to invite people – supposedly known as your friends, into your home, where you entertain them with a series of Windows 7 tutorials, as together they learn to change wallpaper, burn CDs and edit photos.

I mean, if word-of mouth is what they were after, then the forced casualness, mixed with the bizarreness of the idea that people will actually host these kinds of parties in the first place, almost make it a twisted act of genius. But it isn’t. ‘Word of mouth’ matters, but the words that come out those mouths matter even more. But don’t take my word for it, watch for yourself. And whatever you do, don’t EVER try this at home.

One response to “Windows 7 Launch Party”